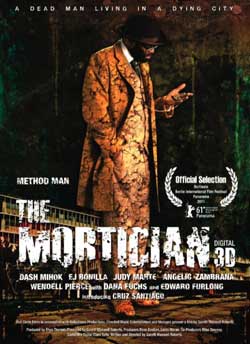 A lonely (and odd) mortician goes about his daily routine of preparing bodies for burial and avoiding other people at all possible until he finds himself helping a little boy escape from a brutal gang leader who murdered the boy’s mother. As the mortician learns about the boy’s ordeal he realizes that he suffered a similar loss when he was a child and the two form a bond. Will the mortician be able to keep the boy safe or will the gang leader kill both of them?

Wow. Let me start off by saying that I was totally and completely moved by this movie. I was expecting some cheesy, half-ass direct-to-video horror flick about a mortician who killed people as he spouted off horrible one-liners but I couldn’t have been more wrong. Instead it was a very touching, sometimes incredibly depressing movie that was a lot better than I would have ever imagined. It isn’t a horror film, and I would even hesitate to call it a suspense/thriller as well (even though there are some elements of that genre present) but I think that even the hardcore horror fans (like me) will like it if they give it a chance. It thought that it was very well-done and there were many things about it that I really liked.

At one time I was a huge fan of IFC and the Sundance Channel (before both of them got mainstream and decided to show nothing but utter garbage 24/7) and The Mortician reminded me of the great films that they used to show on both channels at around three in the morning that I would stumble across when I was having trouble sleeping. As most of you know by now I pretty much only watch horror films (and the occasional superhero movie) but I allow myself an “intelligent” movie or two each year that doesn’t feature someone being cut in half with a chainsaw or getting decapitated by a machete. The Mortician was my intelligent film for 2011.

I think that the main reason that I liked it so much was due to the fact that Method Man absolutely owned the role of the mortician (we never learn his real name). If you didn’t know any better I swear that you wouldn’t even know that it was him as he looks a lot different than he usually does and seeing him play such a withdrawn, socially awkward, depressing character as well as he does came as a shock to me. You can’t help but feel very sorry for the character as he is just a sad, lonely person who has trouble interacting with other people and it is a far cry from the characters that Method Man usually plays. I was highly impressed by how well he does in the role and if the Academy Awards wasn’t just a popularity contest among the same bunch of asshole mainstream actors year in and year out then Method Man would win an Oscar for his performance. I dare you to watch this movie and not feel sympathy for the character, especially when you find out what happened to him when he was a little boy.

While there isn’t a great deal of action going on for the duration of the movie I really didn’t care. It is more of a character-driven film and I actually enjoyed the slow pace (which is pretty unusual for me). I think that the script is just so good and the story is so compelling that you find yourself so involved in it that you really don’t even notice that there isn’t a great deal of action taking place. I just enjoyed watching the mortician go about his day-to-day routine as the story slowly developed involving the little boy that ends up changing his life in the end. Some people may think that the majority of the film is boring and a little too slow, but I personally didn’t think so at all. I was hooked from beginning to end and not once did I find myself feeling bored or feel tempted to skip ahead to the next scene. 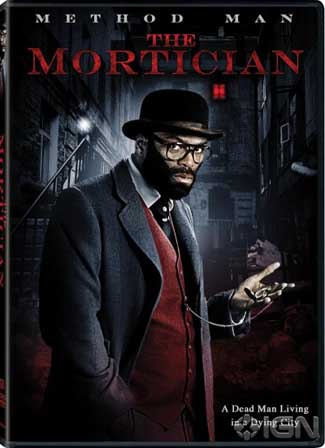 The Mortician was just a great movie in general and I was glad that I got the chance to see it. It was nice to take a break from the zombies, werewolves, demons, masked killers and all the other characters that usually appear in the only movies that I usually watch for one night. It isn’t for everyone, as I have a feeling that some people will think that it is a little too sappy, but I for one really enjoyed it. If you aren’t quite in the mood for a horror flick then I suggest you pick this movie up, just be warned that it is very, very sad at certain points so keeping the tissues handy may be a good idea (because it will make you cry, you perverts).