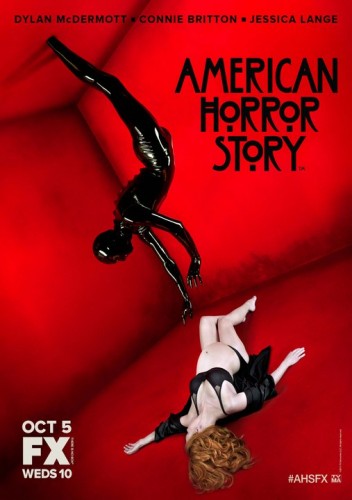 A family of three move from Boston to Los Angeles as a means of reconciling their past anguish. They move to a restored mansion, unaware that the home is haunted.

Per the AHS website:
American Horror Story revolves around the Harmons, a family of three who moved from Boston to Los Angeles as a means to reconcile past anguish. The all-star cast features Dylan McDermott as “Ben Harmon,” a psychiatrist; Connie Britton as “Vivien Harmon,” Ben’s wife; Taissa Farmiga as “Violet,” the Harmon’s teenage daughter; Jessica Lange in her first-ever regular series TV role as “Constance,” the Harmon’s neighbor; Evan Peters plays “Tate Langdon,” one of Ben’s patients; and Denis O’Hare as “Larry Harvey.” Guest stars for the series include Frances Conroy as the Harmon’s housekeeper; Alexandra Breckenridge as the Harmon’s housekeeper; and Jamie Brewer as Constance’s daughter.