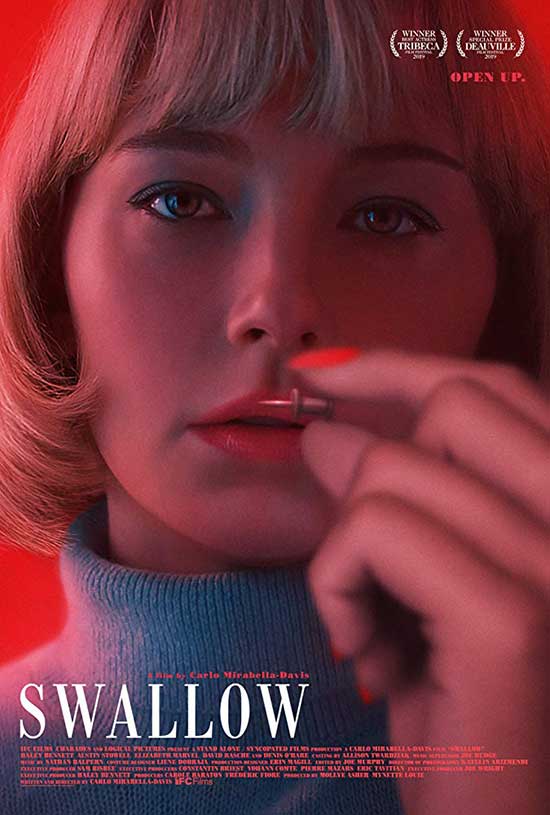 On the surface, Hunter (Haley Bennett) appears to have it all. A newly pregnant housewife, she seems content to spend her time tending to an immaculate home and doting on her Ken-doll husband, Richie (Austin Stowell). However, as the pressure to meet her controlling in-laws and husband’s rigid expectations mounts, cracks begin to appear in her carefully created facade. Hunter develops a dangerous habit, and a dark secret from her past seeps out in the form of a disorder called pica – a condition that has her compulsively swallowing inedible, and oftentimes life-threatening, objects. A provocative and squirm-inducing psychological thriller, SWALLOW follows one woman’s unraveling as she struggles to reclaim independence in the face of an oppressive system by whatever means possible.

Written and Directed by: Carlo Mirabella-Davis.

We meet this picture-perfect couple and they live in this home that looks like it fell out of Architectural Digest magazine. Hunter Conrad (Haley Bennett) and Richie (Austin Stowell) are the picture-perfect couple that will be living in this house. Richie’s father is hosting a beautiful dinner party. The lamb and bean meal with a cabernet felt like a light Silence of the Lambs homage. The lamb being slaughtered. Richie will be a managing director in his fathers’ company.

Hunter is doing random things to pass time. She makes some dinner for her and Richie, she plays on her phone, watches TV. Haley plays Hunter well. She is a tad bit like a Stepford wife. Her mental health and the fact that Richie doesn’t quite see her. They are sitting together having dinner but Richie’s mind is elsewhere. The excitement of Hunter finding out she is pregnant changes some things. Elizabeth Marvel from Lincoln, Burn After Reading and True Grit portrays Katherine Conrad, Richie’s mom who tells funny stories about Richie as a baby. David Rasche, Burn After Reading, Men in Black 3 plays Michael Conrad, Richie’s father. He is stern and completely into business.

Hunter zones in and out as she is again ignored while telling a story about her own childhood. She starts crunching on ice and now her husband and his parents are giving her the “what is wrong with her” looks.  You start to feel for Hunter. (I want her to speak up and say something but I digress.)

Hunter begins a new project and her mother-in-law is delivering self help books. Hunter offers Katherine lunch but instead Katherine declines and offers Hunter a bit of an insult. Hunter is left to her devices and looks through the self-help books then she heads to a box of random trinkets like marbles, a lock and she picks out a shiny marble and swallows the marble. (This is a completely different lifestyle change.)

I’ve seen those shows where people eat strange things, toilet paper, flour and of course the folks who swallow swords and fire. This is interesting. Hunter got her marble back. She is now eating cheese balls while watching a video about eating your placenta has benefits. Katherine invites Hunter over and well she is throwing some insults and helping Hunter in a way.

Katherine asks her the question, “Are you happy?” She is happy? She looks like a robot as the fake smile appears. Hunter is vacuuming with aggression. (The way you vacuum when you have seven million things to do and you HAVE TO Vacuum!) She sucks up a thumbtack and well…. She wants to swallow it. (Don’t swallow thumbtacks folks. #HelpfulHorror )

The thumbtack is calling her. It sits on her pristine countertop. The scenery, the music, the shots. The light moments in Swallow are so good. Well, she swallowed the thumbtack and her smile seems better. The psychological factors in this movie with mental health are insane. (What happens when she has to get the thumbtack out the same way the marble came out? I am concerned.) 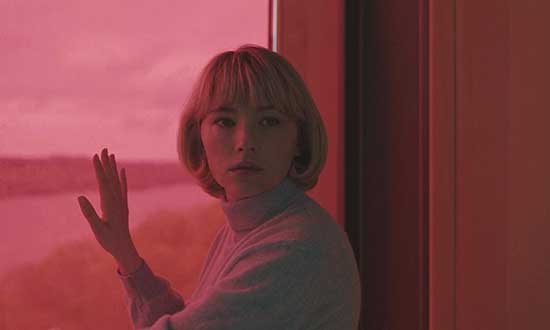 She got the thumbtack! Aaron (Babak Tafti) works with Richie and he wanders into the house for a hug. Aaron tells her that he is lonely. This seems like it was beneficial for both Hunter and Aaron. Oh, she has a battery now. Hunter is just swallowing all sorts of things for her happiness. She is eating the self-help book. Is that part of the self-help? She created a sort of tribute to all the little things she has swallowed so far.

Time for her baby’s ultrasound and the nurse found something else besides the baby. They pull several things out of her. They take Hunter to a psychiatrist. Michael is paying so he wants RESULTS! The power and not caring at all, its such powerful scene. Katherine is now giving Hunter a new lifestyle and she is going to help Hunter start juicing. Katherine also gets Hunter a live-in nurse, Luay (Laith Nakli).

This all seems like it would help if there was care involved. Hunter gets frisked to use the bathroom and she has a stash. A stash of things she can swallow in the bathroom. Richie’s having a birthday and the tacky friends have comments for days. Bev (Nicole Kang, Batwoman, You). Hunter shares a secret with Dr. Santos (Maya Days, True Bloods, Damages plays her beautifully.) Dr. Santos is telling Richie everything. Apparently, confidentiality doesn’t apply to anyone at all. Hunter gets a moment of happiness being in the dirt planting flowers. (I also recognize the panic attack Haley Bennett’s character Hunter is having. It is a horrible feeling.) (“No shit Sherlock.” I haven’t heard that in a while. It was good to hear it.) Hunter’s panic attack leads to a moment with Luay. 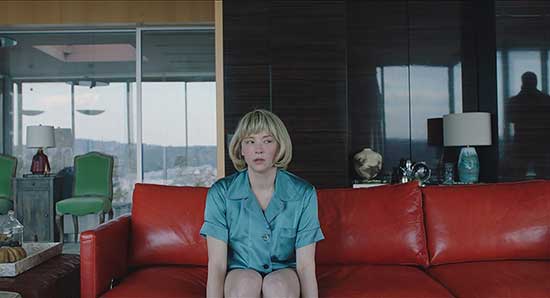 The amount of care and poise Haley put into this character is great. Carlo Mirabella-Davis takes us along on this ride, the story is unique yet speaks volumes for what is going on in society. Sometimes people don’t get the help they really need. They are lost or overlooked. Now, the family is sending Hunter away to a psychiatric hospital. Austin Stowell plays Richie cold but there are tender moments. Austin does a good job with this character.

Luay seems to have more compassion for Hunter. He helps her escape. This was rather unexpected, an escape. She needs a ride now if she will escape. This took a completely different turn. (Where did they get the Pay Phone from?) Denis O’Hare, Dallas Buyers Club, American Horror Story plays Erwin, Hunter’s “father.” Lucy played so well by Luna Lauren Valez, Dexter, HBO’s Oz, Blue Bloods.

Hunter gets some peace about her past. That is always a valuable life-lesson to move on from the past. You have those memories, traumatic events, things that happened but they can make you stronger or they can break you down. Hunter’s decision seems to have made her stronger. This was a one-of-a-kind movie. Swallow was beautifully filmed. It left a few unanswered questions but if you want a good movie to watch, go ahead and watch Swallow.