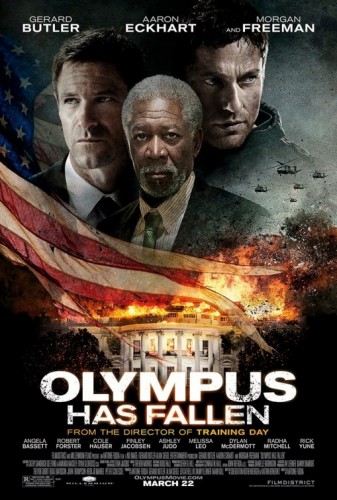 Months after being relegated to desk duty after an unavoidable accident costing the United States its First Lady, ex-secret service specialist Mike Banning (Gerard Butler) finds himself drawn back into duty when terrorists attack the White House taking the President of the United States, Benjamin Asher (Aaron Eckhart), hostage. With the world on edge and the villains gaining the upper hand, it is up to Banning alone to rescue the President and save the World from nuclear war.

With Olympus Has Fallen, director Antoine (Training Day) Fuqua has crafted an 80’s/90’s Hollywood-style action flick that would fit nicely between Lethal Weapon and True Lies on any film fan’s DVD collection. The film is a frenzied cross between Air Force One and Die Hard. In fact, the film has so much in common with the latter movie that the film’s star, Gerard Butler as Mike Banning, comes across a modern day version of Willis’ John McClane. There are numerous scenes that are beat for beat in line with the 1988 action favorite; it’s just in 2013 each scene is now ramped up to eleven throwing in the high impact disaster expectations set into the audience’s mindset by Independence Day, The Day After Tomorrow and 2012. Extraordinary is the rule, mundane is the result. Olympus Has Fallen, for all its exciting and fast-paced action set pieces, is truly tiresome. It struggles to dig itself out of its own grave of familiarity and lack of originality even though the film is expertly shot, focused, well acted (for the most part) and breathtaking. In the end, it is difficult not to think of it as Die Hard in the White House. 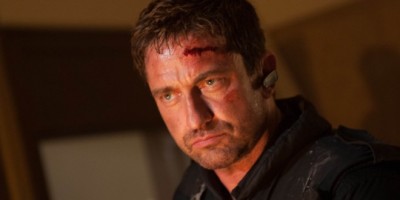 The film centers around an ex secret service specialist, Mike Banning (Butler), who reluctantly has been assigned to a desk job after he fails to save the First Lady in a horrific car accident 18 months prior. On a quiet, uneventful day in Washington DC, the White House is attacked by a large, well-organized group of international terrorists lead by the enigmatic Kang Yeonsak (Rick Yune) who manages to capture President Benjamin Asher (Aaron Eckhart), the Vice President (Phil Austin) and the Secretary of Defense (Melissa Leo) in the basement bunker. Banning finds himself in the thick of things managing to slip past the terrorists infiltrating the White House to rescue the President’s son (Finley Jacobsen), the President and, perhaps, the world as well, a world which Kang has placed on the brink of nuclear war. In the meantime, military airships crash on the Mall and into the Washington Monument, Army helicopters exchange fire with an advanced arsenal placed on the White House roof and Banning single-handedly picks off the terrorists one by one in brutal, bloody fashion. From the Pentagon, Speaker Allan Trumbull (Morgan Freeman) as acting President works secretly with Banning to save the day. 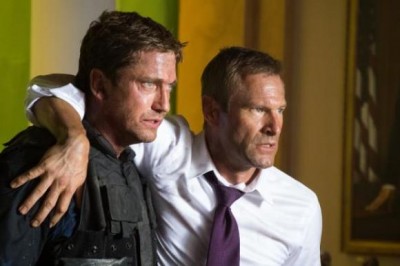 Gerard Butler returns to action hero status, having famously played the Spartan Leonidas in Zack Snyder’s film version of Frank Miller’s 300, with the role of Mike Banning in Olympus Has Fallen. He comes across as if Arnold Schwarzenegger (in his True Lies days) were cast as John McClane mixed with a healthy dose of Jean-Claude Van Damme. He’s an impressive force. He is not someone to muck with. When the film decides to travel into well worn action film territory or become too far fetched for its own good, Butler keeps the film’s momentum moving forward with his performance. With his loyalty to President Asher (and to country) and his affection for the President’s son, Butler gives his hero the much needed soft side, a spark of humanity that keeps him recognizable and less machine-like. Unfortunately, his relationship, separation and reunion with his wife, Leah Banning (Radha Mitchell) during the course of the film isn’t as well structured and executed as his man-crush on the leader of the free world. Oddly the most important relationship in his life comes across forced and cold, much like how the film treats every human being in the film. He also handles the wit of the dialog with ease and charm where he assures young Conner its just a “false alarm” after he single-handedly takes out a heavily armed terrorist just out of the boy’s view or he faces off against Kang on a monitor screen promising to “stick a knife into his brain.” 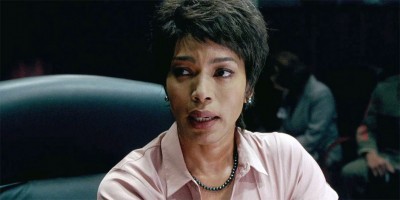 Unfortunately, everyone else comes across as underused while giving the film their all with one major exception. Melissa Leo stands out as the feisty, ornery, Secretary of Defense. Her stand against the terrorist is ridiculously preposterous but cinematic-ally rewarding and enthusiastic. It is difficult not cheer her on as she stands up to Kang as best she can putting country and loyalty ahead of her own well fare. She provides the film with a rare glimpse of humanity and courage (outside of Banning). Aaron Eckhart is underused as the President. He is shown as a capable hero during the opening scene but is never allowed to become a hero, at least physically, once captured by Kang. He is also separated from his son, a brief, wasted emotional tie for much of the second act. His best scene comes when interacting with Leo’s Secretary of Defense. Morgan Freeman, Angela Bassett and Robert Forster are relegated to minor supporting roles, each sitting in a militarily war room housed in the Pentagon, left to watch the action from a distance and bicker needless with each other. Rick Yune makes for an imposing and ruthless villain as the terrorist Kang. However, Dylan McDermott, who is spectacular in FX’s American Horror Story, gives a disappointing and lazy performance as Dave Forbes an ex Secret Service agent, and friend of Mike Banning, now working with the South Korean Foreign Minister also captured along with the White House staff. It’s a thankless role with no depth, meaning or purpose. If his role was left on the cutting room floor, the film would be no better off or no worse for it. 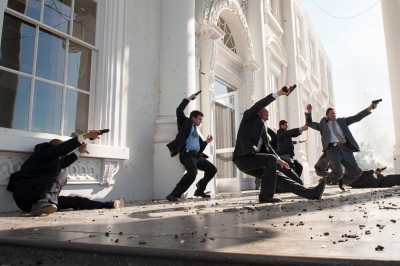 Olympus Has Fallen is primarily, and singularly, an action flick, and one styled after many favorite action films from the Eighties and Nineties. The film is unapologetic with its bloody and brutal violence. No one is spared. It has some of the best choreographed American-filmed fight scenes of late: the gun play is intense and fierce; the hand-to-hand combat has punch and impact; the heavy artillery is big, loud and mighty. The film has everything: explosions, air fights, guns, knives and brutal neck-snapping, up close brawling. The only thing it is missing is a car chase. It is curiously odd that so much results in so little, it’s all so much overkill. More so than many films of its ilk, Olympus Has Fallen feels very desensitized to the brutality and devastation it portrays on screen.

The film also suffers from “Hollywood-itus” with the vast destruction displayed in Olympus Has Fallen as well. The movie plays out like a disaster film for much of its first act, destroying city streets, the Washington Monument and the White House itself. Having seen highly recognizable national buildings destroyed on screen over the years again and again, these visuals are becoming trite and mundane no matter how spectacular they are executed or rendered. It almost feels pointless and careless, a cheap way to incite feelings from its audience without earning it. Without a doubt, when the attacking military bomber shoots up DC streets and then crashes into the Mall, the visuals are spectacular and amazing, but they come across hollow and boisterous without weight and consequence. After the fact, the destruction is given very little mention (to be fair the film switches to deal with the White House and its destruction instead). Regardless, the film delivers on its promise and it is gripping as the action sprawls across the theater screen.

Olympus Has Fallen is a good film mired by a derivative script and cliched visuals. It is so similar to other films, it frequently pulls attention out of the film. When McDermott’s Forbes faces off with Butler’s Banning midway through the film, it plays out nearly identical to the scene in Die Hard where Bruce Willis’ McClane meets Alan Rickman’s Hans Gruber for the first time. Banning climbs secretly around the floors of the building, ends up on the roof, chats wittily with the villain using a walkie-talkie and offs the bad guys one by one. He even has an uncomfortable, forced reunion with his wife at the film’s end. Butler is one “Yippie Ki-Yay” away from a bloodied, white wife-beater and a series of bad sequels. It is difficult to discourage action fans from heading out to see Olympus Has Fallen as it provides exactly what it sets out to do, giving its audience a face-paced, exhilarating, action-packed thriller. It excels at that, for sure. But for those who have seen countless other very similar action films, the film barfs up cliche after cliche. Gerard Butler makes for a strong, powerful and fierce hero, who also stands for loyalty, country and family, he is incredibly easy to root for. The film gets the hero right and knows how to up the stakes. If nothing else, the bad guy, Kang, means business and is a formidable villain. Olympus Has Fallen is worth watching for Butler’s strong return as the action hero and for the action surrounding the mindless carnage dished out, but for little else.