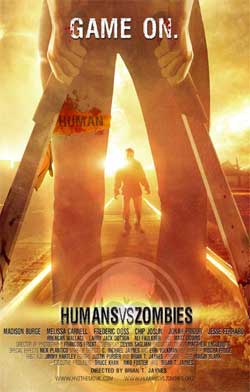 Based on the “Live Action Role-Playing” game of the same name. Students on summer break are exposed to a deadly virus that is spread rapidly through direct human contact. The infected become enslaved by the invading “swarm” intelligence and driven by an insatiable appetite to consume human flesh. Returning home, the students spread the infection to their fellow classmates and other unsuspecting townspeople. One by one, more students fall victim to the plague,triggering an epidemic that spawns a horde of ravenous zombies. The zombie horde grows and spreads quickly. Amidst the chaos, a campus security guard,obsessed with conspiracy theories, leads a group of students to safety as they and a small band of uninfected townspeople set out to find other human survivors in an attempt to discover the source of the “zombie” virus and save the world.

You really can’t get any more to the point with a title like “Humans Vs Zombies“. But I’m sure your wondering if despite the title it lives up to the standards of the zombie genre film material? Now before we get into the film itself, it deserves a mention that the theme is actually a game played on college campuses between frat boys with a whole rule structure already in place. This film by the same name also incorporates a campus-playing theme in its beginning suggestively making a connection between the 2 aspects of the “Humans Vs Zombie” foundation.

The fictional association comes when a viral outbreak (there’s a new idea) is released by a lab per an experiment gone wrong. The modern culture of our present day oil spill is explained as being a cover up for a more diabolical agenda. Mainly the extermination of much of our race to control the world population. Conspiracy theorists have been aware for quite some time, and now the fiction becomes reality in this zombie universe with people becoming flesh eaters and savages. Sometimes I tend to wonder if this was actually possible if our own government might do “just” the same thing to our society. 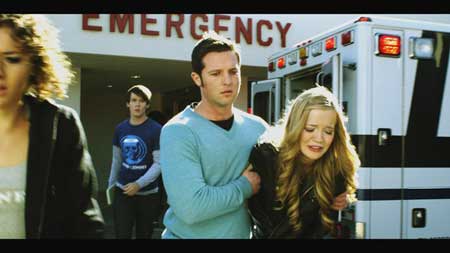 But moving on, we are joined with a fun bunch of campus bro’s and young hotties. Dora Madison Burge plays the role of Tommi or Gamergirl known for her online wisdom and hot appeal to young game playing fan boys. She downplays this notion which in turn seems to do quite the “opposite” for her. Jesse Ferraro who plays the resident jock James picks up on this attraction only to be rejected time and time again. Though I knew with the degree of determination his character has that he’d eventually win Gamer girl over with pure sensitivity.

Jonah Prior plays Danny, a young college kid who’s confidence seem to be lacking in the girl acquisition department. He plays on this innocence while trying to win over his love interest Amanda (Melissa Carnell). Chip Joslin is our resident Jack Black look alike in more ways that one. As Brad he seems to fill the role that Jack Black might if the production could afford him. Though make no mistake, Joslin provides a healthy does of comedic relief and wild antics really upping the game of this film. Frederic Doss plays Frank, the resident militant conspiracy nut who is coming of age within this sudden breakout. What I mean by that is that his theories are all coming full circle of which many scoffed at him prior.

The group is pretty well rounded and actually all seem to gel in ways that many of these ensemble casts don’t. It’s hardly Zombieland material and while you might catch yourself fading away ever so often it still manages to bring some fun to the screen. Brian T. Jaynes directs this zippy zombie inclusion who has gotten his feet wet on a prior film by the name of “Boggy Creek”. 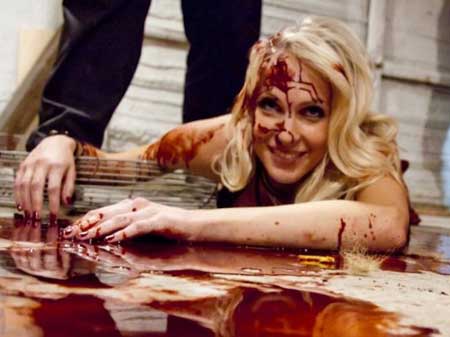 The FX range from decent to cheesy with the makeup usually being simple spray paint applications while the kills are saved for the more elaborate FX work. I think you’ll probably agree that while the zombies could have looked better they get killed off pretty well.

“Humans Versus Zombies” which is meant to real-in on the campus game by the same name is not a bad film at all. It may not make it to your zombie top 10 list with the Romero’s and Fulci’s but it has a dark humor and plenty of messy chaos to please any zombie fanatic. I’m not so sure I’m happy about so many films being zombie themes these days, though it does build a collective for comparison. At least Humans Versus Zombies is fun and makes you smile. That’s alot more than I can say for many of these Walking Dead cookie-cutters.