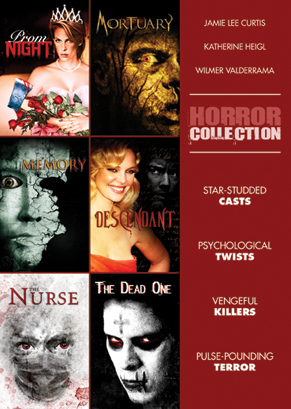 Check out this new 6 film collection from Echo Bridge Entertainment! If you’ve been following their releases, you already know that these sets offer a pretty good night of entertainment. This latest set includes the 3 new titles (at least from what I can tell) of “The Dead One”, “Descendant” and “The Nurse”. These accompany the classic “Prom Night” featuring Jamie Lee Curtis and Tobe Hooper’s “Mortuary“. It also includes “Memory” starring Billy Zane

You can access their product page directly at Echo BridgeThe film summaries are below:

MEMORY
When Dr. Taylor Briggs is exposed to a mysterious drug while lecturing in Brazil, he is forced to relive the dark, twisted memories of a killer whose work may not be over. Starring Billy Zane and Dennis Hopper.

THE NURSE
Vowing revenge, nurse Laura Harriman sets out on a psychotic killing spree after her father kills himself, targeting the man she believes is responsible—a recently paralyzed and mute stroke victim.

MORTUARY
A family moves to a small town to run a long-abandoned funeral home, only to discover that something evil lurks there—something that raises the dead and feeds upon death itself.

THE DEAD ONE
Controlled by vengeful Aztec gods, 21-year-old Diego is forced to find a human sacrifice, only to discover the one they want…is his girlfriend.