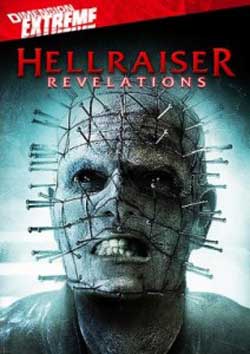 Two friends in Mexico discover the Lament Configuration and unleash Pinhead, but one decides to try to survive by swapping himself with someone else. Once they go missing, family members go in search of them, but find Pinhead instead.

Waiting on the next viable Hellraiser event has seemed almost too painful for an industry that once embraced everything Cenobite. Much like the legacy of Freddy Krueger, Pinhead has lost fan base over the years by a slew of mismatched scripts and movie premise. This latest attempt completely discards the Doug Bradley version and invites a newcomer. Stephan Smith Collins to be exact.

So on first announcement, I will say that my curiosity and interest was peaked. I’m not a supporters of remakes, though with the fall of Pinhead, maybe the franchise needed a kick in the ass. I think “maybe” is an understatement. 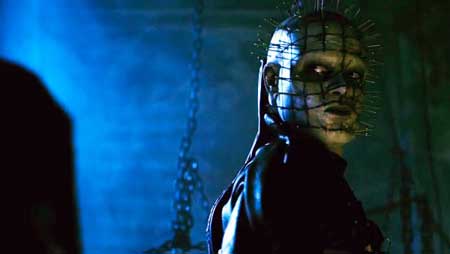 Now I will tell you that I’ve been a huge fan of the franchise. Even to the point of being “more forgiving” than other reviewers might fare. Call it a need to find the horror within or just trying to resurrect a long gone anti-hero of mine

To be fair on this release, I thought it would be pertinent to point out the bad vs good points. Even with the rash of dismissive reviews that don’t care for the film at all, it does have a few great elements to it. 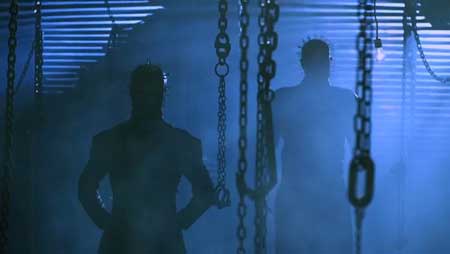 Hellraiser is a franchise, that has long been coveted by horror fans. When they brought in a new Pinhead, my curiosity was peaked, though when I saw the end result, I was more disappointed. The costuming, the voice and the manner is pretty dead on. In fact after hearing Collins speak, he may have been very chosen on vocal tone alone. Though Stephan Smith Collins isn’t Doug Bradley and like the case of the new Freddy Krueger, the character just doesn’t feel like the “same” horror icon as we’ve grown to love. Stephan Smith Collins reminded me a bit like Pinhead’s cousin or such. He is missing that royal prestigious dead eyed stare that Doug Bradley brought to the character and for that I’m calling him just not up  to par. Now some of the Cenobites that were included are pretty cool indeed, though we are also missing a few familiar faces in this department.. The quintessential duo in my mind have always been Doug Bradley and Barbie Wilde. Grace Kirby was the original of course, but Barbie had more flair. 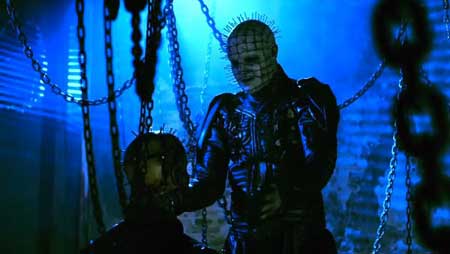 The story line takes an approach back to the original direction. Gone this time are those silly Twilight zone feeling entries taking us back to “those” who desire the “puzzle box” and the suffering that comes with it. I do salute the film for recognizing this need within the series for this return. The premise though feels a little too comfortable and forced. When I say that I’m referring to the setup.

Nico Bradley (Jay Gillespie) and Steven Craven (Nick Eversman) have high tailed it to Mexico to indulge and party. Upon their quest they encounter a “vagrant” who promises them pleasure like no other. He incites them to cross the line between normal experiences and take “on” the puzzle box. This of course always ends up bad, if we haven’t learned much. Nico ends up figuring out the puzzle releasing the demons upon them. 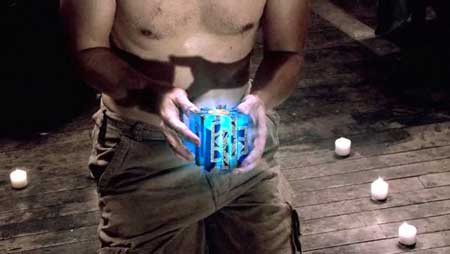 Filmed at first in “found footage” style, they reveal the Cenobites who come calling on tape. Pinhead wastes no time in sinking his hooks into Nico and pulling his flesh apart to the satisfaction of his minions.

Steven, though is able to “escape” and head home with a new lease on life. Meanwhile their rather snooty parents have been having a chat awaiting the return of their sons. This part of the film really slows the pace with some scenarios that seem a bit too much “Beverly Hills Wives” than a suited tension building encounter. Yes, there are reveals about the infidelity of some, that add to the mix, but never does the situation ever feel dirty enough to be in the Hellraiser realm. 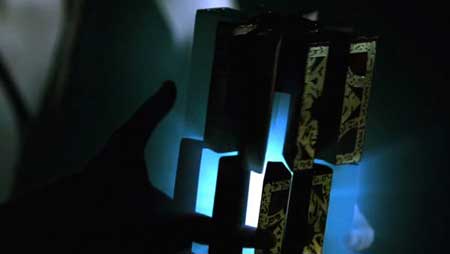 Probably most disappointing is the over acting performance here by Nick Eversman. It feels so forced and amateur that listening to it was painful in itself. Even as he holds shotgun in hand, you’ll want to bitch slap the kid and move on. Then again, any lengthy acting performance that fails to deliver is largely to be blamed on the director himself. (Víctor García)

Now what I did find interesting and somewhat humorous on a lower level was the idea that Pinhead was trapped in this genie box and could hear everything going on. I’m not sure that, “that” idea should have been incorporated. Pinhead’s hell is meant to be more of a realm or inter dimensional hell rather than a bottle that’s been corked. 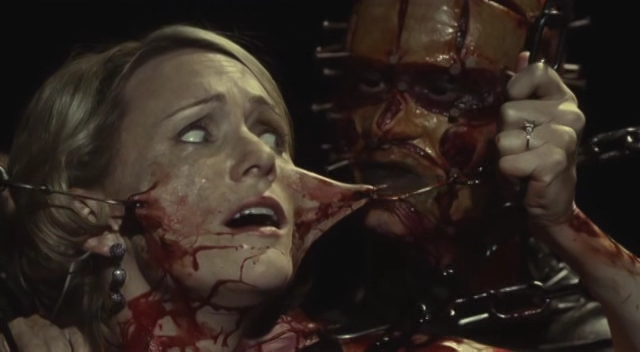 Fans may relate to alot of these elements which align and don’t align at the same time. If horror is in question, then you get plenty of skin pulling, hook flying scenes to add to your psyche. The FX were actually quite good and when used were effective. I think there is a sort of disconnect within the Hell raiser realm that I feel may only be satisfied with a true Clive Barker directed sequel or redo. Hellraiser Revelations adds to the collective of the series but still fails on some issues. Recommendation here? I imagine only diehard Hellraiser fans will want to own for collective reason, but in short…go Redbox rental on this one.