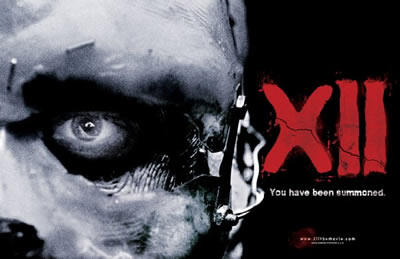 Judge. Jury. Executioner. A convicted felon named Leonard Karlsson is released on parole after years of imprisonment, but not before the other inmates attack him and horribly scar his face. Once free, he begins a horrific series of murders seeking revenge on the twelve jurors who convicted him. One by one, he tortures and strips his victims of their faces. In a small southwestern American town, the remaining, surviving jurors race to escape their fates and the local deputy sheriff and a federal investigator try to locate Karlsson before he can kill again.

With XII, director Michael A. Nickles creates a slasher film reminiscent of the classic films of the Eighties. It borrows heavily from Friday the 13th, Halloween and Texas Chainsaw Massacre series and creates an appropriately eerie look for its killer, Leonard Karlsson – covered in a patchwork mask made from plastic and human flesh covering his own skinless face. He provides the killer with a unique motive and throws in a number of surprises, but in the end the film boils down to the standard final girl serial killer film. The actors do a great job with the limited characters they are given and the special effects are gruesome and bloody. Between to gory parts, a lot of pointless bickering between the surviving jurors attempts to be character development causing the story to loose its momentum. While XII is a fun slasher flick, it suffers from comparison to modern Saw films and slasher flicks like Laid to Rest. 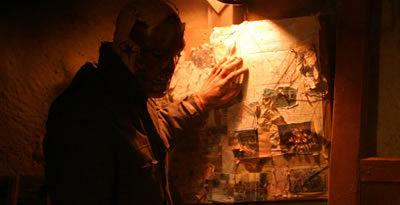 Michael A. Nickles, an actor (Death Becomes Her, Hamburger Hill, Wayne’s World 2, License to Drive) turned director, shows great promise for the genre with XII. He gives the film a timeless feel, equally comfortable as an 80s throwback and a modern horror tale. The film has a good pace and many of the shocks are totally unexpected. He takes the best parts of the script and sets up many scenes to end in a “gasp, didn’t see that coming” conclusion. He also handles the gruesome effects during the film’s conclusion expertly as well, knowing when to linger on a close up or to pan away to a reaction shot. The problems he encounters along the way are mostly due to the script itself having the characters sitting around moaning about their lives and driving past a house numerous times to see if a certain truck is or is not parked in the driveway. 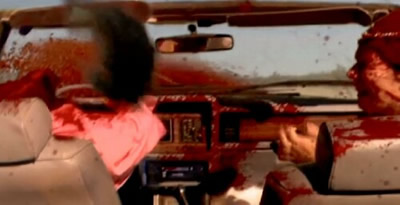 Where the story itself suffers, the special effects are excellent and visceral, especially a surprise effect in the opening shot and the final exploration of the killer’s techniques and M.O. However, in between, the two events, any offerings of spectacle are few and far between. The make-up created for the killer, while heavily lifting from Leatherface in concept alone, creates a memorable and repulsive character with his teeth and bones appearing through a makeshift mask barely hiding his disfigured features. It also ties into the killer’s methods and actions once he has his victims secured to his table. When it comes time for Karlsson to begin cutting the faces off his captives, it is difficult not to flinch and look away. The only problem is that, for most of the film, the effects, the characters and his surroundings feel all too familiar. 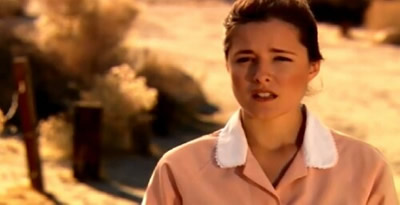 The acting in XII is solid and much better then most direct to video slasher films and standard teens-in-peril films. The lead girls, Emily Hardy and Vanessa Long, have a nice chemistry together and come across as believable friends. Steven Brand brings a subtle and appealing sense of humor to his Agent Naughton character immediately capturing the audience’s sympathy which supports his character arc in marvelous fashion. However, it is Nick Searcy who steals the show with his sarcastic and cynical Officer Kent. The film would have benefited with much more of Searcy’s presence. Jeremy Fitzgerald give Leonard Karlsson a Jason Voorhees stance and movement but with more of a sense of purpose and intent, although, unfortunately, the character is presented as being a little clumsy for its own good. 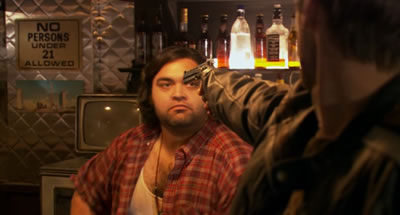 The film, XII, reaches a few high points throughout its run time, but it remains stuck in its own genre. It ends up being yet another slasher film. For fans of slasher films, XII is solid and gruesome enough to deliver the goods, for those patient enough to get through the slower bits in the middle. The acting is top notch, better than typical offerings with Nick Searcy and Steven Brand standing out from the bunch. Thankfully the film avoids the trope of having the killer simply tracking down a group of teens, but it doesn’t do enough with the idea of the killer tracking down the jurors that put him away; it never capitalizes on that idea to build suspense or terror. And that’s the problem that ultimately keeps XII from being a better film; while it is effectively gruesome and shocking, it never aspires to be scary, suspenseful or tense.