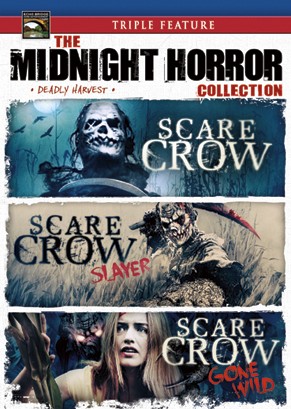 Got a hankering for some “ScareCrow“? How about the full series on 1 set? Ok, you know the series by now…”The Midnight Horror Collection”. I vaguely remember seeing all 3 of these sitting on Block buster shelf for months. Though for some reason, the scarecrow got the backseat to other new releases. It’s always fun to grab a few hours and see which of the series pans out. This set collects all 3, so if you’ve been wondering yourself…here’s your opportunity.

Lester Dwervick is an outcast, deemed trashy and unworthy by his peers at Emerald Grove High School. One night, while escaping the drunken escapades of his mother, Lester flees his trailer and witnesses his crush kissing another boy. Pushed to the edge, Lester picks a fight with one of his mother’s boyfriends and is fatally attacked in a cornfield. But Lester’s soul lives on…in the form of a scarecrow. Now he has the chance to even the score—and make his enemies pay.

Two fraternity pledges head out to a cornfield to capture a scarecrow as part of their initiation. Naïve and young, the boys search the rows for the target…until one of them meets his maker in the form of the deadly straw stalker. Resurrected as the scarecrow himself, he begins a violent rampage from Hell.

Despite warnings from their coach (UFC Hall of Famer Ken Shamrock), the cruel captains of a college baseball team take a group of underclassmen to a cornfield in the middle of the night. Expecting an initiation prank, what the young players get instead is a malicious, soul-stealing scarecrow on a violent rampage. As the rest of the team heads to the beach to enjoy their vacation, the Scarecrow has other plans. 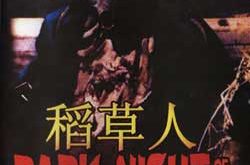