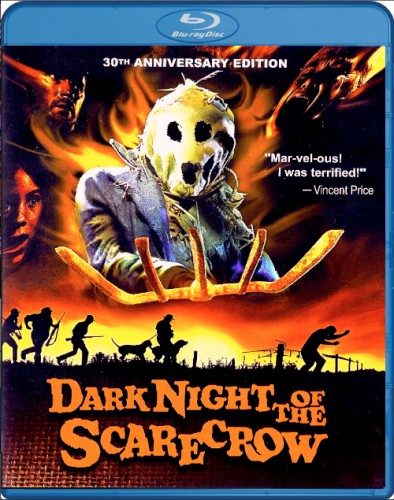 In a small town, a wrongfully killed man exacts revenge on those who murdered him beyond the grave.

The year was 1981 and on CBS a made for television movie debuted in the spooky month of October. Who would have thought that all of these years later, when it finally got the DVD (and bluray1!) release it so richly deserved, it would become a cult classic and one of those movies that would fall into the category of “they just don’t make ‘em like they used to.” 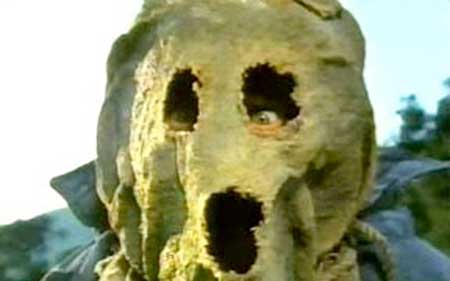 Before the DVD release and before I was able to snag a VHS copy from a mom and pop’s video store that was closing down, the only way to see this was on television, I believe only on TBS but it might have aired elsewhere. For years there was a cry for it to be put out on DVD and then finally, on September 28, 2010, it was. I promptly picked it up and now it sits as a proud addition to my personal horror movie collection. 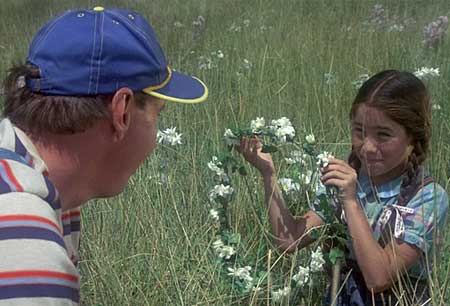 At its heart this is a ghostly revenge movie and oh, what sweet and poetic revenge it is. Bubba Ritter is a mentally challenged thirty-six year old who has the mind of a child. He’s big but has a sweet heart and mind. Afternoons are spent playing with Marylee, a young girl whom he has befriended. Not everyone, however, agrees with this.

Most notably one Otis P. Hazelrigg (played by the one and only Charles Durning), the postman in this small town. He’s just waiting for the day when “something” happens to poor Marylee and then he’ll have the excuse he needs to wipe this “blight” from the face of the earth. 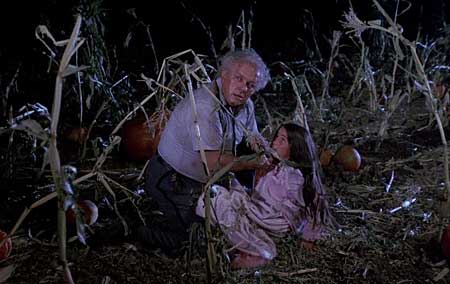 He doesn’t have to wait long. Word quickly spreads that Bubba has killed her and a manhunt is underway. Otis decides he’s going to do things his way and rounds up three of his buddies with perhaps the greatest names in movie history: Skeeter Norris, Philby, and Harless Hocker. If those don’t scream small town vigilantes I don’t know what does.

They find Bubba hiding out in a field dressed as a scarecrow and without further ado pump him full of lead. But word comes over the radio that they may have acted too fast. Seems Bubba was a hero and saved the girl from a vicious dog attack. Oops. 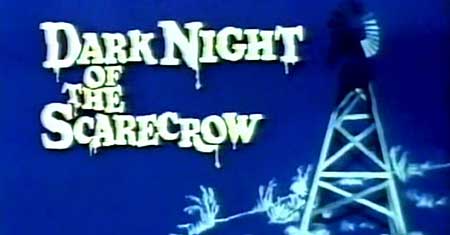 And when the justice system fails and Bubba’s mom screams out, “there’s other justice in this world, besides the law,” you know things will be set right. This is a horror movie after all.

Dark Night Of The Scarecrow is a well made movie with great acting, directing, and plenty of spooky atmosphere. Due to it being made for television the blood is almost non-existent but frankly none is needed in a tale such as this. I would also be remiss not to mention the mask of the scarecrow, very creepy. 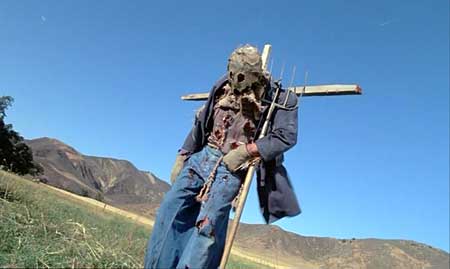 Charles Durning as Otis P. Hazelrigg (love that name) absolutely dominates the screen. I love every scene he’s in, which is most of the film. Everyone else is just as amazing and you’ll recognize some of them. I really love Lane Smith as Harless Hocker and for those with a keen eye you’ll remember him as the prosecutor in My Cousin Vinny. Tonya Crowe, who plays Marylee, was even nominated for a Young Artist Award for her role.

There are also some funny moments in this as well, even if they are unintentional. Look for the reaction in the courtroom of Philby when the case is dismissed. One of my favorite parts of the film but if you blink you might miss it. 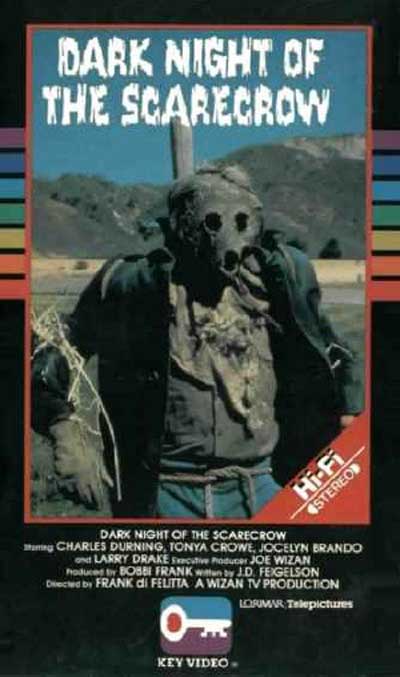 Try and see this, especially if you like the ghostly revenge subgenre, for it doesn’t get much better than this for that category. Some will even think about buying and I couldn’t agree more. I can’t tell you how happy I was when word got out that it was coming to DVD. A classic that deserves all of the praise it gets.