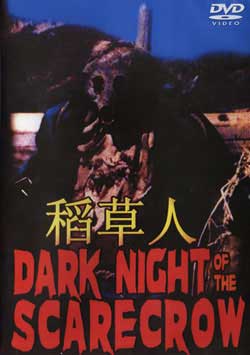 Imagine you’re walking with your friends on a cool Autumn evening. The breeze is crisp and leaves scatter and dance in front of your path as you travel. You guys decide to walk to the corn mazes up the road and see if you can find trouble. when you arrive you all see the silhouette of the cornfields’ infamous scarecrow. He had a creepy sack with eye holes carved in, as if it served a purpose if he could see. Straw stuck out of its jean overalls and it had what looked to be an old fisherman’s hat on. It stood, crucified under the brightly beaming moonlight, still as a statue, just waiting for a visitor.

You friend Tommy wants to take a picture of you and the Scarecrow, you hesitate, but agree. You didn’t want to seem like a downer, so you crept up and put your arm around the broad shoulders of the motionless frame. As a joke you even took the hat off the Scarecrow and put it on your head. The flash bulb illuminated and blinded you momentarily. To your utter horror, you realize your arm is only resting on air now. A wave of fear hits you and the blood rushes to your face. You immediately get angry with your friends and blame them, suspicious that this was a prank. before you can even get the last angry word out, they all go blank and pale. You act unknowing of the reason they are frightened, but in your mind you knew that this freakishly large straw-figure was standing menacingly behind you. All you can manage is a small squeak and you turn around, face to chest with the protector of corn, the harvester of organs, and the reaper of souls, the scarecrow.

What do these corn-stalks hide? They contain the most silent killer known to mankind. The ultimate definition of a “stealthy” stalker among the stalks. This deranged psychopath is so still, it is not even technically living. But maybe this is because you aren’t looking close enough.

Scarecrows in your mind may not be considered monsters in any sort of the word. This is untrue, however, if you look deeper into it. Give your gut reaction, use your intuition when you hear the word or see the face of this masked creature.

The main point that a scarecrow exists in the first place is to provoke fear. The name in itself suggests it. It is common knowledge that farmers in fear of crows damaging their crops put up the men made of straw to keep the pesky birds away. It is also common knowledge that this tradition, and practice is somewhat obsolete. Crows are often seen perching on the cloth-woven shoulders of scarecrows, seemingly mocking the mere fact that they exist.
Humans might have created a monster if you think that a scarecrow that doesn’t scare crows is horrifying. However, they’ve become common around the harvest season, now often being used merely for decoration. Many farmers use newer and more technologically advanced methods to get pests from eating their seeds and destroying crops.

Let’s cut to the chase, scarecrows don’t scare crows, so why would they scare humans? Humans are experts at reading emotions, because we live through them and understand what facial symptoms mean what emotion. The fact that scarecrows have their faces covered, wrapped in a sack with holes for eyes is frightening. Not only can you not read their emotion, but you don’t even know what the person underneath the cloth looks like.

. In fact, In the DC comic universe, Dr. Jonathan Crane used an alternate persona known as “scarecrow” in order to exploit fears on unwilling patients. This character also appeared in the film “Batman Begins”. And this isn’t the only representation of a living scarecrow in films to ever surface. There have been countless horror movies centered on the animation of the creatures made of straw becoming violent and murdering people. A few of these include “Dark Harvest”, “Scarecrows”, and the most frightening of all “The Wizard of Oz”. Although the scarecrow in “Wizard of Oz” is shown with a friendly demeanor, that movie is quite the trip down terror lane.

Humans have the power to create the creatures, much like Frankenstein to his monster. Where and when does it become supernatural, however? This is a very pertinent question to be posed. It could be the result of numerous things, whether it be a curse or even voodoo.

You scurry right between the legs of the behemoth scarecrow and head straight into the shelter of large corn stalks. The only problem was now you didn’t know where your friends were, and if you called out to them the scarecrow would hear you, if it could hear. You furiously push through the corn and breach the other side. You see a large farm house with a porch-light on and bolt as quickly as you can right up the porch. The screen door was closed, but the inside open, you dash in without a second thought. You walk into the dining room of the house and there sits a large burly man with a straw hat on and an unshaven face.

“What’re you doin’ on my property,” the old man hissed. “Don’t you know bad things happen when’ya trespassin’ on other people’s private residences?” You were about to blurt out how something bad did happen when you heard the screen door creak open behind you. You whirled around to see the scarecrow again, even more menacing in the light. You shot a glance back at the farmer for help, who didn’t seem shocked at all to see an 8 foot scarecrow standing in his threshold.

“You stole my corn, he’ll repay you for your sins, ” the man laughed maniacally in his chair as he motioned to the figure. You stood, frozen, unable to do anything. You were hypnotized by the sheer horror, and all you could do was stand and wait for your world to come to an end. 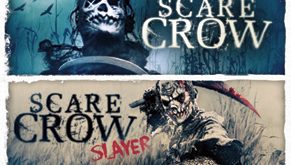