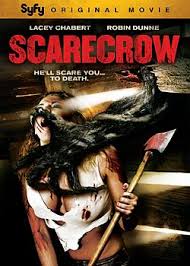 For generations, it was an urban legend that lived in the nightmares of children. Now, the season to rejuvenate the tale will revive a town’s darkest fears.

“It never sleeps, it never dies, it can’t be stopped, hear our cries. The scarecrow lives to kill us all, keep it buried in the fall.” This is the rhyme of the unstoppable scarecrow that the people of this undisclosed farm town chant every year during the scarecrow festival.

And that is the main problem with this movie, it lacks distinction, it seems far too vague, even with the littlest things like naming the town. I know it’s not a huge deal not giving the town a name, but it helps give you a sense of belonging, like the legend was established somewhere. This is even apparent in the title, Scarecrow, it just feels generic. When I first saw this title, it made me wonder if it was a remake of the 2002 movie of the same name, it’s not, but even if you were to have put something like, the legend of, in front of it, it would have made a clear separation between its self and any movie with the same, or close to, title.

I’m getting ahead of myself here; the first thing I should mention is that it is a made for TV, Syfy original. That doesn’t mean that the movie has to be bad if it’s made for TV, it just means you have to be in a different mindset. The movie does open fast, with two teenagers running through a cornfield, they meet in the center, were an old dilapidated scarecrow is rioting on a post. The old scarecrow looks great and you start to think of all the possible ways that it might come to life seeking its vengeance.

This, sadly, doesn’t happen, as the two teens make their way to the nearby barn, to “roll in the hay”. An unstable ladder to the hay loft, send the two crashing through the floor, releasing the evil scarecrow that’s been down there for a hundred years. The rest of the movie is centered around a bunch of stereotypical teens being punished on their Saturday detention, and the love duo of Kristen, Lacey Chabert, and Aaron, Robin Dunne.

There are a lot of sub plots set up between different characters, but none are fully explored, so they feel unnecessary and forced. They are dragged out to the old farm house to take down the rest of the old scarecrow, before the farm is sold off. Right on cue the scarecrow comes after them forcing them into the old farm house, where they, in Night of the Living Dead fashion, board up the house. The rest of the movie is a survival game as all the characters get picked off one by one, as they try to make it back to town.

This movie has a few downfalls, but I think that most of them could be from the Syfy’s channel success with the cult hit Sharknado. This movie was released in July and with the publicity that it received, makes you wonder if movies like Scarecrow weren’t pushed to be finished early while the hype for the station was still high. This movie was released in October, in time for Halloween, but was it shot on a shortened time frame, or corners cut to make sure it was released this year, unpolished and feeling flat, where they could have maybe waited until next Halloween. This might have also explained some of the terrible acting and plot holes. 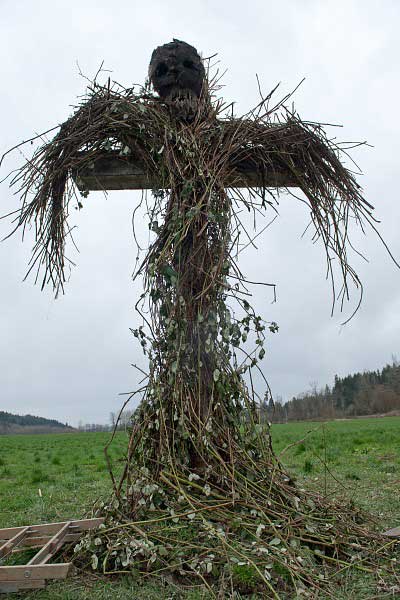 One thing I tend to do while watching movies is think too much, common sense and logic play a big part in if I really enjoy a movie or not, and this one fell short on both of those fronts. The biggest head scratcher to me is that the rhyme says that they have to bury the scarecrow, but he moves through the ground. Some of his more surprising kills come from him moving through the ground and popping up through people. 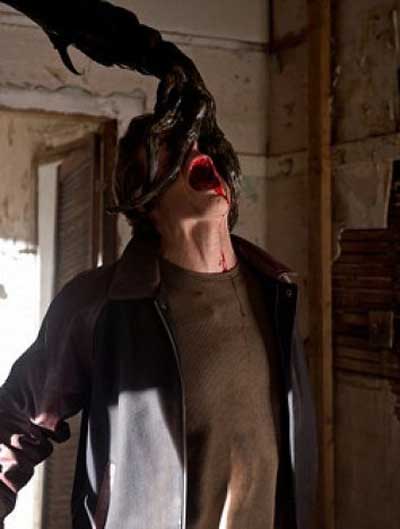 Another plot hole that makes you question the whole movie is in the first ten minutes, the two kids fall through the barn floor, releasing the scarecrow, but it never gives you a clear reason as to how it is released. Is it released do to them breaking through the floor, or because the one cuts her leg open, spilling blood for the scarecrow to eat. 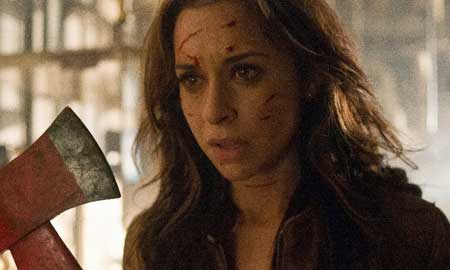 I don’t want to deter anyone who hasn’t seen this movie from seeing it, it was enjoyable, and some of the scenery is nicely done, and the scarecrow can throw a couple of jump scares at you. This is a movie that you just need to sit down and not over think. So if you see it showing on the Syfy channel, check it out, you might be surprised to see yourself getting into it.