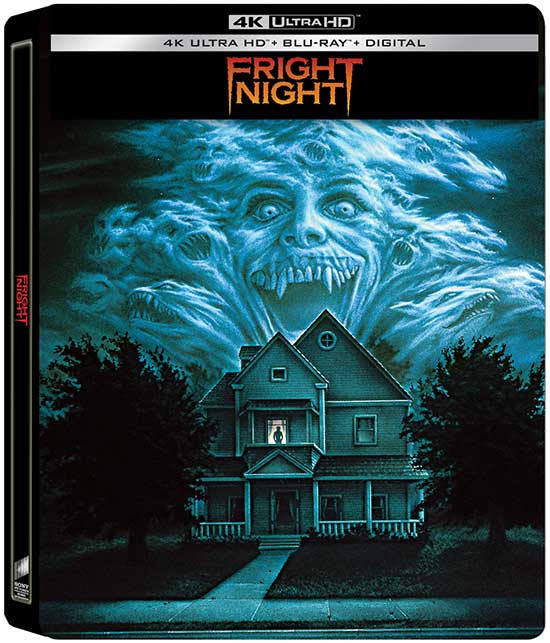 When a teenager learns that his next door neighbour is a vampire, no one will believe him.

This gem of a horror movie came out in 1985 and at the time was a welcome breath of fresh air. Until then, the screen was starting to become dominated by the ever popular splatter genre (in all honesty my personal favorite subgenre of horror). By this point Jason was in full swing, Freddy had just made his debut and most holidays were getting their own horror makeover. The blood was flowing and teenagers everywhere were terrified of being hacked up by the next mask wearing psycho madman. 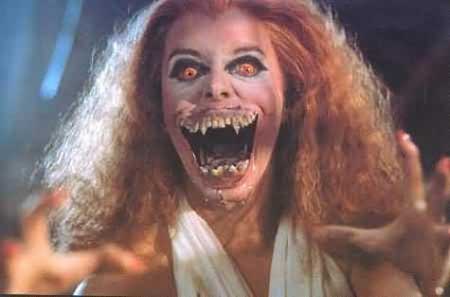 And then came Fright Night. In a way a throwback film. Vampires were not exactly hot material, The Lost Boys was still two years out and although Saturday night horror shows could be found sprinkled here and there on your television they were also trending down. Who would of thought that a movie about a vampire that moves in next door and terrorizes his young neighbor would become not only a hit but a beloved classic for those who not only love eighties horror but horror in general? 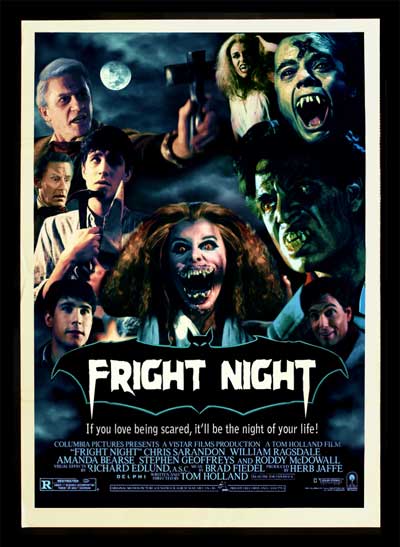 Tom Holland saw something and boy did he ever deliver. He not only wrote the screenplay but directed as well (he also brought us another eighties classic “Child’s Play”). In a way the simpler the plot and idea of a horror film the better. Don’t complicate things. In Fright Night the premise is simple. Teenager Charley Brewster discovers that his new next door neighbor is a vampire who is murdering young women but soon finds himself fighting for his own life and that of his friends when the vampire sets his sights on him. Simple yet effective. 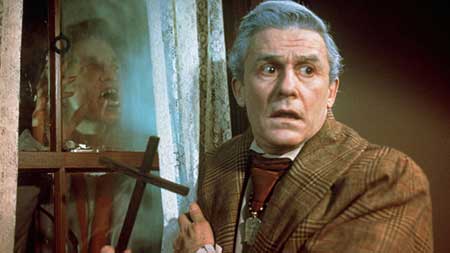 And so goes Fright Night. The aforementioned Charley Brewster is your mostly typical teenager, failing trig, trying to score with his girlfriend Amy, and a dedicated viewer of the horror movie television show hosted by the one and only Peter Vincent, vampire killer. What more could a young man want? If only Jerry Dandridge didn’t move in next door.

You see Jerry (played wonderfully by Chris Sarandon) has a secret. He is a vampire and it doesn’t take long for Charley to find out. If only he didn’t look out his window with a large pair of binoculars he would have never known what Jerry was up to. But never fear, Charley is going to make sure his neighborhood is a vampire free zone. But after failing himself, then failing with the police and finally getting attacked by Jerry, he realizes that his only hope may lie with Peter Vincent (played brilliantly by Roddy McDowall). Can the two of them put an end to an extremely smart and powerful vampire? 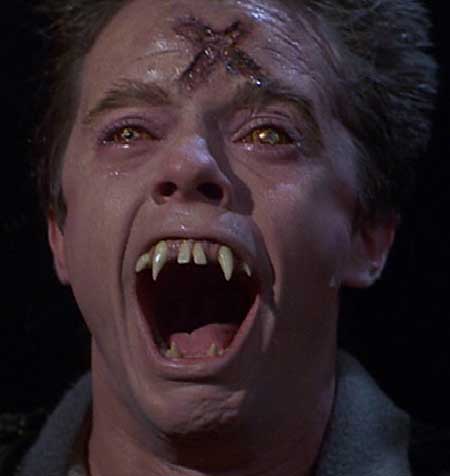 To say Fright Night is a real treat is a bit of an understatement. This was one of the better horror movies to survive the eighties and if you are a horror fan then you would be doing yourself a huge disservice if you’ve never seen this film. It actually holds up pretty well as far as the special effects go and not only has great characters but witty and fun dialogue. 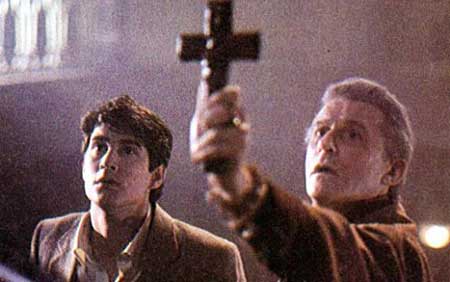 The three leads are all outstanding but credit should also be given to Amanda Bearse as Amy and Stephen Geoffreys as the often imitated but never duplicated “Evil” Ed. Both of their performances add so much to the film. One of my favorite scenes in the movie has Evil Ed giving Charley advice on how to not only ward off a vampire, but also how to fight one if it should attack. 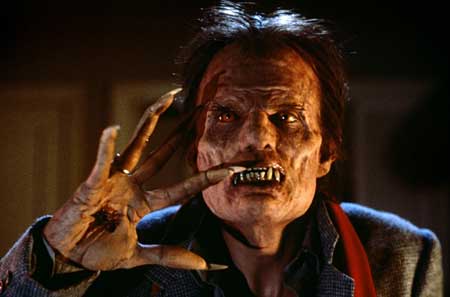 Do yourself a favor and see this if you never have (you poor thing you) or see it again if it has been awhile. This movie is part of my personal collection and I hope that one day you will make it part of yours. Sometimes it can be very trite to say that they just don’t make them like they used to but in the case of Fright Night, that’s definitely the case.