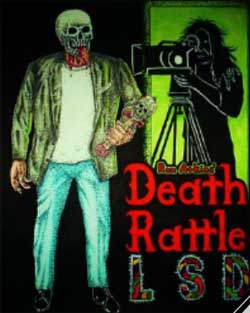 In the blackest corner of a mans mind reality is bent when Lawrence calls upon his friend Ron to help him make a snuff film. As this drug induced murder film begins Lawrence becomes trapped in a hell he can’t get out of. Can this killing be stopped before it’s to late? Or will Lawrence be damned for eternity?

Atkins and team are at it again. This time, they break away from the full throttle nut bag approach to a more Lynchian drug-haze style of film. In a nutshell Lawrence Bucher and Ron Atkins star as themselves, this time taking a more realistic present day scenario and weaving it into a snuff film premise. We find out that Lawrence has just lost his job, been dumped by his girlfriend and screwed out of his final paycheck. This seems to be enough to drive a junkie and “out of money would-be actor” to take extra means. He calls upon Ron to help him make a film using real life snuff presented as fiction within the shell of a movie. As they snort Coke, bitch each other out, and contemplate committing murder, Ron takes the initiative in kidnapping Lawrence’s former employer’s wife. The intention is a full-on rape, murder, and filming to play before his Jewish ex boss. When they finally get to the deed, its a pretty nasty mess. This instance is woven into the next description.

Within the planing and execution of this snuff idea, Lawrence “happens” to sample some of Ron’s drugs that set him on a psychological horror trip. It is this movement when reality becomes blurred with the present often returning Lawrence to his bath room mirror. In his drug induced state his face begins to fall away. The storyline is fragmented with a past and present approach filled in with surreal moments and an annoying bible thumper insertion.

The bible salesmen tends to be a frequent repeater in the premise, though it’s hard to determine his real purpose to the story. I “think” the intention was that he came a calling in Lawrence’s pre-drug haze, and now plays a role as a reoccurring demon of sort. Some of the in between segment visions would suggest his role as a haunting reoccurrence.

The film is actually less extreme than some of Atkins other releases but still manages to throw in one kidnap rape for good measure. The premise can be tend to drag into suggestions that escape the viewer perspective that might be only real apparent to the director himself. But on the whole its definitely a move into the right direction for showing progress in his work. The production is kept handheld, low budget and thrives on simple segues suggesting a harrowing state of madness. It could have raised its bar with some deeper inclusions, but feels right for the kind of production environment it originates out of.

This an other weird notion film creations can be found on the www.cutthroatvideo.com/ site. There is a disclaimer warning which shouldn’t be taken lightly as the collective aims highly in offensive material and shock value. You get the full tour of vulgarities and psycho film asking which simply is not for the mainstream.