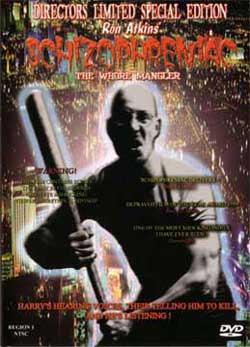 Did you ever wonder how far one movie could go?
Schizophreniac relentlessly explores the world of the extreme with Harry Russo. Harry is an aggravated writer, killer, and drug addict scumbag who will stop at nothing to destroy those who stand between him and insanity…
There are only a few hundred copies left so get yours while you can. Once this version is gone… it’s gone!

Schizophreniac: The Whore Mangler is a film produced under the label of “cuthroatvideo”, primarily though the brain child of controversial underground filmmaker Ron Atkins. If you haven’t seen one of his films then there’s much to be told. The operation runs on a micro budget approach to filmmaking, which is becoming more common these days. Though as a supporter of the independents, we don’t hold that against folks. Just keep in mind micro budget means things were cheaply done with out all the Hollywood glitz.

Now moving on the film. Schizophreniac: The Whore Mangler is actually the first film by his operation I have been exposed to. With a heavy accent on “exposed”. Before you read any further, keep in mind this and all their other films are for adults only with the rating (if there was one) falling close in between an X and NC-17. Sex, violence, gore, foul language and almost everything else you can think of is what makes this film into the product it is. Even there web page has the moniker “cut throat f*cking video” – hardcore and exploitation…so there ya go

Our film squarely focuses on one individual…Harry Russo. Played by actor John Giancaspro. John is as dynamic as they come. Overacting, shock and vulgarity are just a part of his character role. While most may shake there heads and wonder what it is they are watching, the film is very entertaining on several levels. Harry is best described as rude, obnoxious, angry, impatient and vulgar. His character runs around drugged up most of the time entertaining his desires in addition to occasionally stopping by his psychiatrist to let off steam.

Now I could be wrong, but I can’t imagine there was any legitimate script on most of his lines with the number of cuss rants he goes though. So I’m banking on the fact that much was adlibbed. Though it’s still a pretty sick form of humor that would entertain most adult party gatherings. With a title like Schizophreniac: The Whore Mangler, (pronounced hoo-oar in Harrys world) you can guess its not going to be a trip to Disney land. And so our Harry kills, picks up prostitutes, snorts Coke, and defiles as much as he has time for.

To back track a bit, our profile is one of a child abused individual who’s paranoia is only increased by his use of cocaine and stimulants. Paranoid that his girlfriend Drew is unfaithful, paranoid that his psychiatrist Dr Brown is out to get him and jumpy at everything he basically runs across. His recent befriending of a rubber dummy doll he named”rubberneck” is more proof of his insanity.

Classic moments include Harry donning a blond wig, drawing a lipstick pentagram and dancing about in from of mirrors. While the idea falls into “what the f*ck was that” category, it does make you laugh ad the level of actor conviction John has committed to. Other inserts along the way usually involve Harry screaming into the camera in misplaced moments through out the film. My particular favorite that really made me laugh was a quick insert of Harry dancing nude in his getup in a local parking garage, which I could only imagine was a quick…get out and shoot …moment for the actor. This kind of footage is guerilla filmmaking at its best. Hardcore, nutty and …lets see if we can get the shot moments.

As the excursion into madness continues, Harry provides virtually a one man show. Smacking, stabbing, and yelling at anything that gets in his way. There’s the occasional disturbing odd moment that Harry indulges in but i’ll save those for your own surprises. Often his persona comes across almost childlike in his ignorance.

Though when he dons the blond wig lipstick getup you know there’s something going down soon. Watching the footage I’m sure there was a fair amount of blooper reels with trying to keep a straight face through all of it. In one instance as Harry does his best psycho disco strut I couldn’t help but focus on the fact of how did they get the Bee Gees to agree to letting them use “Stayin Alive”? In any case, you have to give the man kudos for agreeing to perform on camera at every whacked out order the director instills upon him.

The big question is.. does this film have a place within viewing circles? I believe it does. If not for “have you checked this one out yet” conversations then as a example why you should go to college and not do drugs example. In all of its depravity it makes fun of itself in every scene of the movie…and that’s not so bad. I’m not so sure I’d call myself a “fan” per se, however I have to say I would probably enjoy watching several more of these and laughing my ass off.

Pick this up at
www.cutthroatvideo.com/