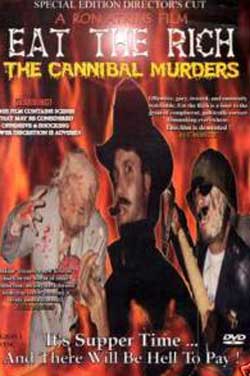 An FBI Agent is sent into the underground sewers of the Nevada desert to arrest a family of cannibals who are preying on the rich. After the Agent disappears, his Boss takes over with the help of the local police. From there on the investigation heads deeper into unknown territory with lots of gore, flesh eating cannibals, zombies and police corruption.

Eat the Rich, is another Ron Atkins creation that his independent operation churned out in 2000. It’s probably appropriate to say that a reviewer shouldn’t start with the newest film and work in reverse as in many times you are going to be disappointed due to earlier efforts not holding up to the future offerings. But that aside, reviews are just that….. to review a film as it’s presented whether past or present.

The cuts and camera usage is still in its infancy which was one of the more apparent reactions. The other was that whether intended or not, the idea and film premise is directly rooted in the Texas Chainsaw Massacre “family scene” act. Not the whole film of Texas Chainsaw, just the dinner scene. This aspect ends up being a majority of the whole film though. The film is centered around the inclusion of really bizarre family characters who jump around, make noise, rape women, eat flesh and continue in a nonsensical way thru most of the film. We even get a weird inbred birthing thrown at us. 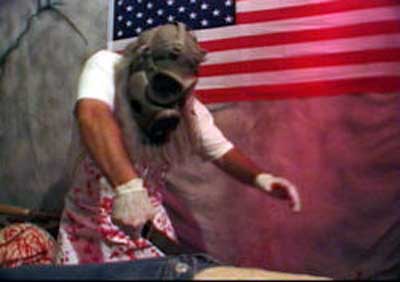 These characters include Mr. X / The Chief (Perry Todd), General Scuzzi (Garvin Lee) and Clint / Lt. Andrews (Terry King). Now if I tend to get a few characters mixed up I apologize as that factor got lost a bit after viewing. What is a bonus or odd addition for that matter is that the lead character “Clint” takes a blatant attempt at a Clint Eastwood persona. Voice and all, his character stays rooted as a cowboy-outfitted madman who leads the group thru their debauchery. The premise of this film is really based on the idea that a family of cannibals are kidnapping women, eating them and leaving the body parts behind. If you got that, you’ve got the gist here. As I could make out, Lt. Andrews  becomes Clint who infiltrates the group and becomes way too accustomed to the family and its habits. The rest of the FBI continues to plan on infiltration and further attempts to invade the lair and bring down the family. The location is set in an odd deserted bunker of sorts seeming to be located in some kind of desert setting. 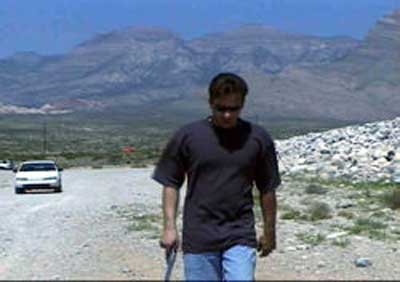 “Eat the Rich” tends to suffer from too much of 1 thing and not enough of the other. Really that being said, it just doesnt go anywhere. The script seemed to be mostly adlibbed in major portions which consist of a bunch of actors freaking out and carrying on like lunatics. My guess here is that the idea became the central core that just didn’t have the locations and strength to really flesh out the ideas much more that a simple premise. The Atkins group still gets points in its early attempts at filmmaking on this one and its great to see that they have went on to different focuses while expanding their filmmaking efforts (in later years) 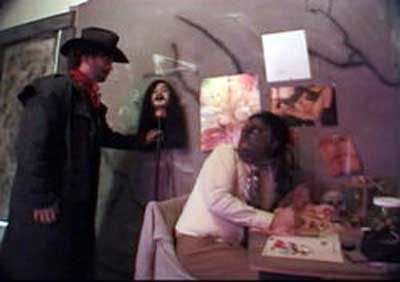 Viewers will want this as an early effort approach to complete their sets but it still doesn’t hold up to other releases from the team. If you enjoy really weird adlibbs and lunatic style arrangements, then have at it. Though for me, my money is more on the Schizophreniac releases and newer offerings.