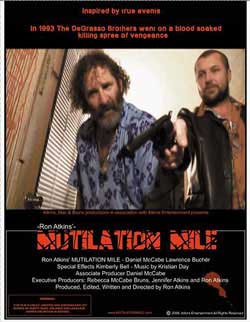 Inspired by true events that took place sometime in 1993, Jimmy & Jack DeGrasso, two brothers, went on a blood soaked killing spree of vengeance. Fueled by revenge & cocaine they slaughtered street thugs, hookers, addicts, and drug dealers to find the murderer of their uncle Sal. Gritty, controversial, violent, disturbing and graphic, “Mutilation Mile” is a throwback to the great exploitation/crime films of the 70’s, and promises to deliver the goods like never before.

Mutilation Mile is a new feature under the Atkins Entertainment umbrella that as we are told is based on a true story. We often see this sort of call out in films, but it’s the reality that guys or characters like this, for that matter actually exist within our society that I found most frightful of all. The premise is set pretty simple. 2 rough-around-the edges brothers named Jimmy (Daniel McCabe) and Jack Degrasso (Lawrence Bucher) are into some pretty hardcore aspects of living. Jimmy is the nutty one who is coked up in just about every shot of the film. His temper and violet streak is often seasoned with a slight dark comedic feel that makes him one of “those” on the edge persona types. His brother Jack is less about the comedic flair and more about anger and revenge combined with a short tempter. The 2 make an interesting pair indeed. The kind you really don’t want to know. As we open upon Jimmy staggering thru the desert I was reminded of influences such as El Topo. Not that every desert scene is influenced by Jodorowsky though perhaps in this case a slight nod.

As we move forward it is important to point out that while there are some real qualities I like about this film, the content is of the extreme nature and is definitely not meant for the masses. The usage of extreme is actually becoming something of a frequent these days as filmmakers take of real subjects about real cases. I believe Ron’s intention was not JUST to make another extreme film but to tell a dark story about the 2 brothers whom the film is based on. As the Degrasso actors go about their roles, we actually believe the characters and the
self indulgent style that makes them seem invincible at least within their royally screwed up world. We cant help but wonder how much the actors themselves resemble the personas of their characters.

Right from the getgo we watch as a much older lady is brutally raped by her old man and his friends. Though I didn’t catch if the lady was a prostitute or just an onsite play toy for a local biker bunker. In any case this sets the stage for extremes which are introduced in key moments but not to the overkill of many modern horror productions. We get shock, but it’s not crammed down our throats either. What is, however…. and what I’m guessing was necessary to really sell the “always on go” personalities of the 2 brother was their passion for dropping f-bombs in almost every phrase spoken. So much that it is easily comparable to a valley girl who can’t speak without saying the word “like” in every phrase,. In that sense it’s slightly satirical as part of the characters normal way of speaking.

Sal is their Uncle, and somewhat of a crimelord himself. Though when Sal gets knocked off and slit ear to ear, his edgy nephews, the 2 brothers Degrasso take one of his statements to heart. That statement being “kill everybody”

The reality of Sal being murdered and his last dying wishes are just enough for these extremist to shoot, kill and torture everything in their path. In fact, alot for the kills are just indulgent without real purpose but to these 2 over the edge drugged up killers, it becomes literally a part of the MO for the films progress. The story takes us on their chaotic journey and surreal existence that takes to heart the order” kill everybody” with full conviction. What this means to viewers is that some of those moments are hard to watch and done without visceral forgiveness.

Mutilation Mile is Ron Atkins most cinematic and well shot to date. The maturity in editing , sound scoring and cinematography is evident right off the cuff. In fact often in scoring if the sound score works in conjunction with the footage but doesn’t distract, this is usually a good sign that the score is doing its intended purpose and moving the film rather than sitting on top just for icing sake.

For an “extreme film” this production looks good.I’m guessing this round was shot in HD as the footage has a stark quality that surpasses some of his earlier features.

MM fits nicely into a category of extreme crime and extreme violence like a welcoming cousin. Probably more attuned to sit closer to on-your-shelf films like “Serbian film”, “Kalifornia” and “I stand alone” than say “Saw” or “Hostel”. The film doesn’t need subtitles, but it might be a recommended option for viewers who feel weird about 90 minutes of intense screaming bellowing out and disturbing your neighbors.

Somewhere in this anger and edginess is a thin veil of dark comedic overtones and sarcasm that might actually put a smile on your face at times. However be warned…..this is not your recommended date night movie, stick with “Notebook” for that.