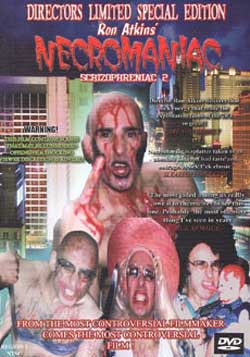 “Necromaniac” is the audacious second installment of the Harry Russo Story. Continuing where “Schizophreniac” left off, Harry takes you on a rusty rollercoaster ride through dank sewers of an insane man’s hell. Expect everything and be ready for anything. Harry Russo is back, and he and his pal Rubberneck will mutilate, screw, chop, snort and defecate on anything that moves! Forget what you think you know about serial killers.

The world of cinema has definitely found new homes in the hands of rogue filmmakers. Though the question I have to ask myself all the times is was it better in the days when film making wasn’t so accessible. At least it helped to weed out the serious from the reckless. One such film that I had a feeling of what I was getting into long before I push play stems from that form of thinking. Though underneath the reckless are some good notions as well. The film I decided to invest at least the length of the film time in is called Necromaniac Schizophreniac 2. Which is a followup to their former release “Necromaniac”. The project is helmed primarily by Ron Atkins who appears quite often in the credits with a handul of others to lessen the load.

Some markets rely purely on shock, disgust and over the top. I’ve seen it work best in Asian films, but less in the US circle. Ron definetly has drive, but is the material adequte to call a “release”? Well as I try and fit the pieces together I’ll let you be the judge.

Our story is centered around a dynamically over the top actor John Giancaspro who plays the role of Harry Russo. To quickly bring ya up to speed, Harry was beaten and molested by his parents at an early age, murdered his parents at 16 and sent to prison for 9 years in Clark county. After which by age 25 he was released but suffered depression only cured by a doll called rubberneck given to him by his girlfriend Drew. He murdered her and went on a killing spree. Simple enough, we get it…the dude is jacked up.

Before we really get into the storyline, the character of Harry is one in himself. While it would be a stretch to say he deserves an Academy award for his contribution. He definitely deserves something for the level of high enery he brings to the screen….maybe a kick in the mouth? – just kidding, of course. John has talent even if its the simple talent of yelling at the screen 24/7. I would guess that he wouldnt have a voice left after the shoot. But like I said, I would guess.

Our film pulls you in with 3 minutes of one hot well proportioned lady taking a shower and erotically soaping up her goods. then for 2 minutes more she proceeds to lather herself with skin lotion. So we get 5 minutes of this until Russo dressed as an old lady comes in to kill and rape her. This of course is our heaven and hell moment.

After that we spend some oddly misplaced time with Russo freaking out, yelling, citing blasphemy, and a variety of frenzied cuts. Overacting is an easy call on this one. On the plus side, you can tell that Ron was inspired by many of the early exploitative films with some slight nods to Takashi Miike and Alejandro Jodorowsky. Though only enough to get inspired from but not enough to be compared to.

Harry is a nut job. If you can grab your hands around that concept you’ll do just fine. For all the female nudity we get in this picture, we probably get even more of Harry’s junk flipped in our faces, which is usually my que to leave my body and tally up my chores left for the day.

I really couldn’t think of this film as anything more than a comedy with hardcore violence. Russo is so over the top that anything else wouldn’t stand up. One particular scene which I actually heard a story on was the scene of Mrs. Parker getting corpse humped in the kitchen. First thought…..how did they get her to sign off on this scene? Though in reality I found that they actually filmed her and replaced the corpse humping with mannequin … doncha love editing! Fact or fiction ……..only the shadow knows.

What else do you have to look forward to? Well Christians need to turn away and never look back as Harry bitches out God and lays down some heavy blasphemy. Though I can tell ya , Jesus kicks his ass…which is a nice turn of events.

Complaints? The DVD itself lacked any chapter forwards, which means if you want to get to a section you have to fast forward thru the whole film. One of my “how could they” pet peeves that I hope gets fixed.

Whatever the case, as a reviewer I feel responsible to point out the obviuous. Which is these films are for hardcore fans and not for family popcorn night. The yelling alone would prompt you to listen to it in a padded environment so the neighbors don’t think you’ve lost your mind.

Strangely as I began down the Atkins path, the shock switch turned off and the “this is hella funny” switch turned on. Not to say it’s art, but rather a perspective of how to shoot a film and deliver it on a low budget. I can tell ya I’ve seen enough zombie films, that I’m bored to death with them. In the least, Ron serves up something wacky and bizarre. Though take away John’s performance and I’m not sure what’s left over. Looking for something weird, wacky and different? Then Cut throat Video is your guys. Stay tune for more reviews on their stuff as now my curiosity is peaked.