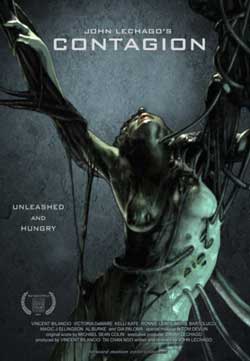 Seven misfits are trapped by a flesh eating slime creature. And no TV!

“Contagion” is a film that I’m happy that I have a screener copy of because I had to watch it twice before being able to write a review for it. Mostly because I enjoyed it so much, the hard part for me in writing the review is the entire film is just a whole lot of “bad fun.” It’s a happy fusion of a slimy H.R. Geiger esq monsters, digital sexploitation and people trapped in a room with no alcohol, TV or radio, while a biological disaster keeps knocking at the door trying to get in… 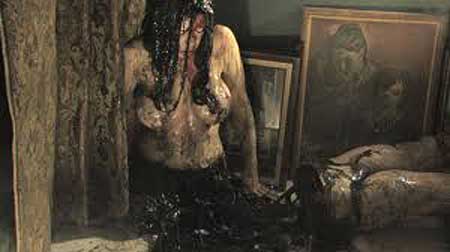 The film starts off as a back alley biological weapons deal gone wrong and the briefcase with the “stuff” in it winds up in the possession of an alcoholic artist whose apartment is right next to a p*rn set. As curiosity may have killed the cat in this case it lets loose a sentient kind of slime creature that takes over the consciousness and bodies of all those that it comes in contact with. 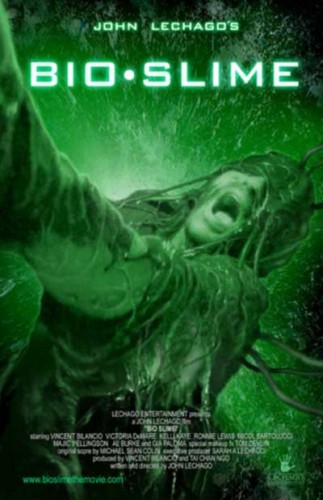 After the slime gets loose the main characters are stuck in a room with no way out “Night of the Living Dead” style. Victoria De Mare, Vinnie Bilancio both give killer performances. Victoria De Mare really is a whole lot of entertaining as the annoyed yet wanting to get down to business p*rn start –but in the most business kind of way. Seriously she’s got one of the best “eat me” lines ever, in a monster eating kind of way. Vinnie Bilancio gives great little a slice of life of what it looks like when Tommy Lee wakes up as the alcoholic painter who’s bombed his last show. 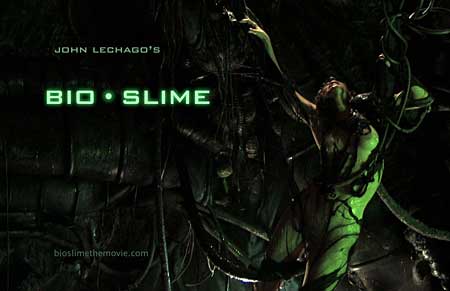 There is a ton of slime in “Contagion” which I have to say is really appropriate being it is a slippery film to review. For what was obviously a low-budget film the cast and crew seem to have been able to push every dollar as far as it can go in the special effects department. But really the effects are kind of a side note, this is just a movie to enjoy.

In a time when independent horror films seemed to be overly leaning on zombies and vampires “Contagion” is a best of amalgamation of “Alien,” “The Thing,” and “The Blob” while being both new yet citing its source material. With a lot of nice “throw backs” it avoids being unoriginal, by throw back I mean remember when horror films had excessive nudity? “Contagion” justifies it with the main character living next to a p*rn set. If you’ve ever been around the “talent” in the p*rn industry they’re usually willing to take their clothes off at the hint of the word “naked…” I don’t write this to be caustic but case in point: former p*rn star Gia Palermo is in the film with a pretty decent sized part and gets naked. She also gives a decent performance, so I have to give her credit at the new line of work.

More than anything “Contagion” is fun, I don’t mean that to say its “funny” it does have it’s humorous moments, but it’s just a “fun” horror film to watch. The easiest way to describe “Contagion” is imagine you’re going on a date with a girl whose drop dead gorgeous, and likes to tell dirty jokes… but absolutely refuses to talk about religion, sex or politics… in the best way possible. It is sexy, slimy, fun… Aside from making a good film premise it also makes for a good date too.