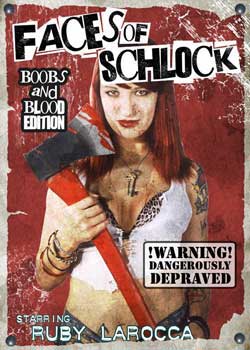 Four tales of terror: “Blood Witch”: A twisted Goth girl summons a murderous seventeenth century witch to exact gory revenge on anyone who crosses her path. “Mike Wuz Here”: Night shift workers at an old movie theater are terrorized by the ghost of a former employee who committed suicide in the building. “One Foot In The Grave”: When a beautiful young dancer loses one of her feet due to malpractice, she uses black magic to bring the severed appendage back to life. “Slay Ride”: Left behind by her family on Christmas eve, a teenage delinquent punk chick quickly becomes surrounded by murder and mayhem.

As if you couldn’t tell by the ginormous credit listings above, it’s anthology time again, folks. Put together in the lowest form of budgeting possible by a bunch of horror fans/filmmakers in the TALES FROM THE CRYPT tradition, we’re told four tales of terror that are each introduced in true Elvira-inspired from by the gorgeous and busty Slutpira. And in true anthology-reviewing tradition, let’s get right to the meat of things and I’ll tell you all about them, in order, even, as we go…cool? Hope so, ‘cause that’s how I roll…

We’ve seen it all done before, but the perv of an exterminator (“Bug Man?”) and a cool and funny yet still ironic ending redeem it for me and wound up making it quite enjoyable for me and sets the tone of the rest of the flick pretty well…great choice for an opener. 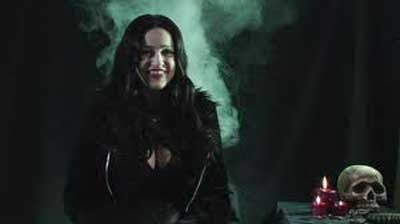 MIKE WUZ HERE: An employee committed suicide in the basement of a movie theater, and the other employees want his annoying ghostly ass the hell out of there. But since said ghost is a paid employee of the theater, he will not under any circumstances be discriminated against. So what’s a pissed off ghost with an anti-dead discrimination chip on his shoulder to do? Well, when push comes to shove and he’s ready to kick all kinds of humanly ass, he possesses one of the living and goes on a murder spree, of course.

This was a very cool premise to me and I know I would have enjoyed it more if the filmmakers had done things just a little differently – it was way too talky-talky and worst of all, equal rights preachy for me to truly enjoy it the way I should have. Call me drunk (and you’d be right), but this was my least favorite of the bunch.

ONE FOOT IN THE GRAVE: This one is more f*cked up than a soup sammich, and I love it for that – a dancer with a foot injury gets her cast removed to find a nasty looking limb that would make even the most devoted foot-fetishist say “DAAAAAMN!!!!” Her podiatrist must amputate or the infection will spread and she will be no more…good thing he has a hacksaw and a witch (??) handy to take the foot for her own purposes. But lo and behold, the foot has other plans…yeah, that’s right – the foot goes on a killing spree…just because it can.

Easily my favorite, just because it’s very well done, very f*cked up, and I have good friends that are foot fetishists, and good friends (including my muse) that would rather have their beautiful soft breasts ran through a meat grinder and fed to South American cannibals on a bun with mayo and grilled onions than to have their feet touched, which makes this story even more f*cked up and hilarious to me. 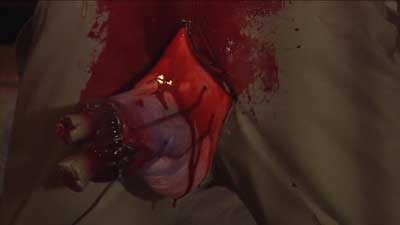 SLAY RIDE: Yet another gothic wannabe brat gets grounded at Christmas and her parents decide to teach her a lesson by going on vacation without her. WHAT??? Parents of the f*cking year there. Anyway, she gets stuck with her school science partner and a redneck ruh-tard who would rather chop chicks up with an axe than ask them out. But then, Santa shows up and shows those insolent f*cks what he really does with those who make it onto his naughty list….oh hells yeah!!

LAST WORDS:
A true exercise in no-budget filmmaking, this could very well scare a lot of people away. My advice – don’t let that happen to you!! Easily one of the best anthologies to come out in 2010, simply just by passion and determination alone on the part of the filmmakers and actors. Plus, they weren’t just thinking of clever marketing when they named it the BOOBS & BLOOD EDITION – it lives up to its name in spades. Plus, there’s some real humor here that’s not only hilarious, but also pertinent to our times, hilarious, and satirical. And no one I know loves satire more than me, other than the Zucker Brothers. Fans of indie horror as well as and/or anthologies – this is well worth having in your collection!! 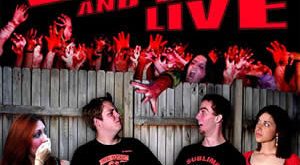