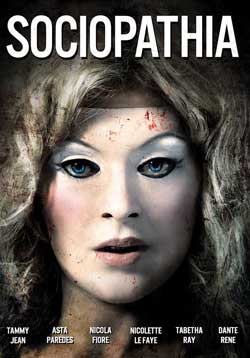 A special effects and makeup artist for film productions has a deep dark secret that she struggles to conceal. The real work begins after hours when she murders her lovers to preserve each as her own cadaverous playthings.

The lead role of Mara played by Tammy Jean seems custom made and the casting department struck gold by securing this highly gifted actress. Forever pleasing unto the eye, her vast myriad of emotions reels in the audience with ease and refuses to relent until the final credits. A tremendous sense of unease is unleashed before an unsuspecting viewership making Sociopathia infectious through and through. 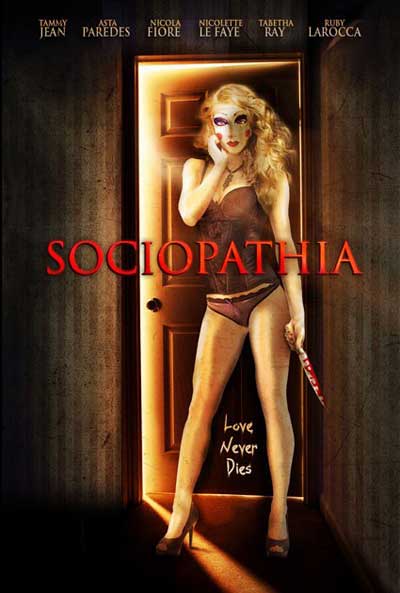 Special kudos to the editing department for utilizing a fine blend of variety. The right sense of foreboding is harnessed effectively through an orchestra, piano soundtrack. When the aggression is dialed up a notch the viewer is raptured in audio prison with an accentuated techno and thrash metal accompaniment that gets the pulse pounding and subconsciously makes us beg for more. Sociopathia beckons our most latent fears and exploits them effectively making the slumber hour much later than one may suspect.

One may get the impression the production is of independent caliber and possibly shot on a shoe string. The cinematography however is crisp, clear and embodies a perfect contrast of light and shadow. As a result we question not the authenticity of the tale. Although the script seems to be of a far-fetched nature as the body count rises we’re privy to just how completely unhinged Mara becomes as her grip on reality is forever descending into an abyss of madness. Plenty of metaphor is captured effectively as we empathize with the lead character’s struggle with mental unbalance. Her struggle is depicted in true disturbing fashion in the form of hallucinations. She has a conscience but grapples constantly with her need for blood.

Mara’s overall prowess is eerie and bone-chilling. It’s the sort of acting that makes us look twice at other people in our waking reality. We second guess asking out the quirky girl with an appealing smile. We wonder if we should keep to ourselves rather than run the risk of unsettling a loose cannon. Sociopathia is the sort of film that embeds deeply into the subconscious long after the final credits and makes for a formidable conversational piece. Our fears and coerced into everyday recognition. Director Ruby Larocca should take great pride in unleashing such cinematic grandeur.

For the most part the acting is above subpar for the secondary characters. Some of the scenes are delivered a little shaky and the execution as a result is somewhat contrived. Some of the dates Mara interacts with are so ridiculous we find ourselves in position of cheering on the anti-protagonist and can’t wait for her latest victim to get theirs. The kill scenes are generally creative and not so over the top we don’t question the plausibility factors.

A couple of plot holes are observed which happens on virtually every film set. It doesn’t take a keen eye to wonder how Mara gets away with displaying rotting corpses on her living room sofa with the drapes wide open in her semi-detached, suburbia locale. Someone such as a mailman, neighbor or passerby of any sort surely would have noted something awry and acted accordingly. The faux pas somewhat tarnishes the plot movement but we just as quickly forgive the oversight and move on. Another would be victim named Vera is picked up on the road side and states she could use a ride as she’s ‘far’ from home. Mara manages to get her there in less than two minutes, which driving or not seems a little contradictory. Vera is such an imbecile we can’t wait for her inevitable demise. 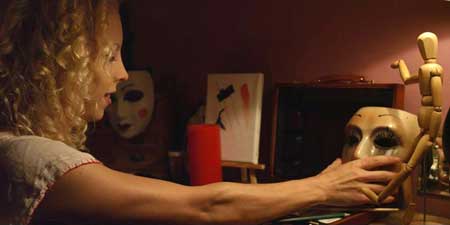 Easily the most stand out feature of Sociopathia is the plot escalation and how the correlation of Mara’s disturbing behavior is unleashed. This film reminds me of a female version of American Psycho (not to be confused with the schlock starring Mila Kunis in the sequel). I predict sensational things for young thespian Tammy Jean and urge any horror fan to keep a close eye on this up and comer.

The special effects were a little disappointing. Although the gore factor is highlighted without debate. One cannot deny that more special attention could have been used to detail to breathe more realism into the money shots.