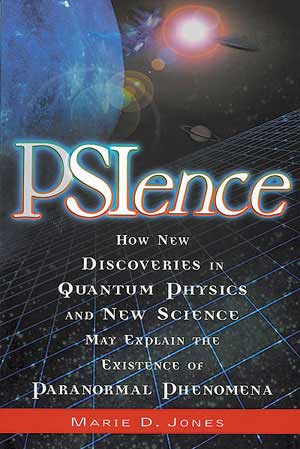 PSIENCE: HOW NEW DISCOVERIES IN QUANTUM PHYSICS AND NEW SCIENCE MAY EXPLAIN THE EXISTENCE OF PARANORMAL PHENOMENA (PAPERBACK)

A fascinating book indeed. Marie D. Jones has authored many books. A few of which we’ll be reviewing on horrornews.net. She is no fluke as these researches and discoveries are her life-work only motivated by a desire to seek out more information as she hunts for secrets behind the truth of things. This book in particular is both wonderful and scary. It’s wonder is it’s multitude of subjects covered that deal with paranormal phenomena, the scary part are the questions that are asked based on the research she has done. To simplify matters each chapter leads us to something new. We are given brief overviews on alot of stuff. To get you in the mood, she gives brief but comprehensive summarized overviews of UFO’s, The Bermuda triangle, spectral apparitions, poltergeists, energy vortex’s, mind over matter and even zones throughout the world that exhibit high levels of strange reports and phenomena that go against laws and physics. All this overview is of course leading you up to something. In other words you need to know where you are going before you can get there.

I must say, I have gained many new perspectives. Not only from suggested reading but from her studies on reports of famous noted scientists and their results. Such ideas like the mind and brain being 2 separate entities. The wonder of supernatural events that perhaps they may be originated not from the outside forces but the participants themselves, going more into detail on hormonal teenagers and a possible connection. Portals in the world where time and space are challenged. Portions of the brain that exceed mere reality based abilities. The idea that legends and myths and even ufo sighting might stem form a passage of multi verses or parallel dimensions. In other words, that flying saucer that appeared and disappeared may not be just a technical issue of speed but an actual wormhole reality. Misplaced creatures such as the loch ness or big foot that may be time displaced for some unknown reason. I that doesn’t get you then lets talk about the Akashic Records that supposedly had recording of all living things..its history , its emotions, its thoughts and intents. Yes alot to swallow for anyone. But this is the is interest , passion and journey that Marie has chosen to tap into to. Let’s talk about deja vu, and a potential of it being a parallel universe slip that occurs in moments for everyone.

I won’t lead you astray, this book gets into deep subject matter that will make your head spin. Some sections are easy to swallow, others such as Quantum physics (even in its simple form) might require a few reads. This is due to this subject matter is above everything you’ve ever known. Let’s talk about parallel universes and string theories. How about the new discoveries about the big bang, M-theories, holographic universes or comparisons to, the idea of being able to go faster than light which results in breaking the time barrier? Oh ya, everything you knew about the supernatural pales in comparison to the unraveling of the universe. How about other civilizations existing along side us in multiple universes and unseeable due to different planes of existence? Sound like fun, let’s get into “zero Point energy” or maybe “time storms” or the theory of worm holes. We are just touching the tip of the iceberg here…there’s alot of ground to cover. Marie takes you into these subjects with care though. She knows we aren’t all physics majors, or scientists or even paranormalists the message at the end of the day is its all related and most is too much for a mind to conceive. So let this book be an introduction into further more intense studies…some of which she has authored herself.

How can this be in relation to horror? Well anything unknown is certainly scary and beyond comprehension. Are we really ready for the truths and what mental issues of disappear, stress, anxiety and fear will those answers bring? The truth can be as horrific as anything because its beyond our level of comfort. Psience is that journey. A combination of parapsychology and science to determine realities to questionable subjects. I not only recommend this book but I’m a fan now! Look for more coverage of other Jones books coming soon!! 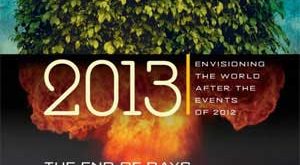