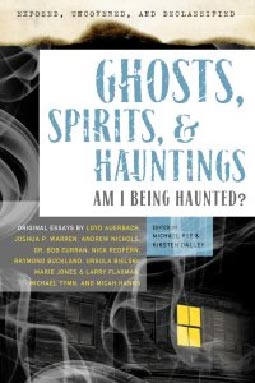 Exposed, Uncovered & Declassified: Ghosts, Spirits, & Hauntings: Am I Being Haunted?

From the paranormal specialists at New Page arrives another book chock full of interesting tidbits about ghosts, entities and strange beings. This edition actually features the works of several authors, all experts in their own right. The purpose stems from a interest in not only clarifying ghosts and spectrals, but pointing out that not “all is as it seems”. Each chapter takes on its own approach to the matter. This approach notes particularly eerie evidence of apparitions who appear in photos for no reason. It also presents evidence of those who appear on video tape in forms that would suggest existence eons ago and the appearance of creatures in urban legends that we have spent countless tv programs and books investigating.

Most interesting is the approach at not taking each facet of spiritual activity at face value. We are introduced to different kinds of spiritual classifications that account for a number of explained and unexplained related circumstances. We visit the idea of quantum physics and raw energy which is actually a who study on its own. As we grow close to this new age which unfolds before our eyes, scientist continue to make breakthroughs and validate things that weren’t possible. For instance in one chapter a break thru in 2010 announces the confirmation of a smaller than hair object that is seen as moving and unmoving at the same time. Surely this opens up the arena to the other ideas we’ve speculated on. Reading discusses raw energy, life that goes on and even our own abilities to merely think while our bodies respond in an almost eerie fashion. How about those reports of Lochness, Bigfoot and werewolves? Those glowing eyes, those monstrous appearances? Redfern states that perhaps these appearances are more of the spiritual nature or dimensional for that matter. Perhaps we are seeing residue from ages ago that appear and disappear. To validate this, he asks…where is the evidence of feeding?

This ghost-focused book really takes the time to point out that science may be “more” a part of the explanation than the explanations themselves. Providing some of these notions are reports on past ghost stories which the author points out coincide with things like personal debt or community troubles.This might suggest a reason to ad lib a bit to protect other matters of interest.

Poltergeist, entities, black dogs, phantoms, apparitions…..shall I go on. Each has their distinct purpose of definition. Though while some (and many for that matter) can be readily explained away, there are those that aren’t. This subject has grown with a new audience who enjoy seeing ghost hunters investigate week to week. With a few turns of the channels we have other shows talking about time travel, multi dimensions and bends in space time. Books such as these help bridge that gap between the 2 fields. Those which are supernatural and those which are extreme science. This energy, this magnetic field and all its associations are coming closer with each new discovery. Books such as these fuel that spirit into new thought.

“Exposed, Uncovered, and Declassified: Ghosts, Spirits, & Hauntings – Am I Being Haunted?” arrives as entry in a series of books that New Page has issued delving into different areas of metaphysical interest. This particular read is promoted as “essays by paranormalists on the subject of ghost, haunting and spirits”. Make sure to check out their follow up release focusing on UFOS and Aliens.