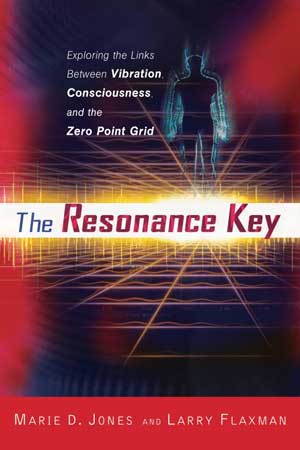 As we dig deeper into the collected universe of science versus fiction, we uncover several other means to an end. Such ideas and concepts form upon others and blossom into studies of a particular focus or another. The focus of the book “Resonance Key” takes a different hard look at something more familiar to us ….sound. More particularly than just sound but the frequencies themselves. Author Marie D. Jones and Larry Flaxman have done there best to put into words a subject matter that in itself is a challenge. Questions and concerns are asked about the nature of frequencies and its power. The power that transcends our existence perhaps and falls into other planes. A power that can cause earthquakes, can build pyramids (perhaps) and can rupture solids at a molecular level. What about the idea of something even more profound in quantum physics, time manipulation and even as a mass destruction weapon using only sound frequencies? What did Tesla discover that was hushed up and silenced. What is even more of interest is did he discover a true way to present free energy that was met with disapproval by JP Morgan to keep us paying for it and the fat cats pockets full?

This book comes at you with alot of scientific agenda and some more theoretical. The best way I found to tackle it was in pieces so that some of it could sink in a little better. Though anything that takes hard look at our way of life and what we are perhaps ignorant to is of interest to me. Alot of subject mater is covered as well that far exceeds simple rational thinking. While resonance is the key, the book is able to take it into directions that question the existence of life itself.

On particular chapter deals with frequency experimentation and the effects to has at different frequency levels. Implementing cycles per second called (Hz) can summon ranges that include neurological interference, organ rupture, death, choking, visual acuity, headaches, and skin flushing just to name a few. Take it further into a lower range and perhaps you’ve reached what they are referring to as the metaphysical frequency. Ideas and relationship are discussed and the potential influence that these frequencies may have on Ghost Hunters or enthusiasts.

Tesla is further mentioned in who now is perceived as a genius with his pulse on the some pretty important technology. The term “Death Ray” is explained and the potential for resonance to be used in cases of mood management. Of course the laws that be prevent such experimentation or do they? Government agencies such as HAARP were created for just this intention to name a few. This study surpasses just targeting angry co workers and implies all sort of uses that I’m guessing is still very much in research. Is the future of warfare as simple as emitting a sound frequency for use of destruction, mind control or warfare that surpasses the need for actual fire power?

Other chapters look into the ancients and their use of acoustics and chambers that were built to harness energies base on this technology. Musical instruments that produce healing tones and nurturing sounds for specific uses in medicine.

My favorite though has to go to the chapter on the reality machine. Scientists suggest that our brain lacks the storage capacity to hold the grandeur of all that is needed to perceive some of the more advanced progressions that we are destined for. A study of brain versus mind and consciousness also alludes to the big picture and our small part as human beings. Studies of individuals who have lost temporary use of sides of there brain report on a higher stated awareness into the realm of spiritual alignment and sectors that enhance states of being that surpass our general reality. What keys does this notion hold and what does this experience suggest about our relationship with the cosmos?

The authors have combined forces and presented a really great book that should be investigated further by folks in the field who indulge in all things “out there”. The idea may not sound as glorious as ghost chasing reads or after life analysis but I believe now that perhaps this book addresses the cosmic forces that unify our fabric of reality . I also believe that there is something here that demands closer investigation for the future of our progress. Wonderfully collective theories and suggestions that make this edition a must have!