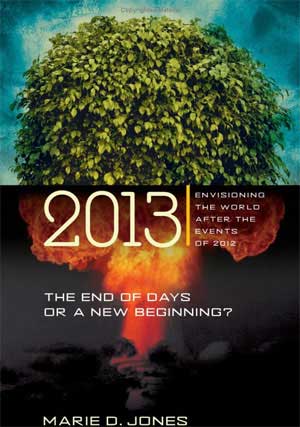 “A book that might very well scare the living piss out of you!”

Perhaps the greatest horror/mystery/fear of all – the coming of the year 2012. For those who have been in the dark. This book will definitely get you up to speed. Written by the multi talented author Marie D. jones, we have her latest book titled “2013: The End of Days or a New Beginning: Envisioning the World After the Events of 2012”. New Page Books have never been at a loss for long title names! 2013 suggests the aftermath that “may” occur after the dreaded 2012 Dec 21date.

Julie “again” has done her homework. The amount of 2012 hearsay and past legend writing will make your brain do flips as she takes you into this upcoming phenomena. 2012 as she states is the date according to “most” of the prophecies and that the world is due for a major change. Maybe this is the end of the world or maybe its a entire transformation all together. Really y no one truly knows as it hasn’t occurred. But like the anticipation of Y2K this one is actually backed by not only myths, scholars and historians but by the perhaps smartest culture the world has ever known, the Mayans. Her research takes us through where these calculations and foretelling’s originated from and how they all arrived at this particular doomsday date. Which if you haven’t noticed is 3 years away! Although her facts do include other prophecies and telling’s that placed the date at a different time date, it is argued that the majority have precisely dated Dec 21 2012 as the dominate force. So for the sake of clarification the book is written with this particular date in mind.

The calculations aren’t just assumed for reader sake, they are explained as to how the scholars arrived at these. While this info will surely go over the heads of nonmathematical individuals, it is good to reference and know. It is also good to know how this legendary Mayan calendar was set up.

How many ways could we extinguish our race and species? Is it a revelation coming forth? Is it a biblical prophecy that christians have spoken of for ages or the ultimate truth the Mayans have warned us about? Are we in the age of ultimate change, and has time sped up? Will we be our own undoing or will it be the results of a cosmic extinction we have little control over? These are just a few of what is covered and asked. In fact more than I could cover in one book review.

The unfortunate truth is this may be one of the more important books you need to read in the next few years, if not now. The future is coming and it looks like most of it is bad. Julie helps us take a look at and analyze what this all means. Is there truth to the “Bible Code”? What does Global Warning really mean and what is already happening? It seems like it would simpler if so many issues weren’t all facing us at once. A portion goes over the power of intention, human consciousness and energy enlightenment levels, which I think is hogwash though good to know a little about. More intriguing are “now” situations as the increase of major storms, water shortage, the effects of heating up and cooling down, methane issues, seas changes and economy crisis. It doesn’t look good folks! Pick one or pick them all….you be the judge!

Read about the issues with icecaps melting and the danger of the Amazon rain forests becoming extinct which could cause all sorts of problems for us. How about those 2 asteroids on there way to us, both either damaging or cause for planet extinction! Cosmic storms anyone? Could those sunspots deliver radiation, climate changes or worst………. Geesh and I thought the cancellation of a few of my favorite TV shows was stressing. The simple fact is, you can’t ignore what’s coming. Life will change in one way or the other…get educated now so your not left in the wake

I’ve read a few of Julie books and have no complaints. She is definitely knowledge in what she writes about and explains it the best way possible in common language. Will the data loose you at times? For certain, though that’s due to it being pretty technical and historical based material. Though without it the rest wouldn’t hold up. So you get a bit of both worlds. That which you can consume now and that which you can consume a bit later. An important book to own! Take it in chunks, so you don’t miss the important details