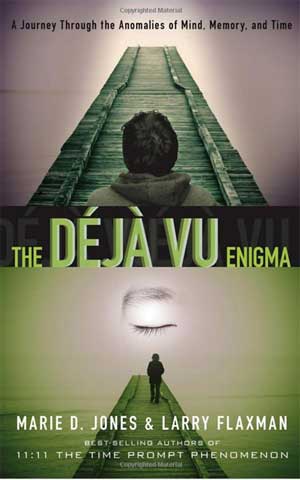 THE DÉJÀ VU ENIGMA: A JOURNEY THROUGH THE ANOMALIES OF MIND, MEMORY AND TIME [PAPERBACK)

From the dynamic team of Marie D. Jones & Larry Flaxman who have brought us some many wonderful books on fringe subject matter, arrives their latest project titled: “The Deja vu enigma: A Journey Through the anomalies of mind, Memory and Time”

Deja Vu is one of those subjects that is both hard and easy to write about. For one, as a metaphysical part of experiences, every one knows what it is. In fact, we have coined the term to represent it and still it seems to be common amongst all of us. Further more, it’s just as abstract as the idea of parallel worlds, dark matter and time travel but we all can relate to the term and agree that it exists.

So how is that? Makes you wonder….it makes me wonder, that’s for sure. Thru experts, thru studies done and thru scientific reasoning, the writers investigate all the angles of this phenomenon. In fact, quite a few of the angles were new to me! As the book begins, the narration explains one concept. That we all have died several times and are just experiencing slips in our previous life as we continue down the last few moments of living. In other words we have slips of experiencing it because we have experienced it already. The final moments are time that has stretched a lifetime in what others see as fragments of seconds. That one threw me for a loop.

Though that may be the extreme notion. More scientific explanations are explained that involve brain chemistry, a slight bit of hallucinogen in our natural systems, and an off timing of the 2 eyes seeing everything for a minute in ruptured time frames. Maybe it’s just parallel worlds that we slip in and out of for brief moments? What about those who speak of prolonged Deja Vu experiences? They are looked at and examined in study.

Premonition, foreshadowing, psychic dreams….what is it all about? I don’t think the book sets out to solve, but rather to explore. After all ….a solving would be absolute, which would mean a finite resolve. No, the purpose here is to explore all the possibilities until proven. I’m sure you will find it as fascinating as much as I have due to its realism, intangibilty and something we can all agree on. Good for us that there are writers who are willing to do the hard stuff… that is, the research, so that we can learn a bit more about ourselves.

In one portion the book goes to say “When dealing with such a subjective phenomenon, of which there is no external confirmation, we have only people’s words that it has happened to base out theories upon.” further polls and studies reveal remarkable facts upon surveys conducted suggesting that the function of Deja vu is more likely under certain conditions.

All this and a constant study of brain activity may in fact reveal some greater truths about what and why. Interestingly enough, other solutions are proposed that potentially unlock the secrets of mind, mystery and time. Could this be a slight precognition that occurs nanoseconds prior to it happening, suggesting an inherit psychic ability that comes in flashes bringing on a recollection that occurs in prior time to it happening?

Further studies delve into the recesses of the brain, which only makes sense seeing that memory is an important part to the puzzle. A discussion leads to the hippocampus and a more thorough exploration on the many types of amnesia. Even documented cases are noted of people who have had total memory loss, fugue states, psychotic episoides and the dreaded well known schizophrenic states. The brain is as mysterious as our galaxy in some respects and yet we have so much unexplored territory that several seemingly metaphysical traits may be attributed to.

In this respect, the book takes the idea much further looking into other aspects such as dual personalities, savants, the concept of suggestion and spells, supernatural, time slips, and even near death experiences. When its all brought into perspective, it’s easy to see that even Deja Vu theories have to lead into other studies that have definite relations. What the end result is a completely thought provoking study that I’m guessing may inspire a few new books from this team in some of these other directions. Great work as always with intentions on opening minds and the mysterious!

Check out other books by the authors as well at: New Page Books 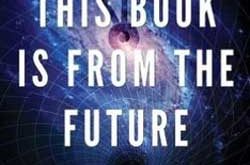 Book Review: This Book is From the Future – Authors Marie Jones | Larry Flaxman