Home | Classic ‘Hills Have Eyes’ brings its nightmare to Blu-ray

Classic ‘Hills Have Eyes’ brings its nightmare to Blu-ray 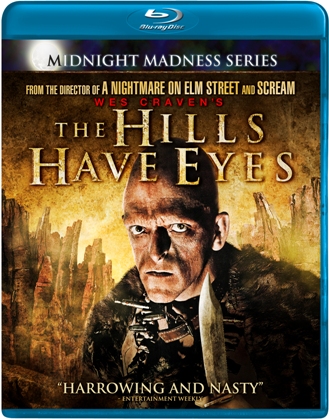 TIME TO FEAST AGAIN ON WES CRAVEN’S CULT CLASSIC – IN HIGH DEFINITION! THE HILLS HAVE EYES

Image Entertainment proudly announces the high-definition debut of a genuine cult gem with the September 6th Blu-ray™ premiere of Wes Craven’s 1977 horror classic The Hills Have Eyes. Featuring digitally restored 1080p video, DTS-ES 6.1 Master Audio sound, and over three hours of bonus features including audio commentary by writer/director Craven, retrospective featurettes on the film and the director, an alternate ending, U.S. and international trailers & spots, photo galleries, storyboards and more! A standard DVD edition, with commentary, will also be available. SRP is a very tasty $17.97 for the Blu-ray™ and $9.98 for the DVD.

Wes Craven (A Nightmare on Elm Street, Shocker, Scream) gave 70’s filmgoers a whole new definition of disturbing with The Hills Have Eyes, starring Dee Wallace (The Howling, E.T. The Extra-Terrestrial) and John Steadman (Fade to Black, Cheech & Chong’s Next Movie). The Carters are an all-American family on their way to California when their car breaks down far from civilization in the remote southwestern desert. But they are not alone. Watching from the hills is a very different kind of clan, a family of marauding inbred cannibals with an unspeakable taste for human flesh and monstrous brutality. In the nightmare that follows, what depravities must this wholesome family endure to survive? In a primal wasteland ruled by lust and rage, who will become the most shocking savages of all?

Susan Lanier (“Welcome Back Kotter”), James Whitworth (Planet of Dinosaurs, The Hills Have Eyes Part II) and genre favorite Michael Berryman (Weird Science, The Devil’s Rejects) star in the film that spawned one sequel, and as well as the 2006 remake.