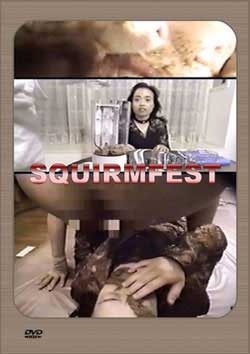 She starts out by eating a dish of noodles and worms before moving on to playing the piano. Once she starts playing, she gets a nice enema and squirts it all over the floor. She is then forced to eat it!!! But it gets worse…Lots of other enema stuff before the grand finale in which she mixes HUGE c**k-roaches, maggots, worms, and her own urine in a blender and then actually drinks it all!!!!!!! If this doesn’t make you sick, you’re not human!!!!!

It’s fair to say, that no one in their right mind should enjoy this film. I’m really not even gonna give it the satisfaction of being called a film, but some one is …so, so be it. While watching this disgusting piece of trash, I couldn’t help wonder if the female main subject was forced to do the scenes under duress or held per out of camera gun point. You see, Squirmfest is an Asian film that has no subtitles. I don’t think the dialog really would have made a difference though. It begins with an older lady who sits down to a dinner table to eat spaghetti filled with worms. Fine, whatever ….I thought as sometimes I believe the whole worm thing is a delicacy or weird cultural acceptance overseas. Even if not, it’s not much worse than what americans have seen on Fear Factor. So she finished off the plates and then drinks a glass of milk filled with some more worms. Ya, I get it, worms…kind of gross but boring. Cut to the next scene, and now she’s eating some food covered with maggots. On screen she seems to not mind, so beside that being something I wouldn’t do, its not gonna kill her right?

Ok, that’s not all folks, as the amateur camera men walk around into the scenes getting different angles, she is asked to sit on a couple of stone blocks and play the piano. A camera is positioned beneath her crotch. Though when the lady starts acting like she is in pain, I wasn’t expecting her to force out urination followed by a full on sh*t fest forced thru her panties. Ya, my stomach was starting to hurt at this point. The camera caught it all and yes it was real and fell out of her ass.

A man dressed in a dinner suit comes out while they interject some weird wig wearing shots for no apparent reason. Now with her sh*t all over the floor and a receptical that was placed to catch the piss, she is forced to start re-eating it all. Yep, mouth full at a time. Some of the bits still contain the maggots which she somehow forced thru her body in the process. I wasn’t gonna put much more thought into it. If that wasn’t enough she is forced to wash some of it down with the piss bucket. So we got sh*t eating, piss swallowing fille with maggots… oh, I’ve seen enough.

A man walks over and sh*ts on her face, real time while her mouth sits open. Some more piss is poured down her mouth to wash it down. Have you heard enough? This kind of theme continues up till the end of the film. Actually it diverts into pure p*rn thru the mid section, but is partially blocked out per a mosaic blur. Though even with the mosaic you can still see what’s going on. In fact I believe the actress enjoyed that section the most as it didn’t involve defecation consumption. The 3rd act is more of the same except that the lady is forced to urinate and consume her piss 3 times in a row. I’m not sure how she was able to squeeze it thru so quick but its all on tape. The final act is a blender mix of urination, maggots, feces and worms. Ya, that wraps it up! 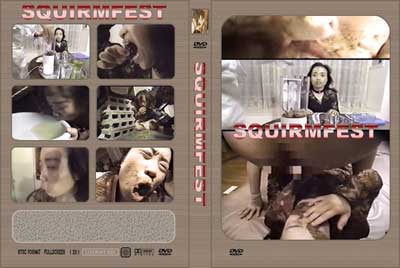 I tried to do “some” research to see how this film turned up on the circuit. According to a few reports, the film has never been released in North America with no plans on it to be. My guess is that’s just fine by me, no one should have to sit thru this filth again. This film doesn’t exist in IMDB or any other sites I could find. It purely is an underground traded film that is exchanged for its pure shock value.

Now that I’ve described the whole thing, do you really want to obtain a copy still? There is a second release as well called “Squirmfest 2” which I have no intention on tracking down. One sh*tty movie is enough. At least one of the most disgusting films ever made, that’s all this film is good for. It makes “Pink Flamingos” look like a visit to the circus. There ya go.