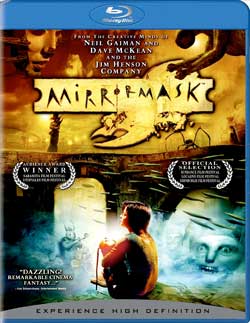 In a fantasy world of opposing kingdoms, a 15-year old girl named Helena who works at the family circus with her father and mother, who wishes–quite ironically–that she could run away from the circus and join ‘real life’. But such is not to be the case, as she finds herself on a strange journey into the Dark Lands, a fantastic landscape filled with giants, Monkeybirds and dangerous sphinxes. She must find the fabled MirrorMask in order to save the kingdom and get back home.

By all assumed standards this film SHOULD be a classic. For art fans, the notion of a Dave Mckean production was enough to cause fan boys and comic fans both far and wide drooling in anticipation. Historically, Mckean has produced some great surreal shorts and stands as one of the most artistic innovators to come out of the nineties. His comic series, book releases, and artistic contributions to the music world have long established him as a talent to follow. So when I first got wind of a trailer for this production, my anticipation was way into the stratosphere of “have to see’s”. 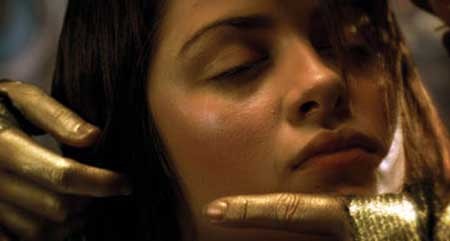 Well, from Dave’s surreal and twisted genius came a full feature by the title of “MirrorMask”. The concept was great, the imagery was fantastical  and the characters were out of this world. With that being said, what could possibly go wrong? I think this is a notion that still haunts me to this day. That notion being…having a Dave Mckean full feature in hand and only wanting to see it once after completion. 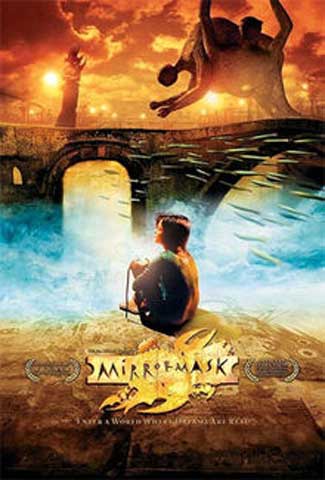 Certainly there deserves an explanation. In fact as a fan boy myself, I’ve dished out hundred of dollars JUST in acquiring Ebay McKean items alone. So before getting into the full breakdown, lets spend some time with the actual story.

Our main character Helen (Stephanie Leonidas) has the chore of being a circus family girl. Her 15 year old intellect is often centered in other places. Namely a fantasy world with a Kingdom at war. Her walls are covered din elaborate sketches (aka per Dave Mckean) and her imagination is on full throttle. It is after a fight with her mother that she enters a dark and imaginative dream world shortly after falling asleep. This world is in fact McKean personified. 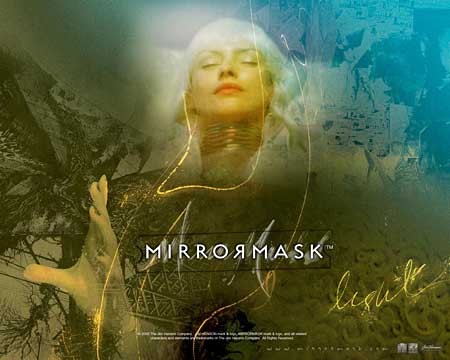 Step into the fantastical mind of Mckean. Those who follow his art will be overthrilled to see some of his striking designs coming to life. Fan boys rejoice! It’s an actual motion picture of surreal beings and oddities……sweet! And best of all its a chance to enter the arena of past classics such as “”Labyrinth”, and ” “Alice in Wonderland”. The experience couldn’t be more enticing. 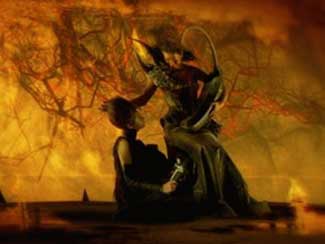 So with all that is said, how could this movie fail? Well I tend to think that it didn’t quite fail, but didn’t live up to expectations. The CGI at times was a little rough, with other times fantastic. The dialog is heavy in UK accents and understanding. So for the westerner audience that it’s mostly geared at, it’s a bit hard to follow (pretentious even maybe?) I wasn’t pulled in and made a believer in many of it’s segments. I suppose this is due to the set being mostly blue screen and the compositions not always feeling connected to the actors. Probably one of my biggest complaints was in the score. The score was beautiful, don’t get me wrong, however it also tends to make me want to sleep. It’s primarily a jazz score. Jazz that one might relax to while sipping wine rather than moving them thru a film. 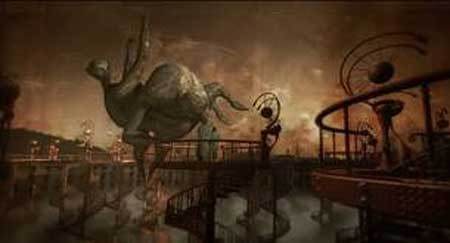 This lethargic feeling that I struggled with in combination with these before mentioned elements made for an experience that was just not what I expected. The plus side of things comes in the inventiveness of Dave’s images. His use of masks, his widely abstract characters, his collaged background and ethereal overlays are all something that is highly representative of his style. Though there is an unbalance. The gorilla chickens are weak in CGI, while the shadow effect (in the fantasy start) is strong in CGI. This constant flip made things uneven.

The odd thing here is that, you could literally take screenshots from the film and repurpose those into dynamic covers and illustrations. However in the animation world it’s going to take, taking things a step further 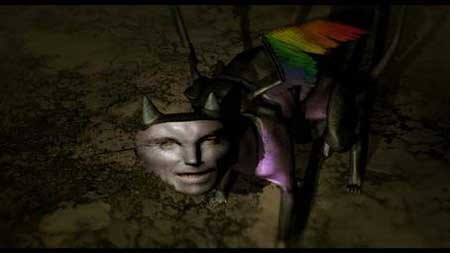 I still believe in Dave and company, but think  maybe his efforts would be more magical if shared with a director who understood the American point of view. He is definitely a visionary, though that vision would be better showcased within a more solid foundation (with bigger dollars to spend)