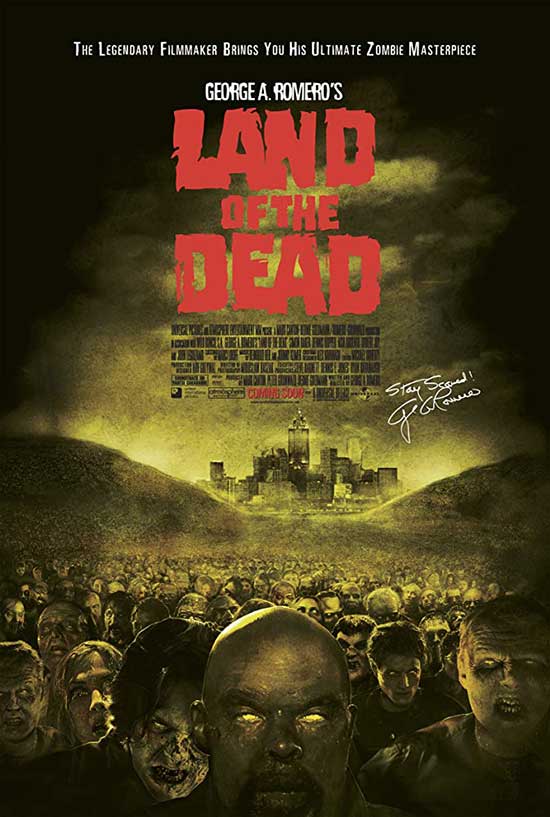 The living dead have taken over the world, and the last humans live in a walled city to protect themselves as they come to grips with the situation.

Ask any horror fan worth their salt to name some of George A. Romero’s zombie movies, and it’s a fairly safe bet they’ll answer with one of Night Of The Living Dead, Dawn Of The Dead or Day Of The Dead. 2005’s Land Of The Dead however might not get mentioned as frequently, as it seems to be something of an overlooked entry in the master’s filmography.

While Romero was far from the first movie maker to put zombies on the big screen (probably the first was Victor Halperin with White Zombie in 1932), you’d be hard-pressed to argue that he wasn’t responsible for the birth of the modern pop culture zombie as we know it today. 1968’s seminal Night Of The Living Dead was where this genre stalwart was first immortalised; a genuine game-changer, Romero wrote, directed, shot and edited this black-and-white classic on a budget slightly over $100,000, resulting in a$30 million smash hit that is still relevant and genuinely unsettling today. 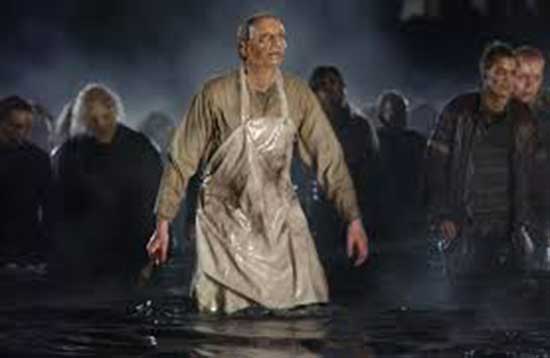 With Night, Romero established a formula that would serve him – and the zombie genre- well; disturbing use of violence and gore, mixed with the blackest of humour and a biting (pun intended) sense of social commentary. He also introduced many of the tropes of the genre that would become so all-pervasive they would pass into cliché; such as the band of hard-bitten survivors of an undead apocalypse, spending their days on the run and their nights in hiding from a never-ending army of shuffling flesh-hungry zombies. Night was also ground-breaking in its handling of race on the big screen; Duane Jones as Ben was one of the earliest examples of a black leading man in an American film.

Romero then took a decade-long break from zombies, before returning with Dawn Of The Dead in 1978. Another instant classic, Dawn benefitted from the switch to colour photography which meant that the gleeful entrail-ripping on display was much more vivid and disgusting than before. Co-written by Romero with Dario Argento, and introducing special effects work by Tom Savini, Dawn was bigger, brighter and bloodier – and this time turned its social commentary towards the blossoming consumerism of the era. It was another massive hit, using its $1.5 million budget to power to a global box office take of $55 million.

Another big hitter followed in 1985, in the shape of Day Of The Dead. This time around the zombies have pretty much won the day; living people are massively outnumbered, sporadically surviving in bunkers and barricaded camps. Day is the slickest entry in the series up to now by far, featuring some superlative gore effects (Tom Savini again) that are still shocking and powerful to this day; is there any fan of the genre that doesn’t know the Captain Rhodes or Private Torrez sequences?? If so then they definitely should. The black humour was out in force too, Bub the zombie being one of the funniest committed to celluloid to this day. While Day wasn’t quite as stellar as Dawn at the box office, it nevertheless returned a haul of $34 million against a budget of $3.5million.

While Tom Savini himself would turn his hand to directing with a 1990 remake of Night Of The Living Dead, it took until 2005 for Romero to return to the director’s chair for an-other zombie movie – which brings us to Land Of The Dead. By far the most expensive in the series so far – with a $19 million budget – Land’s box office stands at $46 million and so was a solid hit, if not in the same league numbers-wise as the previous two entries. It stars Australian actor Simon Baker (The Mentalist) as the main protagonist Riley Denbo; a man of principles in a sea of human dregs, Denbo spends his days using the heavily armed battle tank he designed – Dead Reckoning – to protect the surviving citizens of Pittsburgh, and provide them with supplies which would otherwise be unavailable. Backup comes in the form of his second in command, Cholo DeMora (John Leguizamo) and his long-time pal Charlie (Robert Joy).

The city is divided up into zones, bordered on two sides by water and on the third by an electrified fence. The wealthier citizens live in splendid isolation, in the ivory tower known as Fiddler’s Green; a luxury high-rise complex which shields them from the bloody reality of the zombie-fuelled apocalypse going on outside, presided over by narcissistic businessman Paul Kaufman (Dennis Hopper). Denbo and his crew have noticed on their latest excursions, that many zombies are beginning to show eerie signs of intelligent behaviour; far more than your typical brain-dead flesh muncher, they also seem to be consciously trying to replicate their former human lives. This is exemplified in particular by a hulking gas station attendant known as ‘Big Daddy’, who we see early on attempting to vocally communicate with other zombies, or ‘stenches’ as they are known here.

Denbo has decided to retire; but unfortunately things don’t go according to plan, and before long he and his crew find themselves in a race against time to stop DeMora using the battle truck to vaporise Fiddler’s Green as vengeance against Kaufman’s refusal to grant him residential status. They are also up against Big Daddy and his ever-increasingly cunning plans to invade the human’s refuge and destroy it once and for all.

It’s something of a shame that Land Of The Dead is not as well-revered as the previous films in the series; it combines a big increase in star power with the likes of Hopper and Leguizamo (and not forgetting Asia Argento’s cracking turn as Slack, an ass-kicking hooker who joins Denbo’s crew) with the series hallmarks of bleak humour, sly social commentary and top-notch, inventive practical gore effects. Brilliant though many of these are (highlights include one unfortunate guy having his innards pulled out through his mouth, and a near-decapitated stench swinging his head around to provide a killing bite) there is some ropey CGI this time around, most noticeably in the form of digital blood splatter.

The fact that the stenches are clearly becoming more intelligent and organised, makes them a far more formidable threat than the previous dumb animal zombies who were only really ever a danger through sheer force of numbers; this gives Land a fresh edge over the previous films while retaining their strengths. It is once again a uniquely American film, and an entertaining watch – let down slightly by a somewhat underwhelming climax, this is still the master of the genre at work. Romero would return twice more to the well before his death in 2017, with 2007’s Diary Of The Dead and 2009’s Survival Of The Dead. Any fan of horror, and zombies in particular, owes it to themselves to check out Romero’s seminal work in the genre.