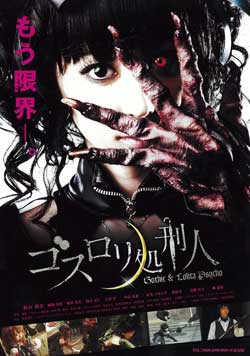 The film stars actress and gravure idol Rina Akiyama as Yuki, a girl who lives at home in peace until one day a unit of assassins breaks in and slaughters her mother. In order to reveal the truth behind the seemingly senseless murder, Yuki transforms herself into a demon of vengeance by donning gothic lolita clothing, wielding a parasol as a deadly weapon, and executing the guilty in the name of God.

Ready for some more Tokyo madness? Look no further than this martial arts-meets-fantasy-meets bloody extravaganza! You have to love these films for there wackiness, as I sure do. Confrontation comes pretty early when Gothic Lolita shows up to do some heavy ass kicking. It’s within these ass kicking sessions that you pick up on the Asian campiness set out by the filmmakers. I mean what’s up with the opener fella and his rapid spaghetti eating habit? Only occasionally raising his head to let in new participants in his underground sex and violence war room. This party background is literal circus of oddities all happening at once. It makes for good fun as you just kind for take in the sites. Lolita pays the place a visit and wipes out an entire team. Though she does have an agenda which we get in an early reveal. 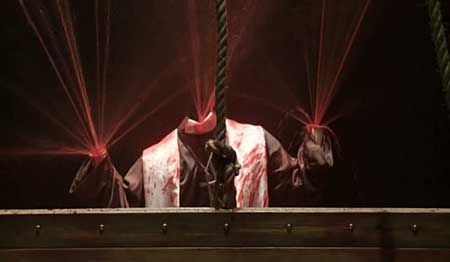 As a teen,  Lolita is forced to watch as her mother is killed crucifix style while her father is beaten, losing the use of his legs. This early trauma is enough mental fuel to inspire a future swordweilding, Kung fu master bearing a knife-edged umbrella. Lolita’s execution methods are carried out in old school tradition with one at a time knock offs. Those who caused her grief seem to be no match for her “now” equipped batch of skills. We get alot of these martial arts confrontations which are backed against a zany experience. 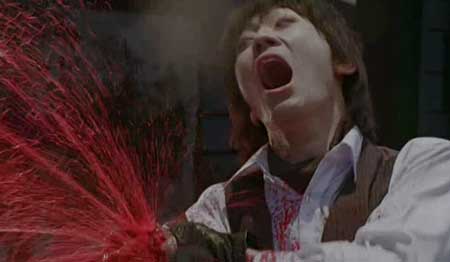 “Gothic and Lolita Psycho” contains plenty of exploding head, body slicing, and blood spraying moments. I think this technique alone is a staple for this kind of filmmaking. I love the occasional odd ball confrontation such as the mentalist who can send his body flying thru the air while sitting Indian style. Even with the obvious use of wires, this is a highlight in the film providing and much humor as bloodshed. Other contenders provide worthy challenges only to get taken down by Lolita. 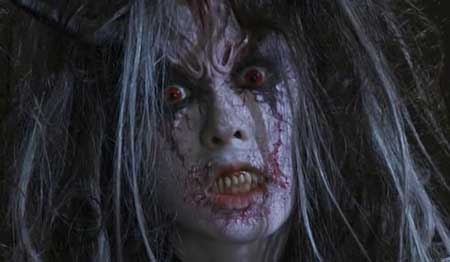 Another really odd section comes when she takes on the “Kamikaze” gang who insist of spelling out their name before hand letter by letter with body language. The acrobats here flip, fly and zip over head almost in the style of a MTV boy band video. It make for a great middle piece and adds that humor we have come to love.

A later competitor (who’s character name escapes me) arrives blazing guns and laughing every step of the way. You tend to think that either she is in on the joke or are just half insane. Each victim is represented by a card, that includes a title listing the confrontation. This old school tradition segments the film while laying down a “Street Fighter” flair.

I won’t spoil the ending, but it comes in fashion that is un-expected. We do get THE final confrontation but the details develop into something more interesting. Gothic Lolita which is more of a nickname is played out by Rina Akiyama who goes by the name of Yuki. The film is directed by Gô Ohara who also directed a similar movie by the name of “Oneechanbara”. 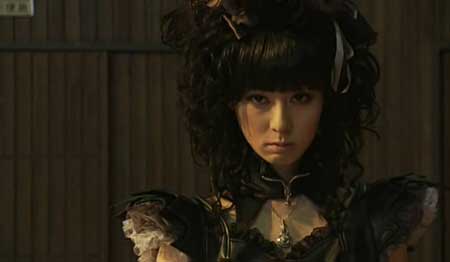 Gothic & Lolita Psycho”, a rather weird film title to begin with has its slow moments mixed with these nutty little challenges. There are a few cgi moments that I found highly original like the man who is able to send his arm stretching across a basketball court while in combat mode. Trust me. you’ll just have to see it. 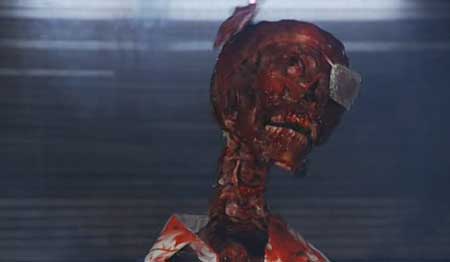 I can say that in this instance, there is alot of the same expectations as other films of this genre. There’s frame to frame action and plenty of bloody dismembering. Even the way blood explodes into geysers from quick kills is more humor rooted than disgusting. It’s all a part of the fun experience that comes with these movies. It is probably worth mentioning that Yoshihiro Nishimura provides the special makeup effects which has become a signal to the style itself. Not the best of its genre,  but also not the worst. If your looking for more titles to occupy your “Machine Girl” shelf, then this one will do just fine.