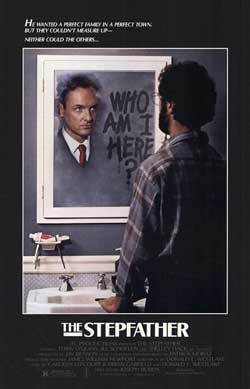 Stephanie Maine is a troubled girl, when she isn’t getting into fights at school or flirting around with boys she is dealing with her new stepfather Jerry. Jerry just seems so perfect and her mother Susan seems very happy and in love. What is Stephanie’s problem with Jerry, it could be that just one year ago in a place not to far from where they live a stepfather went crazy and slaughtered his entire family. Is Jerry a psycho waiting to slash his way through Stephanie and Susan, or is Stephanie just another high school girl with a demented imagination?

Like many great genre films Joseph Ruben’s 1987 film The Stepfather was inspired by the true story of John List, a New Jersey man who disappeared for several years after killing his entire family. The mood of The Stepfather is very dark, but it is sprinkled with enough black humor to keep the viewer entertained. The Stepfather was followed by two sequels and recently a remake was released in theatres nationwide.

I will start this review by saying that the beginning sequence in Joseph Ruben’s The Stepfather is probably one of the most disturbing sequences I have ever seen in a movie. The beginning of the film simply shows Henry starting to clean himself up; at the beginning of the film he wears glasses and has longer hair and a beard. The hair is cut and the beard is shaved off all while Henry looks in the mirror. After cleaning himself up the man walks down stairs where we see his families murdered bodies scattered around the room, he walks past them and calmly makes his way out of the door. Trust me the scene is way creepier than I could ever describe it.

The Stepfather then jumps ahead a year later, Henry of course has already changed his name to Jerry and has gotten himself a job in real estate he has also found a new family and has married his way into it. His new family is his wife Susan who seems extremely happy and in love with Jerry and Susan’s daughter Stephanie. Stephanie is a troubled girl, her real father has passed away and she has trouble coping with it. Her mother sends her to a psychiatrist named Dr. Bondurant, Stephanie likes Dr. Bondurant and she tells him what she thinks about Jerry. To Stephanie Jerry just seems to perfect, he even tries to buy his way into her life using gifts. Stephanie just sees something dark about Jerry and she can’t exactly put her finger on it. Dr. Bondurant suggests that the young girl give her new stepfather a chance, after all her mother is very much in love with the man.

The next day we start to see some cracks form in Jerry’s new life. He is showing a house off to a young family and while he is talking to their young daughter he gets his “lives” mixed up and starts talking about his daughter from a previous marriage. Stephanie also has a very busy day getting into a fight at school which gets her expelled from school. Over dinner she makes the suggestion that she wants to go to a boarding school (what kind of teenager wants this is what I ask?); Jerry doesn’t like the idea at all since it would break up their family. Jerry has an idea of what a family should be and it is very important to him, throughout the film we are offered glimpses into just how important this is to him.

Things really start to get pretty crazy when a man named Jim Ogilive who is the surviving brother to the wife who we saw murdered in the opening sequence convinces the local paper to run the story about the unsolved murder yet again. Jerry and his family are having a barbeque where he has invited all of his clients over. He demands when someone tries to take a picture of him that they get one of him with his family. The party soon is interrupted however when one of the guests reads the local paper aloud and reveals the news story to Jerry. Jerry immediately starts to crack and quickly runs down into the basement and has a psychotic episode that is witnessed by Stephanie. This only causes Stephanie’s suspicions to rise, convinced that Jerry is actually Henry she starts doing her own research to find out about her new stepfathers life. Will Stephanie find out in time, or is Jerry just going to end up moving to another town with a new name and a new family?

Joseph Ruben’s The Stepfather is a very dark film sprinkled with hints of comedy. Terry O’Quinn’s performance as Henry/Jerry though is what sells the movie. In the scenes where Jerry is seen as a nice loving man he comes across that way only to get confused and forget who he exactly is at the moment. The fact Jerry forgets who he is at times only adds to the creepiness of the film leaving the viewer to wonder just how many times has this man done this. Jerry simply wants a perfect family and that is very important to him. In a later scene when he applies for a new job he even states that he wants to work with families. He waves at little children with a smile on his face while he also beats men to death with 2X4’s of wood.

The Makeup artist for The Stepfather also gets a nod from me. We see Jerry transform into a different human being twice in the film (for a total of three different appearances) and he never looks quite the same each time. In fact during the last transformation he actually appears to be a much older man.

There isn’t much of a gore score in The Stepfather, but don’t let that keep you from viewing the film. When Jerry lashes out and starts showing his true side it does get quite violent. The death toll also isn’t all that high; in fact only two deaths are seen on screen. The Stepfather isn’t about blood and gore to get its frights from the viewer though, its all about the mood and atmosphere and the movie just oozes with it.

The Stepfather is a wonderfully creepy film that should be viewed by genre fans and single parents. Perhaps a simple viewing of this particular film could keep you from choosing Mr. or Ms. Wrong next time. 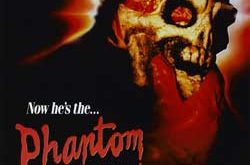 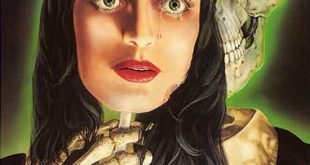 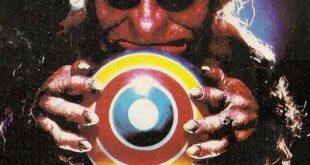