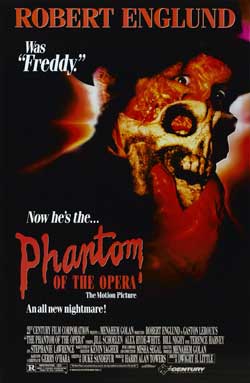 A newer, gorier version of the classic 1910 Gaston Leroux tale has A Nightmare on Elm Street’s Robert Englund playing the Phantom. Christine Daaé is a young Broadway singer in New York City. She is auditioning for a show, and comes across an old piece of music written nearly 100 years before by an unknown musician name Erik Destler. Destler it seems had made a pact with the devil (maybe by accident) so the world would love his music, the catch was Erik’s face would be left horribly disfigured forever. Once Christine sings his music for an audition, she is hit with a sandbag, thus follows a presumed flashback into the past roughly around 1881, where she was the star in the London Opera House. There she is coached by a mysterious “Phantom” who will do anything to make his protege a star, even if it means murder. Christine soon finds out that her teacher is in fact Destler, whom she comes to loathe.

1989’s Phantom of the Opera tries to be both a horror movie and a period piece, but really only succeeds as a horror movie and barely. It was an interesting attempt, but period horror is very difficult to pull off successfully as it is hard to place yourself in the shoes of a 19th century London opera goer. That being said this movie is still very entertaining.

The Phantom/Erik was played amusingly by a well established Robert Englund who took to the Phantom make-up quite easily already having several Nightmare on Elm Street films under his belt. Englund’s make-up was easily one of the best things about the film as the Phantom went through several intense transformations throughout the film as his wicked intentions regarding Christine Day were divulged. In this version of The Phantom of the Opera the Phantom’s masks were the skins of his victims. Englund’s version of the Phantom was far more psychopathic than we have ever seen on film before changing the character from a tragic villain to a full blown movie slasher.

Some may be tempted to compare Englund and Lon Chaney Sr.’s classic 1925 performance but they are in actuality worlds apart. The time displaced Christine, played by veteran scream queen Jill Schoelen, disappointed though, as she did not even attempt an English Accent.

The movie opens in present day New York as Christine rushes to the basement where her best friend Meg (SNL alum Molly Shannon) discovers an old piece of rare sheet music titled Don Juan Triumphant. Meg proposed that she use this rare piece to stand out in her audition for a Broadway musical. Meg was able to dig up some information on the author Erik Destler, the author of the piece. He was a brilliant composer who also was a known psychotic killer, but could not be locked up due to lack of evidence. Christine wowed the producers, but out of nowhere a sandbag falls from the catwalk and modern day Christine awakens as her in a past life in 19th century England. Christine is the understudy in the lead in Faust and the Phantom has been appearing to her every night giving her voice lessons claiming to be her guardian angel.

The enamored Phantom eliminates all those who would stand in the way Christine’s musical success, including killing the man who dropped the sandbag on her and hanging his skinned body in the closet of the diva of the evening whom Christine was the acting understudy giving her such a scare she could not perform . Most of the movie focuses on the characterization of Englund’s phantom, being the obvious box office draw to horror fans. The Phantom marauds through the film taking many lives and really ups the body count. Scotland Yard’s Inspector Hawkins (Terence Harvey) begins tying the deaths together to Christine and warns Christine’s love interest, Richard (Bill Nighy), about his and Christine’s impending danger in the face of the Phantom of the Opera.

I have never seen the musical version or read the novel of The Phantom of the Opera, so I cannot make comparisons on a critical level, nor do I think it’s fitting to compare this film to Lon Chaney Sr. unforgettable horror masterpiece. From what I have read though this Phantom of the Opera from 1989 is one of the more faithful adaptations of Gaston Leroux’s novel despite transferring the action from Paris to the London Opera house. The other notable exception is the lack of the falling chandelier scene.

One aspect I very much enjoyed was the Faustian element as Erik was promised musical immortality and in exchange had his face severely burnt. The use of past lives muddled the plot and was very confusing. Jill Schoelen is one of my favorite scream queens from the 80’s and early 90’s, but her fact she didn’t even attempt an accent really removed her from the action.

This movie was tossed to the side because of the popularity of the musical and an oversaturation of horror movies in 1989. Overall I recommend this movie for real horror Phantom fans and fans of period horror.