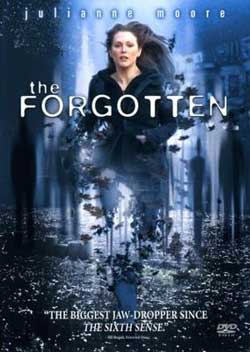 Told that their children never existed, a man and woman soon discover that there’s a much bigger enemy at work.

Hit or miss director Joseph Ruben (Dreamscape, The Good Son) was brought on board by Columbia Pictures in 2004 to helm  the sci fi thriller, “The Forgotten.” “The Forgotten” was written by scribe Gerald Di Pego (The Death of the Incredible Hulk) and stars Julianne Moore (Jurassic Park: The Lost World) as Telly and Dominic West (The Awakening) as Ash. Rounding off the cast are Gary Sinise, Anthony Edwards and Alfre Woodard as Det. Pope. The movie takes place in New York City and sports an very eerie score from James Horner (Aliens, Titanic). Di Pego’s story centers on Telly (Moore) as a mother who is thrust into a nightmare where she has to learn to trust people and recruit allies in order to solve a very strange mystery. Di Pego treads carefully into Hitchcockian territory with a lead character who has to appeal to everyone else that she is not delusional and in an interesting twist Di Pego solidifies that Telly knows that she is who she says she is and tries hard to convince others of her dilemma.

It is this device that makes “The Forgotten”  an interesting, though flawed, character study that is propelled by a bit of a routine narrative that perhaps would have worked better on the small screen. Director Ruben uses his strengths in storytelling right away establishing “The Forgotten” as a slick and pretty linear chronicle that delves into some heady territory. Di Pego examines the dynamics of memory, loss, choices and euphemisms. In this quick and encompassing playing field Ruben relishes in dropping in small clues and hints into what is going on in the presently convoluted mind of Moore’s Telly. Her memories of something that had never even happened awakens the beast that puts the past, present and future on a collision course.

Ruben’s film opens with mood and though it appears to be a somber piece, the capable material under Di Pego’s watch is much more under the surface. Telly has suffered a loss when her son, Sam (Christopher Kovaleski) died in a small plane crash while he was on a camping trip. Telly is lonely, defeated and struggles with loss but something has changed in her world and her place in the present seems to be linked to a deeper mystery in the past. Throughout the film we see in flashbacks what happened during those last few moments when Telly and Sam last saw each other. Each time we are witness to this, something changes or becomes askew. It is something that happens often in the movie that is relevant but occasionally distracting. In essence it doesn’t hamper the proceedings much. 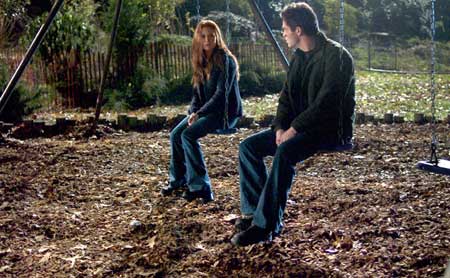 Moore successfully charges through the material making Telly her own as she is spent trying to figure out why things seem different in a universe which seems to not acknowledge the existence of Sam or the tragedy that took his life. She appears to be “forgetting” things and as a paramnesiac (a distortion of memory in which fantasies and objective experience are confused) it is the job of her therapist, Dr Munce (Sinise) to help her through all of this. It starts simple like she begins to misplace things, forgets where she parks her vehicle among other odd occurrences. Dr Munce and even her close friend El (Eliot) played by Jessica Hecht (The English Teacher) do not believe Telly’s claims that her son had even existed and they feel that she is approaching a bit of a set back that could result in a full out mental breakdown. When Telly confronts her husband, Jim (Edwards), he too tries to tell her that she is being quite irrational and even acting paranoid and delusional. After Telly avoids being put away in a psych ward at a Hospital, she seeks out another person who she learns may have lost a daughter in the same crash that claimed Sam. Actor Dominic West is impressive here as Ash. He believably and stoically plays opposite Moore. He is a strong but haggard character that is hands down one of the better written and fleshed out of all Di Pego’s players. Their first encounter does not go so well as she tries to reason with Ash and lets him in on what has been happening to her and the memories of Sam. Ash reacts by telling her he had no daughter and Telly gets arrested for causing a scene. 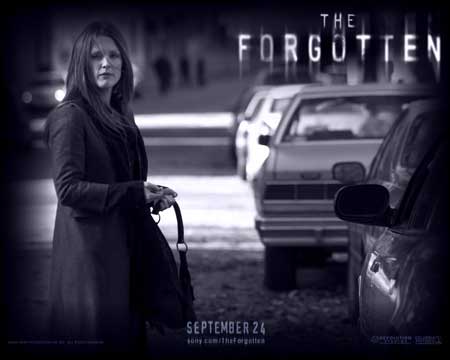 Eventually as Ruben mysteriously advances the story, Ash remembers having a child while searching through out his apartment and finding out a secret literally on the walls of his home. He goes after Telly and they begin to combine their experiences and resources to try and figure out why no one seems to remember their mutual tragedies. The NSA becomes involved and thus Ruben’s picture takes off in an interesting and engaging manner that involves conspiracies, cover ups and strange allegiances between the NSA and “Them” who we are helping in order to prevent harm from coming to mankind on earth. It is indeed a precise story that is indeed intriguing but the devil is in the details. Di Pego and Ruben are capable in execution but they fail in convincing and eliciting any real fear and suspense. The material devolves into some mumbo jumbo about the bonds between Mothers and Fathers and their children. A sort of “lab rat” crisis emerges from the story which causes it to become a tad superfluous. All is not lost here. What remains strong through-out the movie is the cast and performances. Moore and West do have chemistry and even though there is a bit of a romance brewing it is never intrusive or in your face. They both emerge very truthfully as people in peril and given some exciting but all too familiar close calls and chases they retain the quality of their craft and stay perfectly in character. Actor Linus Roache (Batman Begins) plays one of “Them” and he is both menacing and enigmatic with an air of the otherworldly. He is strange, mystical and Ruben uses his gifts in playing a sublime figure that is fun to watch. Woodard’s Det. Pope is also nice to watch as she gets further than anyone else to the mystery that has enveloped Ash and Telly. 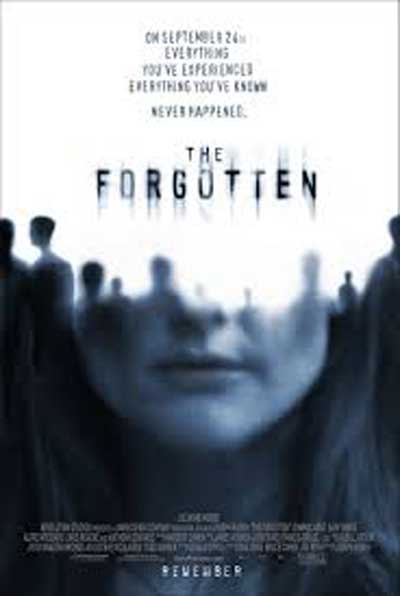 By the time the climax unfolds in “The Forgotten” we have been treated to an average affair that has some decent genre moments (scenes of victims being “plucked” are pretty cool) and some routine by the numbers type of triviality. DP Anastas Michos, who shot the beautifully done “Quiz Show” stands out here with his completely enveloping photography of NYC and outlying areas. His work is quite moody and very ethereal. Though the movie’s parts are better than the whole, Di Pego’s material and all of the subtext is also an enough reason to recommend the film. It is an interesting take on the alien conspiracy angle. It is an acute study of the psychological effects that paranoia, fear and loss can have on one’s psyche. Ruben always, through his actors, keeps this right under the skin of the movie and he creates a universe where things are not what them seem and situations that may or may not have occurred. Emotions play a strong part in “The Forgotten” and Moore and West interact with those who are on “Them’s” payroll so to speak creating misgivings and distrust among characters. 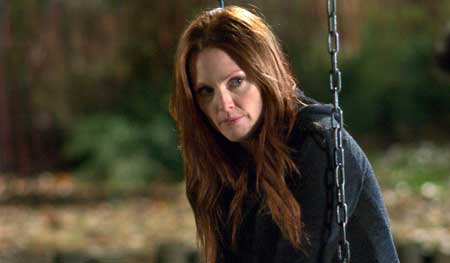 A theme that became a staple in Carter’s “The X-Files” and some other shows of the same ilk including Serling’s “The Twilight Zone.” Some aspects of the film may be a bit too saccharine for my taste but it is effective and has some great “jump scares” that I didn’t see coming. The pace is good and it is full of many moments of illicit dread and doubt that are solid. The movie is good but not great. I feel that more tension and maybe a bit more of well placed cuts in the drama would have elevated it to a must see film. It isn’t flashy or loud or patronizing and to it’s credit I thought it was a wise move on Ruben’s and Di Pego’s part. It is an urban tale of conspiracy that despite some plot devices that are transparent, remains more of a sci fi thriller geared towards pure sci fi fans. It just does not avoid some melodramatic flourishes that dips it into a pool of averageness. The film’s ending, too, is quite negatively received in many circles as being a “Hollywood Ending” and I feel that there is some merit in that assessment. But I give the film a pass in that department. “The Forgotten” is a cool little (probably mostly forgettable, unfortunately) film for a rainy Saturday afternoon or if you are home in bed with the flu it could be a spooky time filler while you wait for your NyQuil to kick in.

Note: There is a Alternate Ending to Ruben’s film which according to many, is a better cut of the movie. It is available on the DVD. This review is of the original theatrical version.