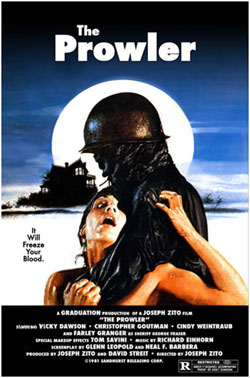 In one of the more angry entries into the slasher cycle a young soldier returns home from the war only to find that his sweetheart has left him for another man. The soldier tracks down his sweetheart and her new lover and quickly impales the both of them on a pitchfork during the local college’s graduation dance. After the nasty events of that evening the town has put an end to having the annual graduation dance, but now 35 years later the dance is once again returning. The dance however isn’t the only thing that has decided to come back.

“There’s a bunch of kids over there in the cemetery… I know what they’re doing in there.”

During the late 1970’s and the early 1980’s the slasher film became the king of the horror genre. After John Carpenter scared the hell out of America with Halloween it seemed like studios were just jumping at every movie with a masked killer murdering young teenagers. Holidays were of course the first subjects to be covered by this new genre and when the studios ran out of holidays they immediately began to jump on events that occurred in every young persons life, eventually these films found their way to the “school dance”.

Joseph Zito’s The Prowler starts by showing some stock footage of soldiers coming home from World War II; it uses those old movie highlight reels to give it a more authentic touch. At the end of the reel the narrator explains that some of the young soldiers are only going to be coming home to Dear John letters and sure enough after the highlight reel is over the viewer gets to see and hear a Dear John letter written by a young girl named Rosemary.

It isn’t long before the viewer is introduced to Rosemary and her new beau while they attend the dance. It’s only a matter of a few minutes before the two young adults find their way outside to a gazebo for a quick make out session. They aren’t alone however in their throes of passion, there is someone in the distance watching them dressed in military fatigues and armed with a pitchfork. During a segment that is very drenched with atmosphere the stalker eventually finds his way to the young couple and impales the two of them together on the pitchfork. The Prowler’s effects were done by Tom Savini, who in the documentary Going to Pieces stated that it was his best work; it definitely is Savini’s darkest work as Zito never once turned away the camera during the films many violent murder scenes, but we will talk more about that a little later.

The Prowler uses the flashback of Rosemary and her lover’s death to set up the tone for the film which starts up again only this time it is thirty five years later. The local college is once again having its graduation dance which has left some of the locals pretty upset. One local in particular becomes so upset that we get to watch them put on military fatigues and arm themselves with various knives and of course a pitchfork.

Joseph Zito has set up a lot of interesting characters to occupy his slasher film. The viewer of course gets to meet all of the young adults that will eventually become victims to the prowler. There is a creepy old man character that lives across the street from the girl’s dormitory, it is revealed later that his daughter was actually Rosemary who was murdered at the beginning of the film. A store clerk named Pat is seen throughout the film spouting one liners and showing obvious distaste for the young kids and their celebration, the local sheriff is there but don’t worry he isn’t around for long as he is going on his annual wilderness vacation leaving the young deputy (who cant seem to get enough of the college girls) in charge. Needless to say Joseph Zito has set up his film with a lot of red herrings that will keep the viewer guessing until the actual prowler is revealed.

Like a lot of the slasher films that were around in the era there is a survivor girl. The survivor girl’s name is Pam and where you have your survivor girl there is always the sweetheart guy to help her out this is Deputy Mark London. The rest of the cast really doesn’t matter as they are just fodder that is set up for some pretty remarkable set pieces. Pam spends a lot of the film being scared; she literally bumps into the prowler after he has already dispatched a couple of her friends.

It doesn’t take very long before Pam and Mark start doing their research, all while the dance is going on and people are being murdered, and learn what happened at the graduation dance years before. The final show down between Pam and the prowler (where the prowler shows up at her door with a rose asking her to be his date!) is also a thing of beauty that even connoisseurs of the slasher genre can appreciate as Pam uses the prowlers own weapons against him just before his violent death, Joseph Zito made darn sure there wasn’t going to be a sequel to his entry in the slasher genre. I will point out though that The Prowler is one of the reasons that Joseph Zito was behind the director’s chair in Friday the 13th IV: The Final Chapter.

Fans of the Final Chapter will also no doubt recognize that both of the titles also have Tom Savini doing the effects. The effects in The Prowler are one of the main reasons to watch the film. The graduating students and any who get in the prowlers way are disposed of in very violent fashion, this isn’t limited to more pitchfork impalements (one done in a shower!), a head is impaled by a bayonet, a young woman’s throat is slit in a swimming pool and heads are blown completely away by shot guns. Joseph Zito’s killer isn’t happy with just using one instrument of death and it is apparent that Savini had a lot of fun with creating these horrifying images of death.

Joseph Zito’s The Prowler is a great example of the early slasher film; this is well before the franchises began to take over the subgenre. Although the cast is relatively a bunch of unknowns they all handle their roles quite well and the pacing of the film between the grisly murders is paced quite well. Like many of the films in the subgenre there is also that “final scare” sequence. The Prowler doesn’t mess around with its final scare as it truly is a terrifying last shot that I am sure still could give the hardest horror fan a little trouble with getting some sleep. Fans of the slasher genre should already have a copy of this one in their libraries and if you still haven’t seen it yet why are reading this and not immediately getting your hands on a copy?