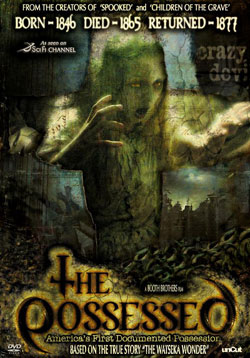 The belief in possession by evil spirits plagued the darkness of the 18th century. Madness and hysteria spread, classifying the cripples and mentally ill as “Being under the control of the Devil”. These misfits became the victims of bizarre exorcisms or ” Casting Out Rituals”. Banished and removed from society they were locked away inside brutal asylums. Left helpless, alone and afraid they were branded “The Possessed”.

“Angels to Some Devils to others” – no we’re not talking about the Hellraiser films. Our journey is an investigation in the form of the recent “The Possessed”. A documentary covering specific cases of reported possessions. Several instances are featured though the primary one comes in the form of the “Wateka Wonder”. A rather bizarre case that extends not one generation but an additional possession of another in town. Mary Roff who died at the young age of 18 was a sufferer of seizure episodes and violent fits all her life. In 1877, things were different with many of these case easily dismissed as insanity without the present medial knowledge we have today. Mary Roff is explored, researched and contacted though psychic mediums. The results are startling.

The Booth Brothers put together another fine documentary piece that explores this very phenomena. In the course of the film, we also hear about cases such as the Annilease Michel (Emily Rose ) case, Dewi Morlaine, Marcus Tallbull, Kelly March and Michael Jones (who dies 26 times as a primi baby). Each of these cases are documented possession cases that are still highly controversial to this day. Though the clips are intertwined more in the scheme of the film rather than into great detail. The intent here is to unravel the mystery of Mary Roff and Lurancy Vennum.

Devices such as an ovilus are used to read energy into words. While the device is questionionable, the words chosen are what is haunting about it’s results. A rather unique device, that I don’t fully understand.

The question asked is, is this possession or reincarnation? Lurancy Vennum became overtaken by the spirit of Mary Roff at the age of 2. Evidence presented shows that Lurancy was indeed possessed due to the details she verbalized without having any any relation or previous knowledge of The Roff family. As we dig deeper we find that Mary Roff often spoke in foreign tongues for no reason and possessed clairvoyance skills in which she could even read the contents of a sealed envelop. Mary who died at the young age of 18 became fascinated before hand with Bloodletting and the use of leeches to purge the evil spirits. the whole ordeal was furthered damaged by her families action to put her into a mental asylum. Whatever the case may be, the finger points to a possession of pure evil rather than angelic.

Through investigations we find similarities in the fascination known as “cutting” who Kelly March confesses to. Even to the bizarre extent of cutting so bad the flesh would literally hang off. Argued that the action was a result of the person claiming to rid of evil spirits, this is also a modern day affliction that many actually suffer from due to mental issues.

Visits to asylums are chilling in there current day distressed forms. A tour reveals some highly dangerous methods used in the old days involving the drilling into one’s skull “intrepidation” and former elements used to experiment on the mentally ill. In one report, we are shown a chair that a patient was strapped to for 6 months while there head was enclosed in a covered box. Other methods reveal extreme temperature water tubs used to shock the systems. In any case these were times of extreme questionable medical practices.

Overall, while the film projects a haunting ghostly tone, there is a solid sense of compassion for the sick and troubled. I was personally hoping to see more of the original Emily Rose case”Anniliese Mitchell” but it was only mentioned in passing with some quick footage. The audio though from that case is beyond frightening.

As in previous releases the team uses a variety of tools to help define the evidence. These include EVP’s, thermal imaging, heat sensors, and a soem help from seances, mediums and psychics.

The film features a nice mix of segues, from person to person who were subjected some degree to possession and spiritual activity. A fascinating piece indeed.

It’s strength comes in the evidence and progress made on the Roff and Venumm cases that resolve and emphasize the notion of life after death and the spirits that linger. I think the production fits perfectly in with the level of consumer interest in all things supernatural. The product is well done and the story is equally impressive.