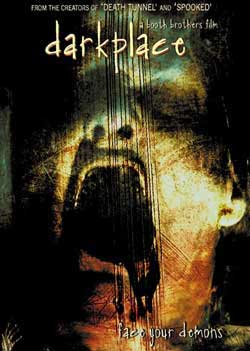 A hillbilly giant and the local preacher exorcise their ritual of dark cleansing by locking you up inside an ancient box forcing you to face your inner demons. But when a 10 year old boy is locked up inside, his darkest fears sets loose an inferno of relentless evil.

“Guilt can be an evil thing”

DarkPlace is one of the new feature films created by the talented TwinTalk team. As it notes in the credits it is loosely based on the book Dante’s Inferno. Those aspects are more relational than literal. For those paying attention you’ll notice the Dr (Dougald Park) who goes by the name “Virgil Nichols”. Virgil being a central character of the book. You’ll of course notice the “Abandon all Hope” sign and the indirect referrals to the soul’s journey. Though past that aspect, any descent into levels of hell is more indirect than literal. The constant appearance of creatures in the journey would suggest the states of mind and the conflict of inner demons.

If your confused, then let’s back up a bit. The film is centered on the idea of the “Shadow Box”. The box is a old myth of a crude device they used to enclose folks who needed time alone to face their demons. Our setting is an upright metal box about the size of a outhouse located in the middle of the woods placed for exactly that purpose.

Dr Nichols begins a journey when he receives a call to set out to Fern County located in Darkwood, Appalachians. As he prepares for his train ride, we get a glimpse into his obsession with clippings, old photos and images of this mythical shadow box.

The scene is nicely accented with the filmmakers knack to include old antique props and papers to enhance the mood of the piece. We are also introduced to Ian (Timothy Lee DePriest), a troubled youth who we are plunged into his thoughts, hallucinations and frames of madness. Much of the film follows this path as the film plays out like a nightmare in motion. As mentioned even in the dialog, these are “twisted visions based on fragmented activated memories”. Taking this statement into context, we are catapulted very quickly into a visually enhanced plot that bases its entire script in this direction. Ian flashes back and forth to situations, an asylum, the past, the future, his mother’s death, his fathers abuse and everything in between. In fact the lines between Dr Nichols and Ian become extremely blurred at times as to there roles and purpose in the film. We do eventually reach a resolve that connects the dots. Though the intended experience is presented in the form of a rather complex puzzle.

Now add to that a welcome appearance by actor Matthew Mcgregory (Manson videos, “Big Fish”..) who I could only connect to the symbol of a rather bizarre reaper of sorts. His appearance is eerie and foreboding even in simple feats such as walking across a field.

The movie employs a number of interesting shots that I felt should be noted. Director Philip Adrian Booth gives us a visual run using tilted camera shots, forced perspectives, and even comic book like panel associations. Nothing too extreme, but enough to make a difference. This art of 3/4 off center shots that pop back into place help to enhance the dynamic aspect contributed mood of the film. Beyond that we have a mix of lighting techniques employed combined with some pretty freaky demon manifestations. My favorite being the indirect “Hellraiser demons tribute.

The score by Christopher Saint Booth plays out appropriately eerie and inventive. In fact the closing song “Dark place” had me fooled for a second as a Marilyn Manson song until I dug further in the credits and realized it was another impressive “Saint” produced number.

This is not your usual served up horror. It’s purely psychological. The powerful vision aspect reinforces the mind trip tone of the film. There is alot of suggestive dialog that points to clues within the narrative, but I wont lie….this film needs careful concentration to take it all in. In fact whenever a film follows a path created from nightmare dream states you know its going to come at you in bits of delusional moments.