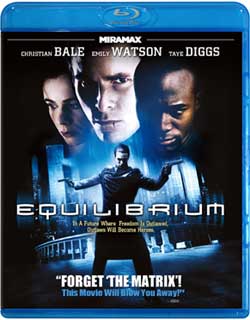 In a futuristic world, a strict regime has eliminated war by suppressing emotions: books, art and music are strictly forbidden and feeling is a crime punishable by death. Cleric John Preston (Bale) is a top ranking government agent responsible for destroying those who resist the rules. Whe he misses a dose of Prozium, a mind-altering drug that hinders emotion, Preston, who has been trained to enforce the strict laws of the new regime, suddenly becomes the only person capable of overthrowing it.

It’s not a stretch to say, actor Christian Bale has been within some of my all time favorite movies. Take “Terminator” out of the mix, and usually his performances have been a win-win for me. This not so recent gem by the title of “Equilibrium” has arrived from Echo Bridge on Bluray. If you are a fan of action sci-fi, future-driven films and those with a Matrix edge, you’ll have to pick this up.

As we begin, we are told that the first years of the 21st century were in chaotic disorder. This change had to be dealt with “change”. Namely the eradication of all emotion and feeling. As far fetched as that sounds, the object was to control human emotion from heightened levels so that all could coexist without violence and extreme feeling getting in the way. This ideal was governed by a figure who calls himself the “father” and was backed up by daily does of Prozium. Prozium is a mind altering drug that inhibits emotion. To also back this up, all creative sources such as art, music and personal items were to be removed and burned. The law is enforced by policing soldiers who send all violators of this order into “processing”. Processing is essentially a death sentence.

Now, out of the order arrived a new type of enforcer called the “grammaton cleric”. The grammaton cleric is a highly trained enforcer who is able to arrive into a crowd and mathematically take down the entire room by use of guns, weapons and a marital arts. The technique is the highlight of the film which is pretty impressive to watch welding lightning fast moves in a almost stance and precision attack mode. Christian Bale is John Preston, one of the top in this art. His emotionless approach and allegiance to his government makes him more lethal than a entire group of scolders or machine gunning assassins. His role as a cleric has an almost religious feel to it dressed in a Matrix-Neo garb.

The premise is not only about control, but about “loss” of control when John stops taking his daily does of prozium. He begins to “feel” and decides that what he is doing is actually wrong. His family is also under constant scrutiny to stay within this zombie like state. Though as word of an underground movement begins to emerge, his intentions to uncover them become a turn-around to their aid. Taye Diggs stars as Brandt, his newest partner. Brandt was assigned when John was forced to murder his partner who was showing signs of emotion.

Emily Watson is Mary O’Brien, a “sense violator” who was discovered to having containing pirated banned personal items. John begins to realize the errors of his society while Mary awaits her death sentence. Mary also sparks a turn for emotion within John.

The movie presents a highly Utopian big-brother style of movie, that almost makes sense in a solution kind of way. Certainly the loss of individuality is something we all can’t phantom, though it does prove to be a working solution for producing productive society members over the free-thinking choice driven.

Christian Bale wields his trained art with a unique visual flair that proves to be as exciting as any “Punisher” film. His talent for dramatically changing from emotionless to anguish is impressive and fitting for the role. In fact, his performance is much more believable than Taye Diggs. Taye Diggs at times seems to step outside his character suggesting that he isn’t taking the drug, but this facet is never disclosed. A final showdown in the film proves to be one of the most action packed I’ve seen on screen.

This gem seems to have flown under the radar a bit since its initial releasing 2002, but is certainly a must see.

Equilibrium is available from Echo Bridge – now on Bluray