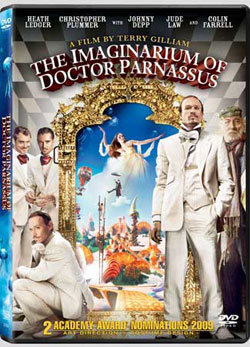 In London, the sideshow troupe of Doctor Parnassus promises to the audiences a journey to the “Imaginarium”, an imaginary world commanded by the mind of Doctor Parnassus where dreams come true. In the stories that Doctor Parnassus tells to his daughter Valentina, to the midget Percy, and his assistant Anton, he claims to have more than one thousand years; however, when he felt in love for a mortal, he made a deal with the devil Mr. Nick trading his immortality per youth. As part of the bargain, he promised his son or daughter to Mr. Nick on the sixteenth birthday. Valentina now is almost in the doomed age and Doctor Parnassus bets with Mr. Nick that whoever seduces five souls in the Imaginarium will have Valentina as a prize. Meanwhile the troupe rescues Tony that was hanged on a bridge by the Russians that explains why he had been chased and he joins the group. Tony and Valentina fall in love for each other and the jealous Anton discovers that his competitor is a liar.

From the mind of one of the most prolific director / artists in filmmaking comes Terry Gilliam’s latest masterpiece “The Imaginarium of Doctor Parnassus”. The film easily combines the best of his styles over the years from the man who brought us the unique visions of films like “Time Bandits”, “The Adventures of Baron Munchausen” and “Brazil”. While his previous film “Tideland” was a bit off base for fans expecting alot more from his style, “Parnassus” delivers with full force and imagination. Strange, bizarre, dreamlike …these are all qualities that can firmly be placed upon the film with mixed emotions.

Doctor Parnassus played by Christopher Plummer is a traveling performer who tours the countryside with his vaudeville troupe in hopes of selling tickets to his show of storytelling and fantastic opportunities. When the doctor enters into a trance, a subject is permitted to enter a makeshift mirror that takes them instantly to the world of theirdreams..aka the “The Imaginarium”.

It’s a different experience for each as the visions are directly fueled by the imagination of the participant. Though upon entering it becomes an instant fantasy world ending always with some kind of choice decision before leaving. The experience is more than just a play on mind tricks, it’s an actual environment that unfolds almost like the subject is taken to another world. These scenes are the highlight of the film that stems purely from the creative talents of Gilliam. In the behind the scenes, we are shown a few of his advance renderings….art pieces in themselves that demonstrate his amazing talent for vision. Fans of his work will appreciate all the “best” of Gilliam coming to the forefront in this movie.

Heath Ledger stars as Tony, a fast talking, charming con man who is taken in midway when the troupe discovers him hanging from a bridge. Those familiar with the films background know that the actor had died before its completion. So as a story builder, Gilliam brought on the talents of Johnny Depp, Jude Law and Colin Farrel to play Tony’s transformation whenever he re-enters the mirror. The idea plays well and doesn’t miss a beat as the story line is modified to accomodate Ledger’s untimely demise.

The Troupe as I call it consists of 1 midget (Verne Troyer) Percy, Parnassus’s daughter Valentina (Lily Cole) and (Andrew Garfield) Anton..one of the performers. Parnassus is discovered to be immortal from a botched deal with the devil played by Tom Waits. Parnassus comes from a monk like beginning that inhabited a mountain palace intent on keeping the world going by a constant telling of stories. The devil who calls himself Mr. Nick loves a good bet and taunts Parnassus over the years by reintroducing new bets when Parnassus is due to pay up. Meanwhile Anton grows jealous over Valentina’s sudden attraction to Tony which cause an added drama within the traveling sideshow. The years have changed as Parnassus days as a story teller have waned with the modern times.

His vehicle, an odd old time, carriage/bus/house on wheels provides the base for this group who gives one off performances on the road. Parnassus has grown tired though of his immortality which in cruel sense has only given him the ability to watch his own demise over time. The devil comes a calling for the Dr.’s daughter who’s soul was lost in one of his former bets. The film explores the fantastical as the 2 square off on final bets. The final bet is a challenge to find 5 souls before the other one.

My advice though is to watch the film with the subtitles on as the accents used through out are a bit to British for many to follow word for word. It was for this reason alone I wanted to wait to see the film on DVD.

The Imaginarium of Doctor Parnassus is perhaps the years most imaginative release to date. Fans of Gilliam will appreciate his remarkable vision and approach to bizarre details. Truly an awarding viewing experience!

The Imaginarium of Doctor Parnassus (2009)