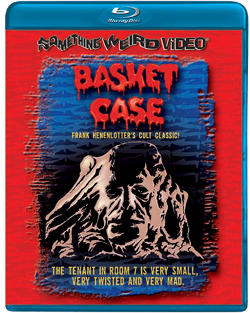 First assaulting our senses way back in 1982 BASKET CASE tells the tale of a man and his brother whom he carries around in a a wicker basket. A true classic of independent horror cinema BASKET CASE will finally be making its long over due trip to Blu-ray on Sept. 27th and I’ve got the scoop for you.

In 1982, a low budget horror film raised its twisted head and created a buzz with a strange mix of comedy, gore, sleaze and heartfelt pathos. On September 27th, Image Entertainment and Something Weird proudly join forces to unleash Basket Case in a brand new HD transfer supervised by writer/director Frank Henenlotter. The Blu-ray has an SRP of $17.97 and also contains a basket full of bonus features including an all-new video introduction by the director, commentary tracks and outtakes.

Carrying a mysterious wicker basket wherever he goes, Duane Bradley checks into a flea-bag hotel in New York’s Times Square. What’s in the basket, you ask? Why, it’s Duane’s hideously misshapen Siamese twin brother, Belial, who seems to wield some sort of odd control over his more normal looking brother. Together, they’re in town to hunt down and wreak havoc on the sick surgeons who separated them, but this isn’t your normal revenge flick.

With memorably gruesome scenes and some seriously disturbing stop-motion animation, Basket Case is one of the most beloved, cheerfully demented cult classics of all time. Many discovered it in the days of VHS, but now Basket Case is reborn and remastered on Blu-ray for a new generation of twisted fans to enjoy. Open the basket if you dare!