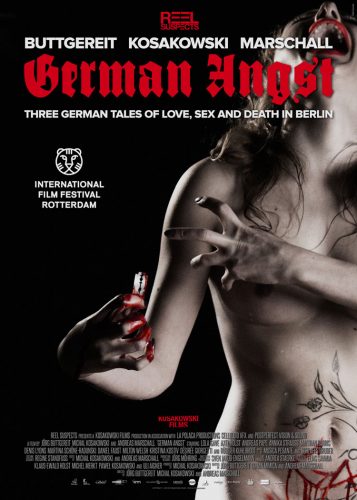 For the First Time Ever, the trilogy of love, sex, and death German Angst will have an Authentic Blu-ray Release. Artsploitation Films is packing it with TONS of Never Before Seen Bonus Footage. This Fully Loaded Special Edition will be available on June 19, 2018.

German Angst – Three German tales of love, sex and death in Berlin from Germany’s most shocking directors.“Final Girl” (Jörg Buttgereit)The first episode, tells the story of a young girl who lives with her guinea pig in a dirty apartment in Berlin. Seemingly a little lonely except for that bound and gagged man tied to her bed.“Make a Wish” (Michal Kosakowski)This gut-wrenching tale involves a young deaf-mute couple who are attacked by a group of skin-head hooligans. However, they are in possession of a mysterious talisman that could help them.“Alraune” (Andreas Marschall)The finale follows a man who stumbles upon a secret sex club that promises the ultimate sexual experience by using a drug made from the roots of the legendary Mandragora plant. But the ecstatic experiences have horrific side-effects.

German Angst from artsploitation on Vimeo.