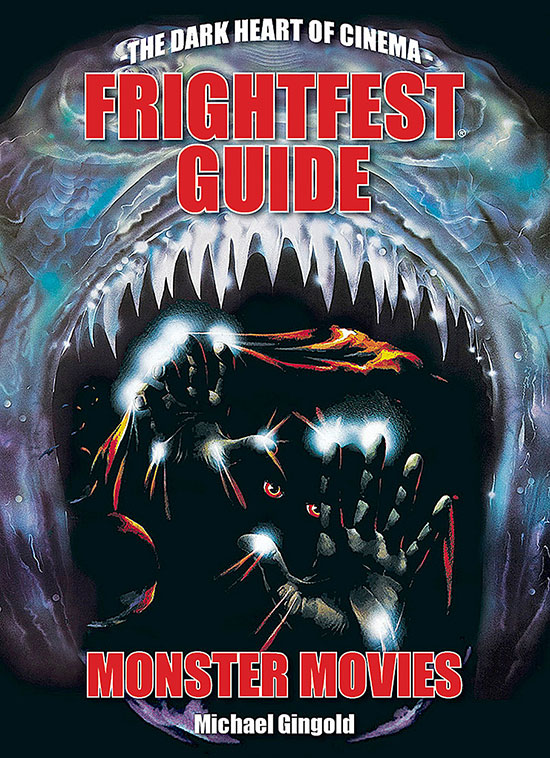 It seems about this time every year a new horror treat finds its way to my desk offering all sorts of horror genre classifications and information. This year is no exception with the latest being “The Frightfest Guide to Monster Movies” authored by Michael Gingold and published by FAB Press.

Now with that said there are 2 things worth noting. First, FAB Press has never failed to deliver an attractive color-filled product that I don’t enjoy. This 240 page soft cover book is eloquently designed, chock full of images, illustrations, and horror poster art pieces that range from photographs to paintings to poster artistry inclusions. The glossy pages explode with color and vibrancy that just makes it an entertaining read to work your way thru.

Second, we have none other than former Fangoria Editor-in-chief himself Michael Gingold providing the fact filled, historical and just in short,…..entertaining writing for this particular publishing release. If it’s flowing informative and genre-focused that you want, Michael is the one to deliver. A whole page is dedicated to Michael’s contributions and publication details culminating his rather impressive career in horror. Though really, when all is said and done, you know you’re in good hands!

The book begins by defining the idea of “what a monster is”, a rather heavy task in itself before taking us into a recommended overview of films that have arisen from the silent era times to present day offerings. Now if it wasn’t clear form the title, then the primary focus of this book is not all of horror as a whole, but the focus on films that centered on Monster-focused movies.

We are told about the variations and classifications of monsters that range from creatures, to aliens, to myths, beasts, legends, and reality-based creatures such as alligators and rabid sheep. While the inclusion of supernatural-based monsters are featured, this is not a book on all things possessed and demonic.

Now in retrospective of just simply flipping thru the pages, “The Frightfest Guide to Monster Movies” is a visual treat worthy of any sitting. You asked for monsters and this read is chock FULL of them, complete with colorful photos, art, and movie stills designed to entertain readers with a smattering of eye candy. Gamera, gorgons, King Kong, The Mummy, giant ants, or just giant creatures in general….you’ve got plenty to gaze upon!

I was happy to see that the book was not overly biased towards any key creatures and spent the extra time giving us creatures from movies such: “Galaxy of Terror”, “Dragonslayer”, “The Boogens”, “Clash of the titans”, “Critters”, evil clowns and even that White worm movie (to only name a few).

As expected, the book moves from older films into the latest releases (we even get a peak at those nasty Silent Hill Nurses) covering the gamut of monster-infused recommendations. After rolling thru the pages, I was even at a loss for what monsters “didn’t” make it into the book. The volume here is pretty well packed with colorful representations. You’ll even find the most recent “The Void” occupying a spot (to give you some perspective).

The context here is well written, informational and full of facts, figures and comparisons. Great stuff indeed and another smashing job tackled by the Fab Press team. You’d be advised to pick this up with many of their other releases (if quality horror books are your thing)!