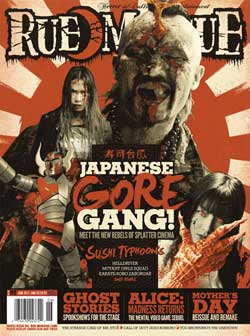 I’m always happy to receive a brand new copy of Rue in the mail. Though my face lit up a little more brighter when I noticed the latest issue sporting a Asian Gore tribute article. If you’ve followed our site in the past, yunno we spare no opportunity to watch, review or talk about anything that’s Asian, horror and wacky. So with that seque on to the goodz!

Sushi Typhoon is one of the up and coming players leading the new Asian horror revalution. They have proven insight into the US market and our westen affinity with this new style of Asian gore movies that have been making head waves in the horror genre. If you don’t know what I’m talking about, your in for a visual feast. By working with key players in the industry responsible for films like “Machine Girl”, “Tokyo Gore Police”, “Mutant Girls Squad” and others, they have set their sights on purely creating films that cater to this interest. Lucky for us! With “Hell Driver” soon to arrive, the interview posted covers a bit about the company, its players, crew and their insight regarding the genre. We learn that they are less supported by the Asian horror market than we would have thought. It’s an eye opener, as the interviewed describe this certain distaste that the Asian market has had towards this material. Meanwhile, we are eating it up like Pringles. It’s a nice piece that previews some of their projects, some tasty scene mentions and the opinions of these Asian gore masters. I would love to see a whole book dedicated to this aspect of horror, which I’m sure is just around the corner.

“Stage Fright” refers to a popular play and playhouse that has achieved some rather positive interest. A real time play that produces scares and chills…this is the kind of haunted house production that I’d pay to see. With crowds gathering, and long lines forming, this piece gives us a peek into the production itself and the minds behind it. I wish I lived closer to Toronto.

“Madder than a Hatter” is a new video game that also has an accompanied art book soon to be released. As described, the game sounds both intriguing and a haunting with some truly bizarre sequences inside bizarre visual environments. I’m not much of a game player, but I’d love to give this one a whirl.

“Mothers’ Day” pays tribute to the Troma release that leads into the 2011 release by the same name. Bousman gives us the break down on how he approached this remake (that isn’t quite a remake). We learn of other productions he has turned down and the work that went into the 2011 version. With a constant changing release date, Mother’s Day has been at our tongues for quite some time. If you get a chance one of our reviewers recently covered the release, though gave it a thumbs down. I, on the other hand will be checking it out myself, so I wouldn’t be writing it off so soon. Bousman tells us that the movie is high in visceral but done in a unique way. Depending on your own liking this could be a plus or minus….. time will tell. In any case, I’m calling “Mothers” Day” a must see just for historical reasons alone.

“Red White and Blue” is a film, that I’ve heard of but up until now may have left on the “to watch” shelf for a rainy day. Trevor Tuminski has raised my curiosity to the level of …..well, I’m just gonna “get to this right away now” attitude. One of my biggest attractions to film reviews in magazines is that I can quickly make a influenced decision on where I’m going to invest my time and those not as much.

Goremet pays tribute to a mag we’ve been covering since its release “Creepy Images”. I don’t have to read the article to know what we’ve always known. “Creepy images” is one bad ass old school art mag…hand down.

Ok, that’s all from the peanut gallery today, of course pick one up and check out the cool pics posted inside.