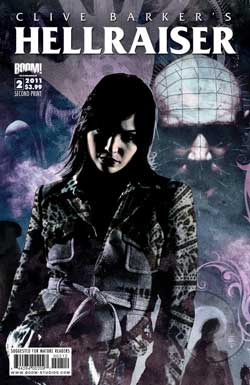 Ah, the 2nd edition of the new Hellraiser comic series from Boom. Uniquely, I have to say this comic is taking root in different directions. Not the kind we are to expect from say…. the earlier attempts at Hellraiser. What you can count on though is plenty of hooks flying and scenes of mangled corpses.

The 2nd release sort of begins in the sense of a film that you missed the first act and are trying to do a quick catch up to get on board. In that sense, there hasn’t really felt like there is any beginning yet to this series.

We are coming on board into a world and that has already established its characters, already has exposed its horrors and is preparing to show you a few sites that you haven’t seen. One in particular is this weird little maggot bug merry-go-round toy in which a group of cenobite experts have gathered before to take the hell dwellers head on by opening a portal on their own. We come to find that the “BOX” is not the only summoning device but soon might be. Kirsty is beyond compassion and her cohorts have already been exposed to some cenobium activity. In short we get to meet a few new demons who don’t take kindly to being summoned. Pinhead and partner prepare for bigger things.

The art is bold, sharp and has a great graphic edgeiness that feels like it was hand picked just for Hellraiser realization. My only complaint is that these issues don’t arrive any faster.