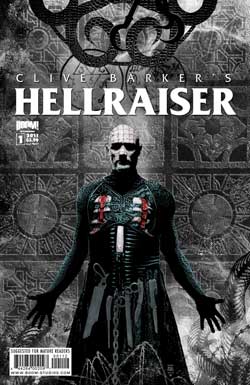 And so it begins…. The pins, the hooks, the sights, the cenobites. This represents the first in the debut comic series which boastly shouts “Clive Barker’s – Hellraiser! Boom Studios has taken the plunge into darkness, the kind that true fans of the series can appreciate and that new fans can descend into madness. With Issue #1, we are reunited with a few familiars. Kirsty Cotton, Pinhead, the Female Cenobite and a few of their buddies. Pinhead is doing as Pinhead does by torturing souls and sinking his tasty hooks into willing curiosity seekers. Though we have found this pope of Hell at a turning point. Namely his sights have worn out and he seeks redemption as a human.

His call to Leviathan offers a replacement named Samuel in request to be given a chance to redeem himself and possibly gain entrance to heaven. Now hold on there……is that correct? I’m guessing this change of heart is only fleeting which will ultimately lead to much more darker times. The issue sets the stage for things to come, while Kirsty seems to have a new fascination with painting. A new soul is visited by the cenobites fueled by a middle man who hangs in the background to seemingly deliver new souls into the depths of hell. Sounds to me like hell is coming and taking us with it. I’m looking forward to the new series which is beautifully illustrated featuring plenty of skinless corpses and a cenobite team that pops right out of the pages as if they were sending their hooky minions straight at you. Good News for the Hellraiser franchise and a recommended read indeed!!