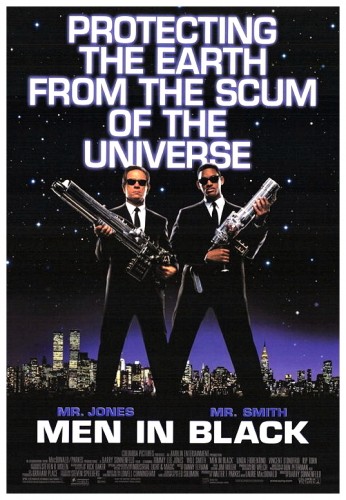 SYNOPSIS:
“Based on the comic book. Unbeknownst to other people, there is a private agency code named MiB. This agency is some kind of extra terrestrial surveillance corporation. Then, one of the agency’s finest men only going by the name ‘K’ is recruiting for a new addition to the agency. He has chosen James Edwards of the NYPD. Then, one day, a flying saucer crashes into Earth. This was an alien a part of the ‘Bug’ race. He takes the body of a farmer and heads to New York. He is searching for a super energy source called ‘The Galaxy’. Now, Agents J and K must stop the bug before it can escape with the galaxy.” (courtesy IMDB)

REVIEW:
Back in the late eighties, comic writer Lowell Cunningham first heard of the concept of a supposed covert government agency known only as The Men In Black and, in 1990, created a comic book with that title, written by Cunningham and illustrated by Sandy Carruthers. It was originally published by Aircel Comics, which was bought by Malibu Comics, which was subsequently purchased by Marvel Comics. The original story-line was much darker than the resulting family-friendly film adaptation. In the comics, The Men In Black are not only involved in alien activity, but supernatural activity as well. They maintain secrecy by any means necessary, and they also have a secret agenda to manipulate and reshape the world in their own image by keeping both the supernatural and extraterrestrials hidden from the general public. Only three issues were published that year, followed by another three the following year, but that was enough to convince Steven Spielberg that it had big-screen potential. 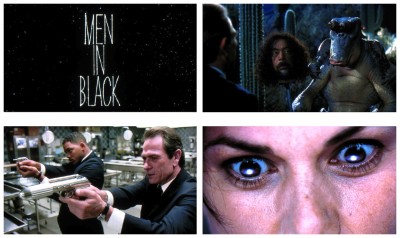 Men In Black (1997) was a movie project that had more than its fair share of problems before it finally saw the light of day as the surprise holiday blockbuster of the year. After Clint Eastwood turned it down, Tommy Lee Jones agreed to participate only after the script was rewritten to reflect the comic’s deadpan sense of humour. Will Smith, then famous for the popular television show The Fresh Prince Of Bel Air, was approached only after Chris O’Donnell and David Schwimmer had passed. Smith first rejected the part, then accepted only because his wife Jada Pinkett-Smith insisted he take it. Even director Barry Sonnenfeld didn’t come on board until John Landis, Les Mayfield and Quentin Tarantino had turned it down. Ed Solomon‘s script was being constantly rewritten during production, and Jurassic Park (1993) scribe David Koepp was brought in at the last minute to give it a more exciting climax, while eight months worth of animatronics research and development was simply thrown away in favour of forty-five computer-generated shots at a cost of US$100,000 per shot. 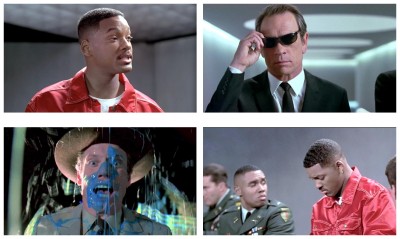 Plagued by such problems, it’s a miracle that the final result was so well received. Will Smith plays resourceful New York City undercover policeman James Edwards who inadvertently captures himself an alien, a cephlapoid to be exact. This so impresses agent Kay (Tommy Lee Jones), a longtime member of MIB Special Services, an elite organisation of top secret bureaucrats in charge with dealing with the constant influx of outer space visitors (legal and otherwise) to Earth. After demonstrating further outstanding attributes in an amusing tryout sequence, Edwards is indoctrinated into MIB under the identity of agent Jay. The head of the MIB, Zed (Rip Torn), describes Jay’s new life: “You don’t exist, you were never born. You’re no longer part of the system, you’re above the system, over it, beyond it. We are ‘Them’. We are ‘They’. We are The Men In Black!” 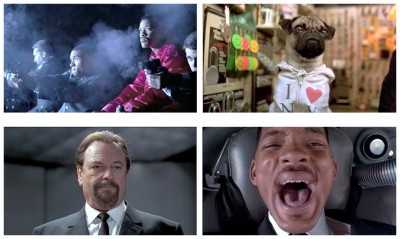 Kay informs Jay that there are fifteen hundred aliens in Manhattan alone but, specifically, they are on the hunt for an alien Bug named Edgar (Vincent D’Onofrio) described as a giant c**kroach with unlimited strength, a massive inferiority complex and a real short temper, which has sinister plans for destruction on a galactic scale. Men In Black is a tongue-in-cheek orchestration by director Sonnenfeld, who got his start as a cameraman for Joel Coen and Ethan Coen on Blood Simple (1984), Raising Arizona (1987) and Miller’s Crossing (1990). He quickly became one of Hollywood’s favourite cinematographers, shooting Throw Momma From The Train (1987), Big (1988), When Harry Met Sally (1989) and Misery (1990). Sonnenfeld’s career as a director has had its ups – The Addams Family (1991), Get Shorty (1995) – and downs – Addams Family Values (1993), For Love Or Money (1993) – but his oddball film-making pedigree was exactly what Men In Black required. 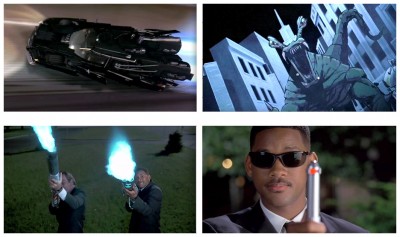 Visually Men In Black is awesome, thanks to the inspired work of makeup artist Rick Baker and production designer Bo Welch. However, it’s the deadpan flippant one-liners and intergalactic side-gags working in tandem with the outstanding visual style that gives the film a distinctly skewed humour all its own: “This is a universal translator. We’re not supposed to have it and I’ll tell you why. Human thought is so primitive it’s looked upon as an infectious disease throughout the greater galaxy.” But its vast commercial appeal may be attributed to factors outside the film’s mix of broad physical comedy, exciting action sequences and understated banter. More than anything else, the producers managed to capitalise on Smith’s popularity, not only as a television personality but especially as a mainstream hip-hop star, cast in Men In Black long before the enormously popular Independence Day (1996) was released. For not only did both films quickly become international box-office behemoths, but they immediately catapulted Smith into the category of Hollywood superstar. 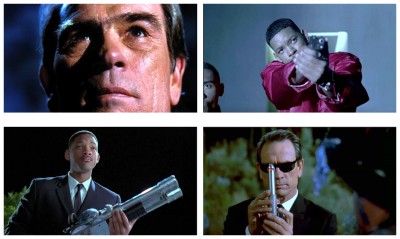 Despite the many differences between the film and the original comic (the agency monitors extraterrestrials but not the supernatural, Jay is African-American instead of Caucasian, memory-wipes are used instead of killing witnesses, the agency simply maintains order rather than attempting to control the world) most viewers didn’t know, didn’t care. The movie’s main marketing tool was, in this particular case, not the eye-catching poster but its music video, a glossy mini-narrative that featured characters, sets and props alongside spectacular scenes from the actual film. Sampling the 1982 song Forget Me Nots by Patrice Rushen, the track’s catchy repetition of the movie’s title guaranteed huge international exposure for both the film and its young star. Smith may have reaped the main rewards, but Jones remains the true star of the picture, outshining even the award-winning creature effects. Effortlessly convincing as the ‘been-there-done-that’ grizzled old veteran, he was able to bring both humour and unexpected conviction to some rather bizarre dialogue: “Put up your arms and all of your flippers!” 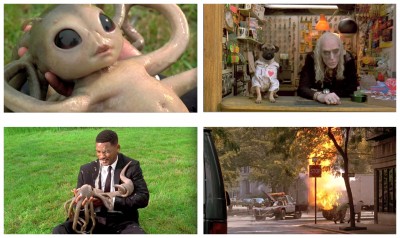 The DVD I recently viewed was chock-a-block full of interesting special features including the expected storyboard galleries, conceptual art galleries, production photo galleries, music video, trailers, extended/deleted scenes and a six-minute making-of featurette, but that’s not all! Technical Audio Commentary by Sonnenfeld, Baker, Eric Brevig, John Berton and Rob Coleman. Character Animation Studies detail the animating process for Mikey, Jeebs and the Worm Guys from preliminary sketches to final composites. From Concept To Completion is an animated conceptual art gallery of five aliens which morph from sketch to latex to complete creature, all at your command. More Fun is a breakdown of the climactic battle with Edgar Bug and provides an insight into the challenges faced by the actors working alongside a computer-generated co-star. The Metamorphosis Of MIB is a 23-minute documentary which tracks the evolution of the phenomenon from comic to screen and features interviews with the cast and crew, behind-the-scenes stuff and unseen footage from the editor’s cut. 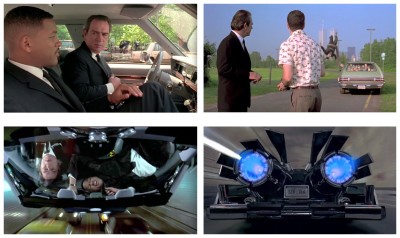 Live Audio Commentary is by Sonnenfeld and Jones, whose animated silhouettes gesticulate enthusiastically from the bottom of the screen (not unlike Mystery Science Theatre 3000) pointing out specific onscreen highlights. Interactive Visual Effects Demonstration, introduced by Sonnenfeld, employs the multi-angle function for a breakdown of the effects shots required to realise the car tunnel sequence, from storyboards to greenscreen composites to the final cut with optional commentary by Industrial Light & Magic. Scene Editing Workshop is a brilliant interactive concept for you to customise your own MIB scene utilising raw footage from the Farmhouse, Morgue or Audition scenes (in fact it was the first time this particular feature was ever made available on a DVD), just choose from a combination of shots and cut together your own version of the scene while Sonnenfeld offers tips, then see how you fare against the director’s cut. 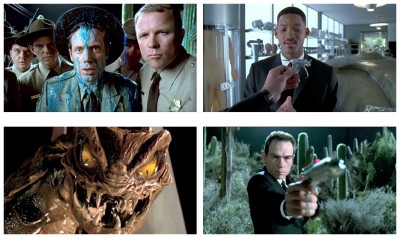 A lot of water has passed under the metaphor since and, despite several attempts, the team has so far been unable to make lightning strike twice. Amblin produced four seasons of an animated show entitled Men In Black The Series, which ran from 1997 to 2001 and featured several of the film’s actors reprising their roles including Tony Shalhoub, Vincent D’Onofrio, Eddie Barth, Patrick Pinney and Pat Fraley. Then producer Jon Peters asked Sonnenfeld to direct Wild Wild West (1999) starring Smith and Kevin Kline which was widely regarded as an expensive disappointment. In a practice that has become all-too-common in Hollywood today, they took an excellent original script (in which H.G. Wells, Jules Verne and Mark Twain are forced to design war machines by a vengeful Southern General) and simply slapped an old television title on it as an afterthought. I Spy (2002) is just one other example of this disturbing practice – but I digress. As one critic put it: “Bombastic, manic and largely laugh-free, Wild Wild West is a bizarre misfire in which greater care was lavished upon the special effects than on the script.” 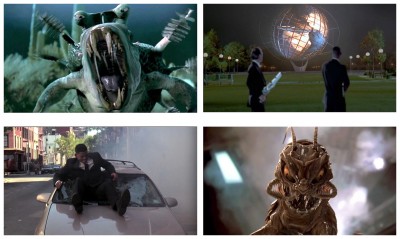 Men In Black introduced Sonnenfeld to the potential of adapting comics, and discovered the hilarious superhero parody The Tick created by the imaginative and prolific Ben Edlund. The Tick was turned into a live-action television situation comedy in 2001 starring Patrick Warburton, while Sonnenfeld produced and even directed the pilot. Despite being canceled after only nine episodes, The Tick is fondly remembered and highly praised by fans and critics alike. It was well-written with just enough special effects to make this skewered world of superheroes believable. It was daring, ingenious, silly and fearless – of course the show was doomed to fail. Thanks to Will Smith‘s persistence in ‘getting the gang back together’ we were finally treated to a sequel imaginatively titled Men In Black II (2002), with Lara Flynn Boyle, Johnny Knoxville, Peter Graves and Rosario Dawson joining the cast of the original. Although the film easily made its money back, it was considered by many critics as a mediocre sequel at best, the real highlight being not the comedy nor the performances, but Industrial Light & Magic‘s special effects and Baker’s makeup. 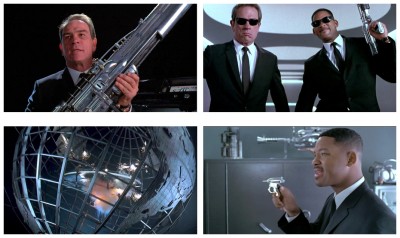 Many viewers considered Men In Black III (2012) a huge improvement over the second film, largely due to the excellent performances of Josh Brolin (as young agent Kay) and Jemaine Clement (as Boris The Animal). Both Smith and Jones have made it clear that they’d gladly consider a fourth Men In Black film and, according to Columbia Pictures chief Doug Belgrad: “We’re very pleased with the financial performance of Men In Black III and we believe it is an ongoing franchise. We’re going to do another one, but we don’t have clarity yet on how it should be done.” Special mention should be made of the recent release of R.I.P.D. (2013) starring Ryan Reynolds and Jeff Bridges which contains many of the same ingredients that made the original Men In Black film work, but different enough to be extremely entertaining in its own right. It’s at this point I’ll now ask you to please join me again next week when I have the opportunity to tickle your fear-fancier with another feather from that cinematic ugly duckling known as Horrorwoodland for…Horror News! Toodles! 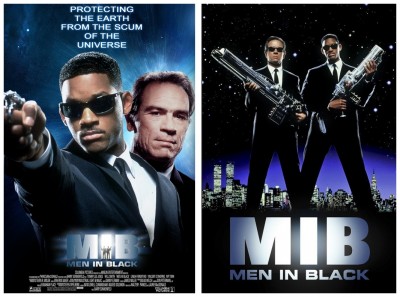