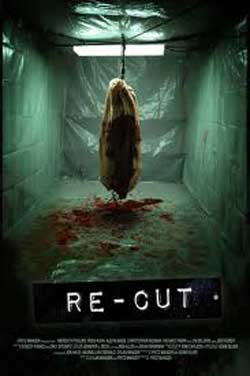 Following the discovery of the murder of two twin girls in their family’s barn, a former reality TV-star is dispatched by a TV-news station to uncover the mystery behind their gruesome deaths.

The idea of the actual existence of “snuff films” is one that has been presented in several horror films. My personal favorite among these is “Vacancy” starring Kate Beckinsale and Luke Wilson. It’s nice to see the big studios get a horror film right for a change. “Re-cut” offers another look into possibility of snuff films but to its credit manages to give a few good surprises to the viewer. Yes, it is yet another faux documentary movie (these are getting kind of old), yes, you can probably guess most of the end, yes, you’ve seen some of this before but even with all of the above faults it still has enough going to keep the viewer entertained. Credit director Fritz Manger for giving this story just enough of a new twist.

The movie opens with a proper definition of a snuff film. “A p*rnographic film that shows an actual murder of one of the performers, as at the end of a sadistic event.” Next on the screen reads, “Though deaths have been captured on film, snuff films have always been regarded as urban legend.” Finally comes the required faux documentary disclaimer, “In the fall of 2009, the following video was intercepted by the Internet Crimes Division of the FBI.” I have to admit I’m a sucker for these kinds of openings. It all sounds so real and creepy and your mind immediately starts thinking about what could have possibly happened to these poor souls.

Meredith Phillips (actually playing herself which I have to say is pretty darn cool, she was on The Bachelorette in 2004) is back in Wisconsin after being on a reality show. She is finding further fame elusive and is currently a field reporter for a local news station. Adam and David are two young men who have just made a very long road trip to shoot a documentary about Meredith and the trials and tribulations of being on a reality show. Together they end up finding themselves trying to solve a local murder. Seems that John Fowler murdered his young twin daughters and is now nowhere to be found. Did he actually do it? And what exactly happened out at the Fowler farm?

Typical resistance comes from pretty much everyone in town, right down to the sheriff. The locals are predictably creepy and let’s just say a little off-kilter. Poor Meredith is continually being asked if she’s been on television, perhaps that one dating show? Frustrated at the lack of cooperation, they decide to do some investigating of their own and head out to the Fowler farm. Can anybody say big mistake?

Re-cut is a solid horror movie that is not at all what you think it is going to be. To be honest that is probably why I enjoyed it. The atmosphere is very well done, I mean, I’m sure Wisconsin is a lovely state but it’s movies like this that might make you think twice about straying off the beaten path should you happen to visit. Very gloomy and desolate and it’s this very real sense of isolation that just fills you up with dread.

Surprisingly there is very little in the way of blood and gore but that doesn’t mean you won’t wince once or twice. One scene will definitely have the guys squirming and hoping they never have a run in with a certain piece of farm equipment. In fact, all of this implied violence might turn some viewers off. Sounds strange to say but with the great intro and the supposed topic of snuff films you might think gore on the level of, say, “Hostel.” Nope. In fact, I really wouldn’t categorize the film as even being close to snuff related. Wait, what did I just say?

I know, I know, what with the intro and all isn’t it kind of cheap of the filmmakers to mislead the audience into thinking they’re seeing one kind of film but then deliver another? Perhaps. And that fact will definitely anger some. It does make for an interesting watch. I would have to rate Re-cut a rental, good to see once, a few out there might think about purchasing but I wouldn’t without seeing it first. It certainly does not reinvent the wheel but with a few plot twists thrown in manages to rise above your standard faux-doc horror film.