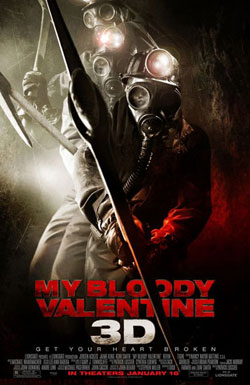 Tom (Ackles) returns to his hometown on the tenth anniversary of the Valentine’s night massacre that claimed the lives of 22 people. Instead of a homecoming, however, Tom finds himself suspected of committing the murders, and it seems like his old flame (King) is the only one will believes he’s innocent.

My Bloody Valentine, some of you might be too young to remember the first one. That’s ok, it was created in the 80’s (1981) to be exact. And it was a blip on the radar of other such films of its time. Slasher fare as they were called. Now we roll around into 2009 and the surprise hit this season is the remake now presented in 3D. As of today box office reports $23 million overshadowing last weeks “The Unborn”. To be fair though part of that report includes a $3 charge per person for glasses in addition to ticket price. So what is it that makes this remake stand out from other of its kind?

3D
For one, horror has presented a handful of 3d films in the past. Ones that come to mind were “Friday the 13th – 3”, and “Jaws 3” (was it 3?) Now fast forward into the 21st century and we have 3D presented in full color, high definition, surround sound and improved 3d technology. Yes, I stand my ground to say My bloody Valentine 3D is one of the finest 3D films I’ve seen in a while that isn’t digital animation. The film takes full advantage of the idea with numerous jump out to the audience shots. With well planned shots that work to the advantage of the film and not just gratuitous the formula works the way it was intended. It also makes this a perfect movie experience for horror fans looking for chills and visual bonuses.

Main titles:
One of the cooler title sequences I’ve seen recently. Not that its a total original idea, but it uses the 3D to its advantage by using animated text and visuals in 3d space along with the 3D visual medium. So with the 2 combined we have letters and imagery flying out with greater effect. Through tunnels, newspapers, photos and break away text this segment is a great intro to the film.

First area of agenda is, does this film hold to the original and does it deliver? Well taking the liberty to re-watch the original, this movie kicks its ass hands down. The story has been changed so it is a “different” film besides it being 3D but it’s also a better story. C’mon really…who do you know who goes around stating “My Bloody Valentine” (1981) was an influence? It was a horror film from the 80’s that didnt stand out any more than “Dressed to Kill” of “Happy Birthday to me”.

There is no arguing that the filmmakers did there duty by keeping the “style” of the film old school, No I don’t mean 80’s film stock, I’m referring to the old school style of scares. It can easily hold up to the fear inducing format of Halloween, Friday the 13th, and Texas Chainsaw. I know that comment may open this up to debate, but of course its subjective. (OK, I give…maybe not Texas Chainsaw)

Call it a date movie if you like but this film moves right out of the box . Any slowdowns in this film were only incorporated to drive the plot, the action keeps going from scene 1 to the very lastly frame. To make the point MBV starts off with a bang as Harry Warden wakes form a coma due to a miner accident that happened. Left in his wake are several gutted, dismembered and pick-axed bodies laid out among the hospital floor. In 3D you can almost touch the corpses which add a new sense of realism. Harry suits up in his best miner uniform to terrorize and slaughter a group of kids partying at he old mine entrance. This and more chaos takes place in the past. Now 10 years later, we find ourselves back in the small mining town in which murders have started ramping up pretty fast and pretty gruesome. 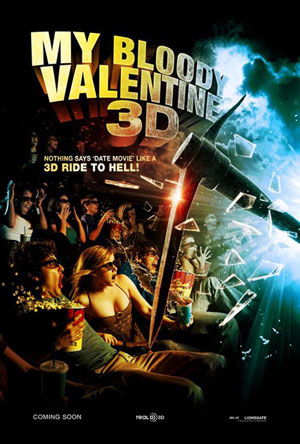 In comes Tom Hanniger (Jensen Ackles) son to the owner of the mine intent on selling it off to rid himself of his horrible past memories. His former love interest Sarah Palmer (Jaime King) is now married to the chief of police Axel Palmer (Kerr Smith) and has a family. Besides the obvious, intentions of rekindling old flames, there is the added issue of a town massacre occuring that suggests that Harry Warden is back at it. This makes life difficult for an old face showing up at the wrong time that makes Tom an primary suspect. Add to that the conflict of Axel trying to deal with Tom as his wife’s old flame. Now drama aside, there is alot of killing going on in this film! Actress (Betsy Rue) who plays Irene spends 10 minutes running around in full front and back nudity and does so with confidence. She also gets axed pretty intensely just to drive the brutality home. As you get the idea, there ends up being a pretty high body count while also delving into the mystery of the real identity of the killer. FX work on this was handled by Gary J. Tunnicliffe and his team, and let me tell you …this one is one to add to the resume.

Jensen Ackles does a stellar job in his away-from-“Supernatural series” performance. I kept expecting though to see Sam, his on screen brother show up. But we all know by now he’s busy on the Friday the 13th gig. For purists we have the famed “washing machine” scene added in for fan boys who remember it from the original. Hey how could you forget, it was one of the more shocking memorable scenes of that era. Lastly, this film is guessing game as you compare notes back and forth with your viewing buddies as to who the killer may be….. fun stuff. My Bloody Valentine comes highly recommended! A roller coaster suspense ride done old school! check it out on the big screen in 3D…Even if you don’t like the film the 3D is a really cool experience. 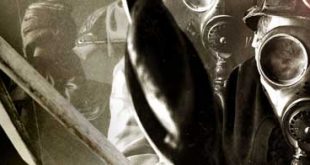