Greetings fell beings of the evening, today we’ll be discussing sex and violence in slasher films. What do they contribute thematically to the genre of horror? Can we have a slasher film without these two aspects appearing prominently in them? Let’s dive in and find the answers to our questions. Dim the lights and open your Necronomicon as we ascertain the reason that sex and violence are so prevalently displayed in slasher films.

We’ve all seen it before. The teenagers sneaking into private property after dark. Slipping through a chain-link fence to get into a pool after hours or embarking on an adventure to party to their hearts’ content. Then enter in the masked man, the horribly scarred or deformed killer. The backwoods, inbred, or religious zealot dedicated to stalking the steps of the young to rob them of their lives. The formula for slasher films is simple and it’s been remarkably effective over the years. You need look no further than the Friday the 13th franchise, the Nightmare on Elm Street series, or the iconic Halloween films to find a very common set of tropes. The first of which is violence. Slasher films are exploitative in that they often depict gruesome deaths and hold us in suspense with near misses. It’s difficult to have a slasher movie without depictions of violence.

More cerebral horror films do exist that focus more on the torment of the mind or more abstract concepts that fuel our anxiety, but slasher films function differently. Violence is a staple in the slasher film and has been for quite some time. Look back to films such as My Bloody Valentine, Texas Chainsaw Massacre, and The Town That Dreaded Sundown, (a few earlier examples of slasher films), and you can’t deny the necessity for displays of violence to sell the story.

Violence gives shock-value and inspires fear within the audience witnessing it. It speaks to our darker nature and the gruesome capability of men to do wicked things. So, with that I think it is safe to say that slasher films rely on displays of violence to be what they are. Without gruesome displays of cruelty toward our would-be victims, slasher films just wouldn’t be the same.

Now that we’ve looked at the role of violence in slasher films, it’s only fitting that we examine the other very common trope that is an integral part of slasher films: sex. So many iconic scream queens have been forged by their role in portraying sex in horror films. Jamie Lee Curtis, Neve Campbell, Danielle Harris, Janet Leigh, and Julie Strain are among the numerous women we have fawned over and rooted for over the years. Sex is a primal desire that nearly every living thing is driven toward, and human beings are no different. We crave gratification and we strive toward our desires. Slasher films often portray sex as something that can get you killed, in other words a distraction from what you should be focused on. We’ve seen many characters get offed in their attempts to “get off” and it’s really added to the flavor. The old adage sex sells has been true since the days of old and sex still sells. Slasher movies have played to our curiosity and our desire for years, teasing us with pretty girl-next-door figures, femme fatales, and body count fodder that have become a staple for the genre. 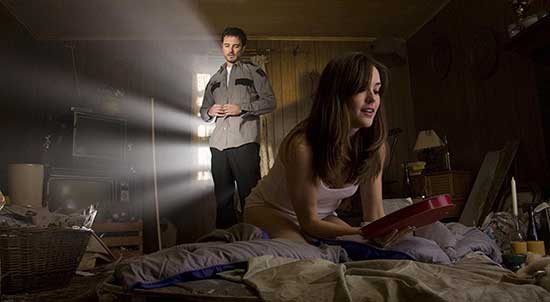 To summarize, sex and violence have become an integral part of the slasher film genre. They have cemented themselves as key ingredients for any decent slasher film. They are the reason we shell out the cash to see our favorite killers chase our favorite heroines and heroes. They play to our desire and our darkness all at once driving us to keep watching. So long as people have a desire to see beautiful people naked and annoying people die, sex and violence are here to stay, especially in slasher films.