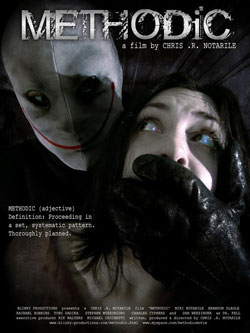 Methodic tells the story of a boy who becomes demonically possessed by an ominous presence known as “The Dollman”. Forced to obey his dark half, the boy ultimately murders his parents on his birthday and is sentenced to a life under a microscope at the state mental hospital. But evil cannot be contained so easily. Instead, “The Dollman” simply bides his time, dwelling within the boy- waiting for the day when he will become powerful enough to completely take over his human host. And when that day comes, god help us all.

Before watching this film I got a chance to do an interview with the director Chris Notarile. He explained to me that he wanted to remake HALLOWEEN but was beat to the punch by Rob Zombie so he made a few changes and created Methodic.

This film gives me mixed emotions because there were some really good parts but also some very rushed and poor production value among other things. The film is centered around a boy who murders his parents after becoming assumingly possessed by an entity called “Doll Man”. No explanation through out the entire movie where this entity comes from but nonetheless he is there. Doll Man gets this boy to brutally murder his parents before being taken down by his older sister who catches him seconds before he can murder their baby sister.

The boy is admitted into an insane asylum where he stays for 20 years under the care of the staff and watchful eye of his “uncle” Dan who was a friend of the family and also a policeman.

The story picks up when the baby sister, now an adult, decides that she wants to finally meet her brother much to the dismay of her sister and their uncle is hot on the heels of a criminal. These are two different parts of the film until Dan suffers a heart attack after him and his partner go after a criminal causing the attack the same night that the boy escapes from the mental institution after an emotional visit from his little sister. Mayhem ensues as the uncle’s partner tries to track down the boy before he finds his unsuspecting sisters.

I favor a lot of the kill scenes in this film for the fact that they are brutal and viciously executed. The boy, now a man, really beats the living crap out of these people in an outraged and fast paced manner. Its none of the ‘slow and meticulous’ beating that we see in a lot of films where it almost leaves you annoyed. I was appreciative of them for that. It almost makes you wanna curl up and yell ‘holy crap’ as he really gives it to some of these people.

The story line could have been a lot better with a little more explanation and character development. It leaves too much out and you find yourself feeling like there was no use for a lot of what was involved in the film. As I mentioned earlier, there is no explanation as to where Doll Man comes from whatsoever. It’s kind of like “hey, it’s a boys 9th birthday and so this evil thing possesses him for no reason, makes him kill people. It can also be passed on from person to person for no apparent reason as well.” Is it a demon, a ghost, an entity attached to something this boy got for his birthday, the angry ex Toys-r-us worker who got laid off and is now taking his anger out on the little twerps he hated working around in the first place? I have no clue, wish I could tell you.

The acting kind of swayed back and forth throughout the film. In some scenes it was really believable and engrossing but the very next scene those same characters were very uptight or ‘overdoing it’. There is a scene at the end where two sisters are crying that seemed VERY fake and over the top. It was almost like a contest of who could fake outcry the other. I do have to say I laughed at the scene so maybe it had its purpose.

One thing that also struck me is how rushed the entire film’s production value seemed. There are a few issues with bad frames where people’s faces were strangely shot, poor lighting and sound, and in a certain part of the film you can see the boom mike dip in and out of the frame. It didn’t seem as if an experienced person worked on the post or editing. It was almost like it was put together with superglue instead of cement.

It’s not bad enough to kill the movie but it is noticeable some parts of the film. Things just seemed too rushed for my ability to give it a good review on that end.

All in all I wouldn’t say this is a film you shouldn’t see. It has some pretty cool parts in it and can be appreciated for a few things it has in store for the audience. And for my sex fiend readers, not only is there a sex scene but it is two chicks. It’s a pretty heavy one as well, so that should make some of you happy. Haha I liked this film as a surface film. I just wish the few minor glitches and holes would have been fixed before releasing it. 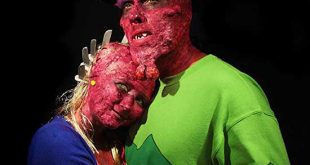 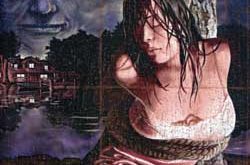 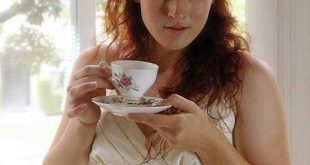